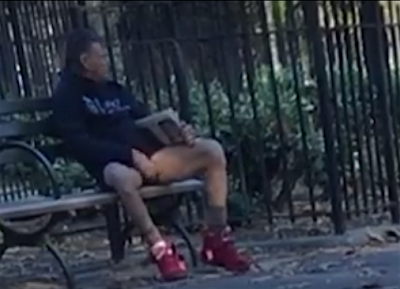 Several readers shared information about a man who was seen exposing himself in Tompkins Square Park near the children's playground yesterday afternoon around 12:30.

The man "began threatening some dog owners with a brick when they chased him away. He lost his pants and cellphone as he ran off which were given to the police — however it’s unclear whether the police will pursue as the dog owners stated the police told them they needed to come to the precinct to make a complaint.

The Facebook post has a NSFW video clip of the man fondling himself as well as a photo of him on First Avenue and 13th Street holding a brick and carrying his pants. He appears to be wearing lipstick.

One reader said the man is known in the Park and was spotted rubbing his genitals in front of two women last fall. (See this post.)
Posted by Grieve at 7:49 PM

What the fuck is going on here with the NYPD? Where does it say you have to go the nearest precinct? This looks like a concerted effort not to document criminal activity. Is it because it might bring down exorbitant real estate speculation?

What's it going to take? There was that woman who got assaulted just for telling a dick not to crowd her on a train seat and she had to go through the same bullshit with two different precincts. Fortunately for her, her story got major attention in the papers and the cops who intentionally gave her the runaround got embarrassed to finally take action after they were called on their bullshit.

Well, maybe you should just show these two posts and hope the Daily news or the NY post picks it up.

NYPD literally did nothing ? great. thanks.

NYPD once again useless; sadly this is not surprising.

Or perhaps my understanding of the NYPD's function is faulty.

Who decided that this needs further proof/complaint at the precinct? Photos AND a video clip AND a bunch of dog owners alerting the police - all of this is somehow insufficient? Be glad the guy only had a brick and not a gun.

A year ago this guy pulled his dick out right in front of me as I passed him with my dog while walking up 2nd avenue at 14th street, around 9 am.
This summer I caught him looking at me from across the park by the virtues fountain in Tompkins, rubbing his junk. I yelled at him and then told the police that were parked at the 9th street and a entrance. Those bum ass cops drove right by him even though they were so close to him and very capable of confronting him.

It’s just so very sad to see how far Matt Lauer has fallen.

This guy should run for a congressional seat in Alabama since stalking little girls is considered more sanctified than having progressive beliefs. Or take over Weinstein's chair at the producers guild, have the coat check girl hold his pants.

Last night on my way home, I walked through Tompkins Park. It was dark toward the Ave B and 7th Entrance, but a man, who bares a resemblance to this man who exposed himself, shouted obscenities toward me and two younger men near the playground entrance. He leaned over a fence and howled like a wolf. I won't repeat what he said, but it was inappropriate and disturbing. I think he is either mentally ill or an addict or both. Nonetheless, he needs help. Very sad :(

When the NYPD put up a tower in the park the reaction was get the police out of here....
Now all the sudden its where are they?

This is despicable. His lipstick isn't even the same shade of red as his shoes. Clearly he is a mental case.

I guess eccentricity ends when a penis is out in the open. Not a mental health professional but my money is on this man is suffering from mental illness. Instead of calling the police call the proper city agency to come and have a look at him.

Anon 9:36 - the problem with the tower was that it was a tower. An intimidating 1984 watchtower. Fuck that. That's different than a couple of cops walking through the park.

11:05 please identify the city agency that will come and look at him based upon a phone call. And what if he doesn't want to be looked at?

The police need to take this kind of behavior seriously.

They act like some guy exposing himself in the park isn't a big deal. It is a big deal. And the man has shown he will go on the attack.

What are they waiting for?

They should be circulating his photo all around NYC so someone can ID him.

If I saw this guy doing this, he'd need more than a brick to deal with what I'd do to him. And if he's mentally ill, then someone in charge in NYC needs to get him OFF THE STREETS. He's a threat to regular people going about their business.

De Blah-sio is reversing every gain made in this city in the past 30 years.

Forget mental illness...this guy is an aggressive sex offender, exposing himself next to a children's playground. He was also carrying a brick and a stick which can be seen in the photo of him crossing the street. He also Maced someone who challenged him.
He needs to be arrested, which given the apathetic way the local police view this seems unlikely. Failing that, he needs a beating. Unfortunate but true.

So many cop critics. Try walking a mile in their shoes. I was never against the tower. Didn't bother, offend or anger me. Bring it back and I'll carry on just fine.

This is how nypd keeps crime rates down... by NOT taking reports. Same bullshit from years ago. The 9th has been known as the most corrupt precinct historically. Just keepin' with their tradition.

Don’t get me started on the 9th P. My upstairs neighbor showed up on my fire escape at 4am one morning and scared the shit out of me. I saw him run up into his apartment window. I called 911, the 9th showed up, knocked on his door - surprise, no answer - and refused to take a report. He and his friends stalked me for months.

Why the hell are all of you people posting as anonymous? If you're not coming forth here I hope you walk yourself over to the 9th Precinct at 321 East 5 Street (Between 1st & 2nd Avenues) and put in a report, ask for Captain Vincent Greany if nobody will listen. We need to step up and end this kind of crap. Snap a pics or vids if you see him and flood their twitter @NYPD9Pct

At the protest by Cipriani's on 42nd st where Figurehead Trump was celebrating the senate passage of the oligarch welfare tax cut bill, there was the typical phalanx of cops monitoring the gathering and militarized patrolmen brandishing automatic rifles. Yet not even one cop can be deployed to catch a disgusting man habitually exposing himself and randomly threatening the citizenry for a good 2 years.

This is who and where we and society are at this moment.