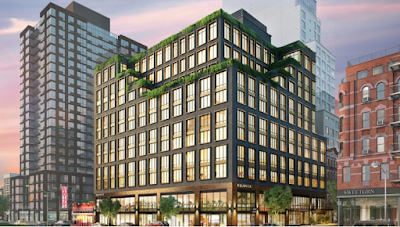 The Robb Report checks in today with an update on Ben Shaoul's 11-story, 94-unit condoplex on East Houston at Orchard Street.

Adam Rolston, creative and managing director at INC. Architecture & Design, discusses the handmade glazed bricks that they imported from a small fishing village in Spain for this development.

Rolston wanted a handmade, metallic-glazed brick that would evoke the old-world character of glazed terra-cotta while also bringing a touch of luxury. He found it in Cadaqués, a small community in Spain formerly visited by artists such as Picasso and Miró. “We went to Europe to find a handmade, metallic-glazed brick — and specifically the Costa Brava of Spain where this particular handmade brick-making tradition survives,” Rolston says.

The hand-laid, gilded-bronze brick — which reaches the second floor of the building — is infused with gold dust that becomes more golden over time as it oxidizes in the air. Imported directly from Cadaqués, the brick cannot be replicated in the United States, meaning that the building has a truly distinct and one-of-a-kind look.

The building will also benefit from a truly distinct and one-of-a-kind aroma from Katz's next door.

Send a salami to your boy next door in the condo
Posted by Grieve at 9:09 PM

Hmmm gold dust that oxidates is not made with gold.

And they’ll be shitting bricks if these apartments don’t sell before the next inevitable stock market crash.

bespoke bricks for tenants who will netflix and chill. meteor please.

Taggers will make this building even more unique.

bespoke bricks for tenants who will netflix and chill. meteor please.

We've got fewer than ten years on this planet before the human race is extinct, thanks to climate change. So let them have fun while they can!

When it is time for local law 11 to kick in they are fresh out of hand made bricks from Spain as replacements will they just splatter ordinary bricks with gold paint and watch them age?

Positioned at the gates of Hell's Square" woo!

Glazed with the blood of the poor!

The aroma from Katz' Deli, which sold air rights that made creating this monstrosity that exceeds reasonable building height and density for this block while displacing 10 neighborhood businesses STINKS!!