Catching up with the hardcore matinee crowd

The Bowery's all-ages, hardcore matinee shows were a ritual for young outcasts, free thinkers and activists. All these years later, what's become of those kids? https://t.co/ylKyozIaNg pic.twitter.com/as6xb8IeIf


NPR has a feature today on "Matinee: All Ages On The Bowery," Drew Carolan's photo book on the afternoon hardcore scene at CBGB from 1983-1985 ... Carolan, who grew up on the LES, photographed people coming and going to the matinees.

At NPR, there's a now-and-then feature that shows what some of the people featured in the book are doing today... such as Joshua:

In hindsight, I think that my early adolescent treks from Staten Island to the Bowery to catch the weekly matinee at CBGB's may have been training me to spend my life on the road. After getting out of university I started traveling more seriously, eventually expatriating when I was 24. Since then, I've probably spent half my life living overseas, working mostly as a journalist and travel writer in Taiwan, Hong Kong and China. I have a new book coming out in 2018 — my 14th — titled Formosa Moon and have recently switched from original Star Trek "continuing journey" mode to a more Deep Space Nine mode by hooking up with a Taiwanese travel company that does custom tours around the country. It kind of fits, in a weird way. There's a decent punk scene here, and Beijing calls us a renegade province, so yeah, there's that. Currently listening to: Kou Chou Ching, The White Eyes, Frank Zappa, Gentle Giant, Yes, Bad Brains, The Germs, Black Flag, Minor Threat

There's a book celebration Saturday over at Generation Records on Thompson Street ... and another one Dec. 8 at Rough Trade in Williamsburg. 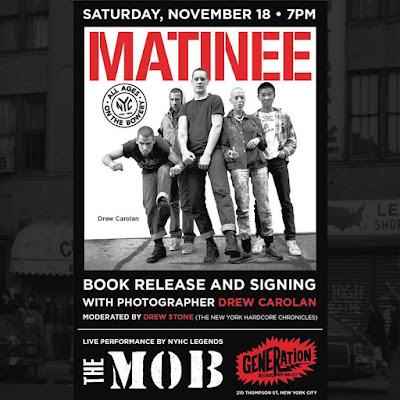 See, they weren't such bad kids after all.