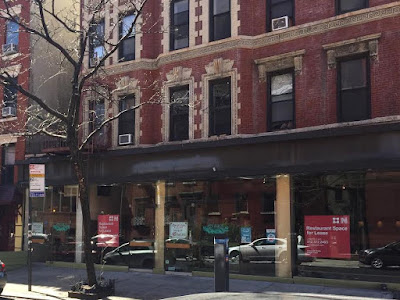 [Photo from April by Steven]

A new tenant has leased the space last occupied by Angelica Kitchen at 300 E. 12th St. at Second Avenue.

According to an Instagram post yesterday by the broker, the address will soon be home to "the famous Chinese Lan Zhou noodle restaurant!"

It's not immediately clear which restaurant she means... perhaps another branch of Lan Zhou Handmade Noodles in the New World Mall Food Court in Flushing ... or Lanzhou Hand Pulled Noodles on Roosevelt Avenue in Flushing.

Anyway, as for Angelica, Leslie McEachern's vegan restaurant, which first opened on St. Mark's Place in 1976, shut down after service back on April 7. McEachern said that "making the numbers work week in and week out is just not viable for us anymore."

Previously on EV Grieve:
Angelica Kitchen closing on April 7; friends raising money to pay off expenses (61 comments)
Posted by Grieve at 4:25 AM

Oh good. East Village is so lacking in noodles shops.

Well that should be interesting for the Hot Pot shop right next door...

What with that and Wagamama, there won't be any shortage of high-priced noodle places around; and it's going to have to be high-priced b/c otherwise how can they pay the rent?

This economy is the absolute opposite of economic; it's wasteful and foolish. The need for a top-down, command and control economy has never been more evident. Think of all the time, money and resources wasted on these ridiculous ventures. It's almost as if we want everything to fail.

Where can you get a decent bacon / lettuce / tomato sandwich? Please don't let's have a vegan attack. Some people have other preferences.

Barnyard on B would be best
Sonny and Annies might make one but would be confused you don’t want 14 ingredients and toppings...
Ciao for now might make one too
If you want a real pig fat sandwich though try Russos
And then... any diner.. Little Poland would be this anonymous persons choice

What's the problem with noodles? I think there is resentment because these are Asian businesses. The more the merrier. I am happy to have a noodle shop on the block.

Easiest thing to make at home. Can't you do that for yourself?

@11:33am: You seem to be advocating for a dictatorship.

Right now, we're still living in a capitalist society (however twisted it gets), which allows people to try out their ideas & risk their money to open a business which may or may not succeed.

I can only imagine what "top down command and control" rule would get us. (And BTW, who gets to be the "top"?!)

No problem with noodles with 1:46 PM. But if you're going to invest in a business in an expensive, competitive environment maybe you should following what everyone else is doing, unless you're sure you can do it better. I guarantee you half or more of the new noodle places will be gone after a year or two. Yeah, it's their money to spend, so maybe I shouldn't be annoyed by the apparent lack of common sense. I had a bowl of lamb noodles at one of the new places on First Avenue, and I was very unimpressed at the flavors for $14. And why so little bok choy, which is cheap? And only a smidgen of hot sauce, which is also cheap...