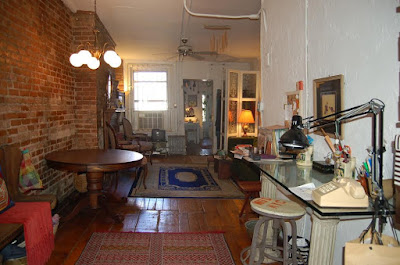 When the building and the neighborhood started changing the people who were moving in were not musicians or artists and they had day jobs. The landlord approached me and offered me a buyout. I got myself a lawyer. She got me not a huge amount of money but I was able to stay in the apartment for up to a year until I could find a new place. It covered my moving expenses, plus I got some cash. 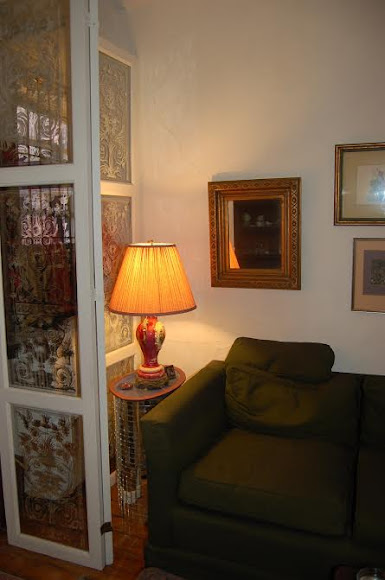 How did you find your East Village apartment?

I had a boyfriend who was living on Seventh Street and I was working downtown. I had to be at my job at 11 a.m. Every day, from 9-10:30 a.m., I walked around the neighborhood and talked to people. I rang the doorbell at a storefront looking for the super. A woman answered. She was living there, but was not a super. She wrote for Al Goldstein’s Screw magazine. Her husband was a lighting designer. She had been in the neighborhood for years. She gave me a cup of tea and a joint. She told me if she heard of anything she would give me a call.

A week later she called me and said the girl on the top floor is moving. I went to look at the apartment. There were walls with interior windows. Because of the slope the rooms were all rhomboids, in other words you got dizzy just standing here because they were all so askew. The boyfriend of the woman living there must have gotten paid in supplies because there was sheetrock stacked up and boxes of supplies everywhere. But I looked at the height of the ceilings and the view. And I just knew this was it.

The landlord, Arthur Brown, owned most of the block. He was a wonderful guy. His deal for all of his tenants was if you supplied the labor and included the receipts for supplies for work done, you could take that amount off of your rent.

I still say to people who are looking for an apartment: Choose your neighborhood and then spend time there walking around and talking to people. You will find something.

When I moved in I worked with a guy who lived in another building. We took all the plaster off of the walls. Something, actually, that I’m sorry I did. The brick dust is just endless. We took down the interior walls. I like the openness. We took all of the closets out, they were useless, terrible closets. We took down the walls in between the rooms. My other apartment had so many rooms and doors and walls so I wanted something open.

I love that this is open, I love the high ceilings, I love the 19th-century details like the tin ceilings. I used to have that old kind of toilet with the oak box. It had a little leak and I told the super. I thought he could just glue it. He ripped it out and put in a regular toilet. I was heartbroken.

More than anything else I love the view. Notice how the chair is turned. I’m retired. I spend a lot of time sitting at this window. I love the view but not just the view — I love the activity that goes on. I’m not just watching leaves fall. 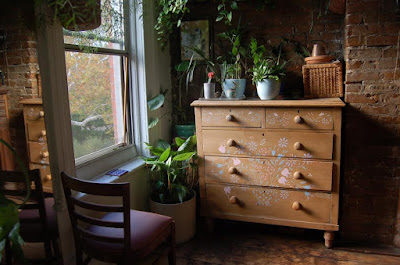 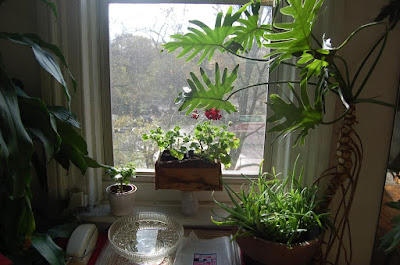 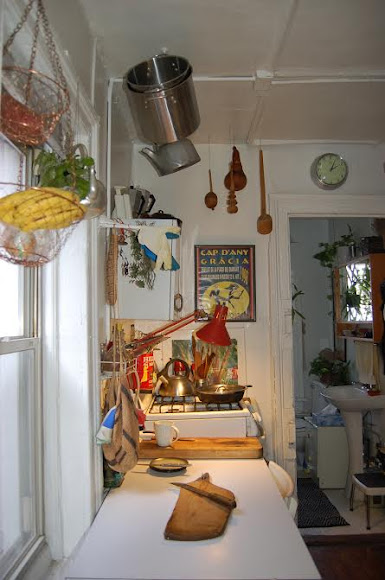 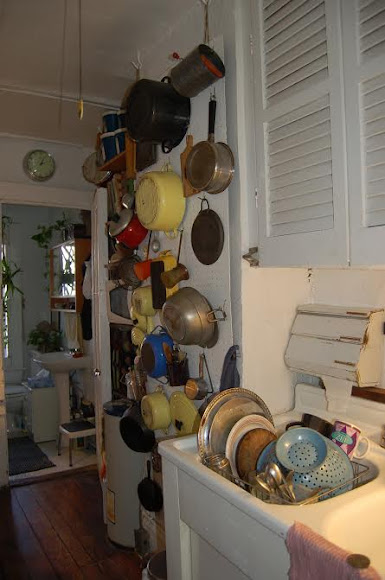 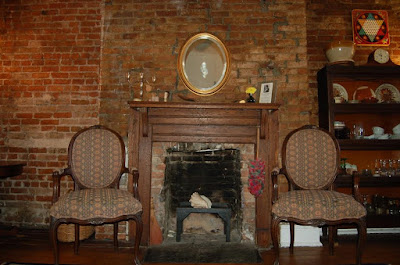 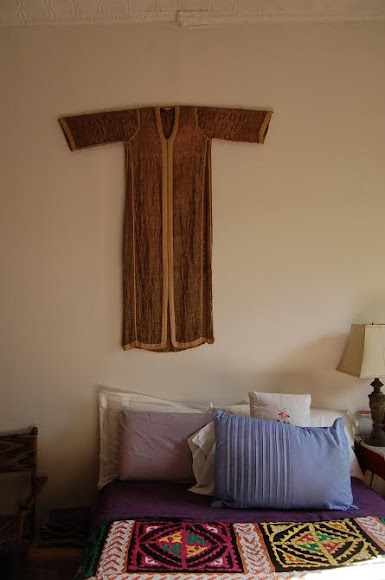 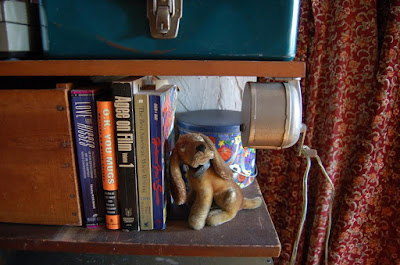 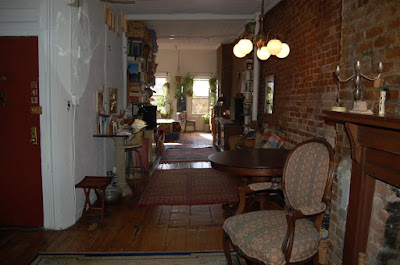 If you're interested in inviting Susan in to photograph your apartment for an upcoming post, then you may contact her via this email.
Posted by Grieve at 9:00 AM

!) What a great story, gorgeous apartment, and lovely view.
2) Oh my God, wide plank floors! What I wouldn't give!
3) This is why buildings should be owned by human beings, not corporate LLCs that are either totally anonymous, or fronted by thugs as their public faces.
4) If June had someone seal the brick walls by covering them with a matte varnish (high gloss makes bricks look totally cheesy), no more dust.

5) When this lovely woman is no longer occupying this equally lovely, warm and individualistic space, it will be taken down to the walls by whatever corporate entity owns the building now and rebuilt to look like every single other crappy cookie-cutter shoebox space being PT Barnum'd as the "height of elegance and luxury" in the EV today.

Wow! when I moved to the EV in 1981, Arthur Brown was my landlord too (different building I think). He had an account at Schames Paint on Essex Street and sent me there for paint and supplies. My rent was $212.75 and Arthur's approach was, "If you leave me alone, I'll leave you alone." He was nice to people, kept up our buildings and provided a cheap and safe place to live.
He sold my and the adjacent buildings in the mid-1980s and we were converted to a coop, but some neighbors stayed in touch with Arthur and his daughters. When he died years later, many of his former tenants went to the shiva. That's the kind of man he was. I'm happy to see his name and remember him on a blog that, of necessity, is usually addressing a different type of landlord and person.

What a beautifully decorated apartment.

wow, great story about finding this beautiful place! and great advice too! be intrepid! love the pix, love the plants, and very glad the tenant got the open spaces she was craving! thanks susan schiffman and grieve!

There were great landlords back in the day.

Ohhh, this place is just dreamy. I wish its occupant all good things. This is the real East Village as I once knew it ages and ages ago.

I lived all over in the EV from 1984 to 1994 .. 14th st down to rivington , and yes back then it was word of mouth that got you in , not newspaper ad or paying any scammer . I loved every place I lived in and the life that came with it ❤️ .most of the apts had the older EV Look nooks and crannies and lofts in bedrooms , so dreamy and fun . I’m now in Chelsea -18 yrs ) in a 20/80 . Because I’m older I’ll take the elevator newer building versus walk up . Still have a bike so the elevator helps a lot .

One could think while viewing Susan's wonderful photos that they were taken 25 years ago. I was struck by the absence in them - hence the apartments - of any device that could be used to read this post or view these photos. This reminded me of perusing The Voice, looking hopefully for an apartment, a non-"luxury rental" that I could afford. Thanks Susan and all you good folks.

Hi June, Your place is so photogenic! If you saw pics separately, you would think they are from different apartments, specially that set by the fireplace, like from the 19c.
When I arrived in NY in 1980, friends introduced me to people who subletted their 350 sf ground floor apartment on Sullivan St. off Houston. In the meantime I god all kinds of advice like "read the obituaries, you may get a rent controlled apartment for yourself". That did not work but I was able to take over the lease of this place where I spent 12 years of my life. For some reason I was on Internet, and found out that the building now belongs to Mr. T's son in law (you know who I mean). Could not believe the pictures! just like any upper east side renovated flat.
Lucky of those who are still enjoying these places. And lucky of those who can still remember!