The International Bar closing, merging with the Coal Yard on 1st Avenue 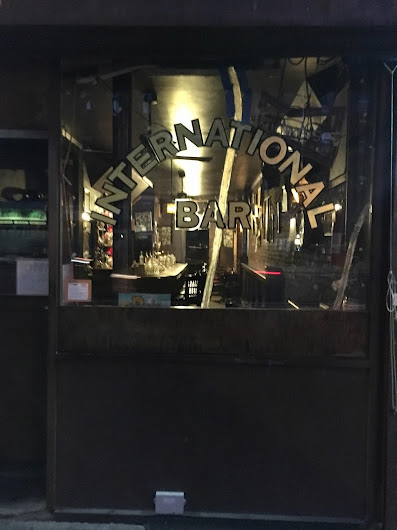 The latest iteration of the International Bar closes after service tomorrow night at 120 1/2 First Avenue. The bar will be merging with its sister saloon, the Coal Yard, one block to the south between Seventh Street and Sixth Street. The Coal Yard space will be rebranded as the International... and will be open on Thanksgiving. (This information comes from two bartenders and a handful of regulars.)

This move had been anticipated for some time as ownership knew that the landlord for No. 120 1/2, Steve Croman, wasn't going to renew the lease.

The International has had several lives since it first opened at 119 St. Mark's Place between Avenue A and First Avenue in the 1970s... owner Mary Petruno and her son Michael later moved the bar to No. 120 1/2 when she bought the building. 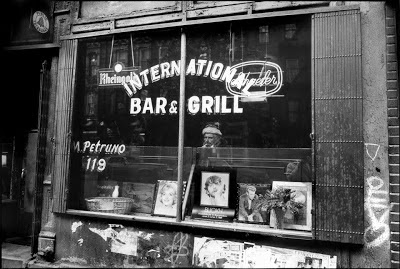 I'm a little hazy on details of when everything happened at No. 120 1/2, such as the bar moving from the north side of the space to the south side and back to the north side. (This post at Vanishing New York has some of the background.) The International closed in 2005 ... and the space sat empty until Shawn Dahl and Molly Fitch reopened the International in its current low-key neighborhood format in June 2008. 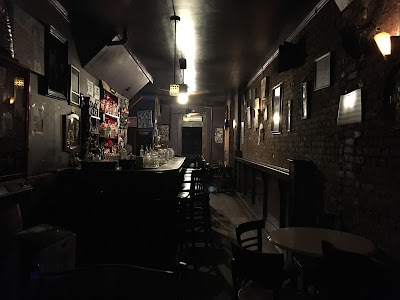 [The International the other morning]

Molly and Shawn opened the equally low-key Coal Yard in 2010. 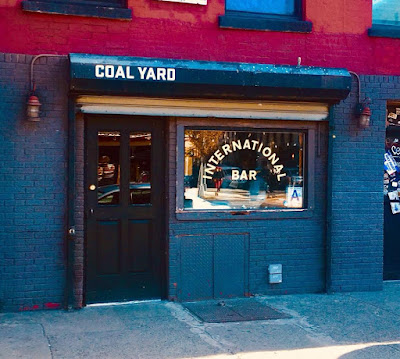 Thanks to EVG reader John M. for this screengrab... when Keith Richards walks by the International when it was on St. Mark's Place during the "Waiting on a Friend" video... 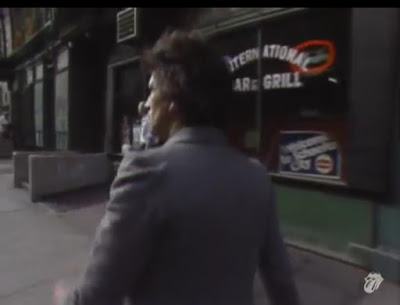 Email ThisBlogThis!Share to TwitterShare to FacebookShare to Pinterest
Labels: Coal Yard, the International

The International never looked better than the week after Sandy. Beers out of a cooler lit by candlelight. Many great hours spent there that week.

Try their Rikers Island Iced Tea, in honor of Steve Croman. I hear it’s a riot.

Great space, great owner, great staff, great patrons and so many great memories. Its closing will leave a big hole in whatever is still left of the old East Village.

I am just happy Coal yard will still exist. I will miss running back and forth between the two though all night.

No room for dive bars in the New New York.

Was just saying 'thank god this place is still around.' FML

Memories of not remembering....I shall miss you

I hope everyone comes over for the closing party tomorrow. I sure am going to be there and then not remember being there the next day.

I would love to go to the closing party, but I'm out of town for Thanksgiving :(

I use to take photos there in the late 80s and early 90s here you go https://davidseelig.photoshelter.com/gallery/International-Bar-late-80s-to-early-90s/G0000zE18rhUiSQ4/C0000cbePIuJTfZw

Fond memories of the coal yard when it was the homestead. What a unique cast of regulars! Including the Ukrainian gent who resembled Maurice Chevalier. He’d break into merry song once his blood alcohol level was just so. Or Matthew, the young heartsick Polish refugee who’d play “Lady in Red” on the jukebox over and over again.

"I'm a little hazy on details of when everything happened at No. 120 1/2, such as the bar moving from the north side of the space to the south side and back to the north side."

The original International Bar fixtures ( including the bar ) were all removed before the building was sold to Croman. The bar in the new International was a cut down piece of the old bar from the UES Racoon Lodge, which closed in '07. The partners wanted to put the bar in it's original location but it was decided installation on the north side would facilitate a little more ease of movement in that tight space. Originally there were three partners, including former Manitoba's partner and neighborhood musician Mark Suall. He pursued the lease for the space for three years before finally striking a deal with Croman and securing approval of the liquor license through the Community Board. But he fell out with Molly and Shawn and legally exited the partnership in 2009. Most important, a neighborhood institution was saved for a second and far more successful life. The original International never drew well and survived only because the owner also owned the building. In this day and age calling a spot like the International a "dive bar" has a touch of bitter irony. It is the loss of such institutions to the interests of the monied class that's degrading our city's once great culture. The International is another victim and it can't be replaced.