7 years later, a Ben & Jerry's is returning to the East Village 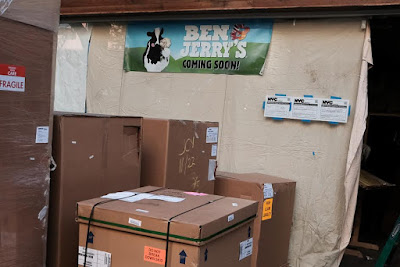 Back on Friday, we noted that the former Caffe Bene space was under renovation at 24 St. Mark's Place between Second Avenue and Third Avenue.

And yesterday, EVG contributor Derek Berg spotted the coming soon signage for the next tenant — Ben & Jerry's. (H/T to Bayou, who noted in the comments on last Friday's post that a Ben & Jerry's was coming to the block. The former DF Mavens space was also a contender.)

There was a Ben & Jerry's outpost at 41 Third Ave. between Ninth Street and 10th Street for 22 years before its closure in September 2010. 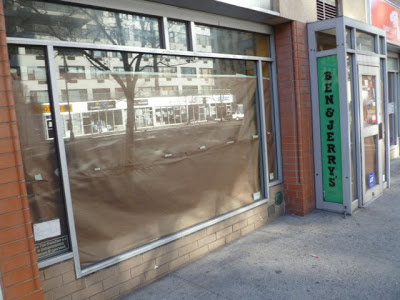 No word on the opening date just yet on St. Mark's Place.

Caffe Bene closed back in April after 17 months in business. Before Caffe B, the address was a Pinkberry.
Posted by Grieve at 4:03 AM

Yet another ice cream place but at least it's the OG haha.

No surprise more ice cream but this time a big corporation is having a go.

Yay! America's ethical capitalists. I love Ben & Jerry's. I love all the haters. You guys make me feel so positive and happy with my life. Kudos!

If I'm not mistaken the original Ben & Jerry's in the EV was on the east side of 2nd Ave between 9th & 10th. It didn't last too long. It might have been in the old Orchidia restaurant where Starbucks is now. Let me know.

We have more tourists now flooding our streets, now they can add B&J's to places to go after the Death Star Shack Shack.

When they opened on Haight Street they gave out cones for a quarter. The line wrapped around the block for the entire day. I felt bad for the staff.

I heartily welcome Ben & Jerry's back to the neighborhood for many reasons, but esp. b/c they understand how to get people to form ONE LINE for service, as opposed to Sundaes & Cones which I avoid b/c it's a total free-for-all trying to get served there.

I've tried to find out several times WHY Sundaes & Cones has such a problem understanding that ONE line would be better for everyone, but the owners/operators do not seem to comprehend this concept, even though it's long since been proven that one line gets *everyone* served faster.

I hope this Ben & Jerry's is better run than the outlet that used to be in Chelsea. As an ice-cream lover, I was always disappointed there...it was a dirty place, total joke of a business. So it closed!

I can't wait for Ben & Jerry's to open! I have had nothing but great service at the Ben & Jerry's in Vermont, plus they always give back to the community. They're a business with a social mission, that's pretty amazing.