A new generation for 'Blank Generation' 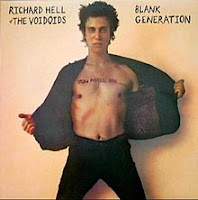 In honor of the Black Friday edition of Record Store Day, Richard Hell and the Voidoids’ "Blank Generation" received the reissue treatment on the occasion of its 40th anniversary.

The Village Voice has a piece on the reissue, and Hell's initial reluctance to take part:

He’d already mined his memories and exorcised his demons from the period in his colorful autobiography, "I Dreamed I Was a Very Clean Tramp," and he wasn’t exactly eager to resurface those emotions.

On top of that, as Hell admits, he’s scrupulous and a control freak. “I knew it was going to be really demanding, because whether or not I thought that it was meaningful or justifiable — as opposed to being a marketing idea — it was going to take a lot of attention from me,” he says. “And it did. I oversaw every aspect of it, but as it went along, I got more engaged and now I’m feeling really satisfied and fulfilled.”

Hell, a longtime East Village resident, signed copies yesterday at Generation Records on Thompson Street. He'll do the same this afternoon (starting at 2) out at Rough Trade in Williamsburg.

Back to the Voice:

Working on the reissue of "Blank Generation" certainly evoked the time and place, mainly the essence of the Lower East Side in 1976, but it was as if he was observing moments rather than reliving them. For Hell, it’s another world entirely.

“It’s really like you’re looking at another person, but you know at the same time that it’s actually you,” Hell says. “You can feel a kind of affection or horror at this person that you once were, but it’s only personal in a very uncanny, eerie way. It’s not like a direct nostalgia because you were somebody else at that time. There is this sense of fondness — it’s almost a pattern for some previous self.”

Congratulations to our dear neighbor Richard!