In 2002, the Father’s Heart Ministries launched Alphabet Scoop adjacent to the church on 11th Street between Avenue A and Avenue B.

The seasonal ice cream shop hires and trains at-risk teens from the neighborhood ... and provides them with mentoring.

A group of volunteers are now working to give Alphabet Scoop "a boost that it needs." A crowdfunding campaign is underway, with a goal of raising $70,000 by the end of the year. (They've already reached the halfway point.)

The volunteers include an architect, a contractor, a financial analyst, a lawyer and project managers. They want to redesign and renovate the space and help with business operations and financial management.

Per their campaign info:

Alphabet Scoop has yet to be profitable and has relied on the financial support of the Father's Heart Ministries to keep the lights on.

The mission is incredible but there are three main problems:
• The business is undercapitalized and the store has not been properly maintained or renovated in over a decade.
• An undifferentiated brand limits awareness and the ability to reach a wider audience.
• The lack of systems has led to operational inefficiencies.

They are hoping for an April 2018 Alphabet Scoop relaunch.

You can find more about the campaign here. 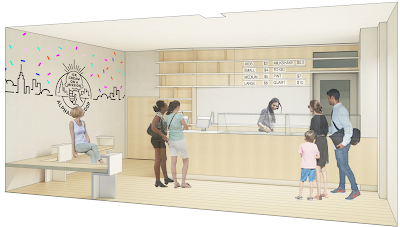 They might also think about some kind of ad campaign to raise awareness of their presence. This is not a very heavily traveled block, and theirs is the only storefront on the entire north side.

I agree with Gojira, brand and mission awareness in the nabe will help.

Reduce the price for the pint to $5 and I'll be your customer again.

I truly hope they are successful. However, they are a little late to the party. A few years back they were the one ice cream shop in the area. Now there is Mikey's , eggloo, gelarto to compete with... all basically selling the same thing. And the winter will be hard on everyone. Hopefully the will price their product well to gain an edge

The Father's Heart is a wonderful community resource and deserves support for everything that they do, including the ice cream store- perhaps the product could use a little more variation though- as an ice cream lover who has had many cones there, it could be a little richer. But Dulce de leche is a winner!