BarBacon looking at expanding to Avenue A 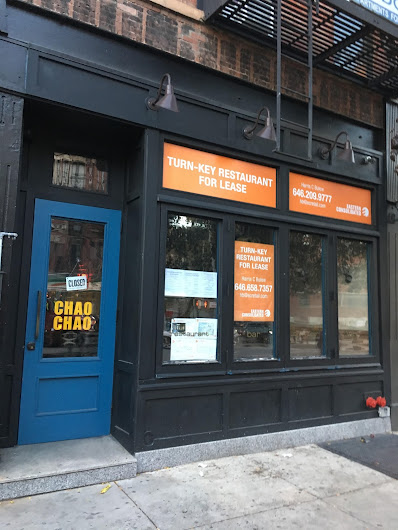 The proprietors of BarBacon are getting a head start on CB3's SLA committee meeting for December... paperwork is up in the front window at 171 Avenue A between 10th Street and 11th Street... 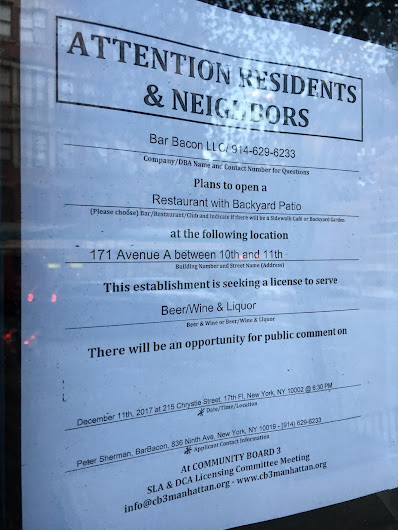 In case you don't dine on swine, here's more about BarBacon, which has an outpost on Ninth Avenue in Hell's Kitchen: "Bacon flights & other swine-spiked grub served in a gastropub setting with a large bar." (Read more about the place here.)

The meeting notices and applications aren't live just yet at the CB3 website. However, the paperwork on the door shows that the owners plan to use the hotly contested backyard patio.

The previous tenants here, both Chao Chao and Soothsayer, as well as B.A.D. Burger, were unable to secure a full-liquor license or back-patio usage.

CB3 had this to say in denying Soothsayer's full-liquor request:

See the comments for an update from CB3 District Manager Susan Stetzer. The meeting location has NOT been confirmed for December.

Email ThisBlogThis!Share to TwitterShare to FacebookShare to Pinterest
Labels: 171 Avenue A, Bar Bacon

Sweet, another temporary place for people that don’t live here... and a disgusting one at that... the 9th ave location gets times square tourist spillover.. this wont make it a year.

Sorry restaurant and or bar owners, the space behind our buildings are sometime the only bumper we have against all the noise from the streets. Anyone with a bedroom in the rear of a building will tell you sound echos between the building like in a canyon so that last thing we need is music, loud voices when we our children are trying to sleep. I really hope CB3 says NO.

Bacon and booze- just what Ave A has been missing. The bar is huge- guess where the focus will be.

please note information on sign is incorrect. This applicant was notified by the community board in answer to his query about the meeting that he would receive information for the meeting when the location was confirmed.

Remember, the mayor claimed a mandate. These invasive and disrupting bars and restaurants are part of it. Just think how worse it will be now that the cabaret law is lifted.

Oh but don't you selfish people understand, if this place doesn't get to use the backyard garden, they WON'T BE ABLE TO MAKE A PROFIT! Hardship claim! Bring jobs to the neighborhood! Positive asset! Waaaaahhhhhh!

If the applicants plans aren't offensive enough, they have already shown their true colors by posting the wrong location for the CB 3 meeting.

I hope they serve bacon noodles.

A bacon-themed bar/pub is a superbrotastic idea.

Is that vodka-infused bacon or bacon-infused vodka?

@ 8:47 am. Please attend the meeting to oppose as should everyone else who thinks this is gonna be a problem. CB 3 will listen to residents if they show up and make their voices heard.

I can't imagine a more offensive proposal than this. There isn't one good aspect to this proposal.

i would love a place that caters to bacon
and hope i they will not force me to forego the pleasure of bacon in all it's glorious saltiness
but you can't disregard that this is also a residential community and people need their sleep
backyards should be totally off limits to bars and restaurants
this neighborhood is already a college playground where drinking is a favorite sport - let's not expand into more back yards.

Maybe it's a farm to able concept that's why they need the backyard. Talk about bringing home the bacon.

If you're lucky they'll open a 5 am catering business like we're now seeing on 6t Street in restaurant row...the noise and filth runs 24 hours - the East Village has been reindustrialized. THANKS ROSIE!