The rent is due at Dojo Noodle House 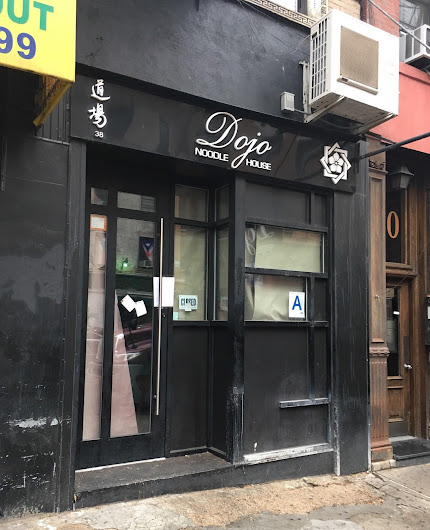 Dojo Noodle House has been closed since mid-August here on Avenue B near Third Street. At the time, a sign on the door noted a September return. That never happened.

This past week, the landlord taped some legal documents to the front door for ownership ... with the notice that the restaurant owes some recent base rent and an assortment of legal fees that add up to $18,903.32 ... The small restaurant opened as Dojo Izakaya in November 2014 and received positive notices. This Dojo was an offshoot of chef David Bouhadana's Sushi Dojo on First Avenue between Sixth Street and Seventh Street. (Bouhadana reportedly parted ways with the Dojo camp the following year.)
Posted by Grieve at 4:00 AM

Email ThisBlogThis!Share to TwitterShare to FacebookShare to Pinterest
Labels: Dojo, Dojo Izakaya, restaurants that may possibly be closed now

I wish the Egyptian falafel place that was here could have stayed. It was delicious, friendly, cheap and popular.

That sushi dojo on first avenue is a horrible place. Tried to get a table with a friend who was dressed nicely from work as was I. The looked horrified and said there were no tables. I said I see about 12 tables free. He said no you can't get seated. When we saw the clientele in there wearing business suits we were glad they hated us for how we looked. I hope they go out of business soon. I did remind the guy they are next to mcdonalds and subway. What a clash of cultures there