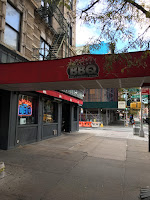 The Post has a feature today on Anette Sørensen, the Danish woman who made front-page news 20-plus years ago after being arrested for leaving her baby in a stroller while dining at Dallas BBQ

She said that she was treated unfairly by the city and the media, and never had the chance to tell her side of the story.

Sørensen, and the baby's father, a playwright named Exavier Wardlaw, reportedly stopped for dinner at Dallas BBQ on Second Avenue and St. Mark's Place in May 1997. She left her daughter Liv, 14 months old at the time, outside sleeping in her stroller.

I had lived in New York [during school], so, of course, I knew that I didn’t see prams all over the city," said Sørensen. "But ... I had been living in Copenhagen, I had given birth to my daughter in Copenhagen, I was raised myself in Denmark ... That’s just how you do it in Denmark."

Someone called 911 about the child. Sørensen said at the time that she and Wardlaw were keeping an eye on the child.

Officers charged both parents with child endangerment and Wardlaw with disorderly conduct.

Sørensen spent 36 hours in prison, where she said she didn’t get much sympathy from the other inmates. Liv was put in foster care by the city’s Administration for Children’s Services. The case made the front page of the Post.

“I didn’t know where my child was,” said Sørensen. “I don’t think there’s any greater punishment than to have your child taken away from you.”

Per the Daily Mail:

She was awarded $66,400 by a civil jury, which found only that she should not have been strip-searched and that the city commonly failed to advise arrested foreigners of their right to notify their consulates.

In 2012, she used the experience as a basis for a novel published in Denmark. Now she has launched a crowdfunding campaign to get it translated into English. Liv, the 14 month old at the center of this story, created the graphic design for the book's cover. She's 21 now.
Posted by Grieve at 9:28 AM

Sorry lady, but Denmark is not NYC..

As an New Yorker who has spent my vacations the past 30 years in Sweden I can tell you that parents often do this even in winter. The child is always completely warm under blankets and sheep skins and the child gets fresh air. I was surprised seeing this for the first time but these were my friends and relatives doing this not crazy people. Small children also play outside in the winter regardless of the tempt.

And if her child had been kidnapped we would have had a multi million all hands alert trying to find her infant. Finally a cop did his job and went above and beyond

I remember this story. I also knew at the time that no matter how they did things in Europe, NY 1997 was not the place to leave a baby on the other side of a window while you ate dinner. Had no sympathy for this idiot then, have none now. But I can't believe it's been 2 decades!

Yet parents are free to go to any bar in New York, get drunk, then go home and abuse their kids as much as they want, because in this country we value freedom.

it was once safe to leave your child and/or your dog outside a store while you ran in to buy something.
you could also take your pet into most restaurants as long as it was small enough to sit under the table at your feet and did not cause a disturbance.
in the late 60s union square park opened a monitored play area with staff for the children of shoppers.
rents were low, lines were short and people were mostly polite.

Her biggest crime was eating at dallas bbq

There is no excuse for her behavior. And the fact that she carries on about it is disgusting. SHUT UP! GO AWAY!

Right, long ago people did that in Europe, but have stopped also long ago since there were many kidnappings.
She was in a different country, not her native Denmark, so really, there goes that defense.
If she watched the stroller the whole time, how did she look down to eat ?

Wow 20years ago! I remember vividly. And, remember it was New York New York NOT Denmark!

This story has been spread around on many media outlets (it is on the Guardian's US page). It's not so expensive to self-publish. I guess after 20 years a little self-aggrandizement is needed to make your life seem worth-while (after you've spent the $66,000). One can rationalize as much as one likes about what is done in Denmark, Sweden, or elsewhere. Lots of people have commented on how this is a "normal" practice. Perhaps it was then, I doubt that it is now. Andy W. said 20 minutes of fame--this woman wants to come back after 20 years and what?? cash in on a stupid act by justifying it or becoming the new parenting consultant on NY One? She should fade away for another 20 years.

The crowdfunding statement about why this novel, written in Danish, should be translated into English raises issues of trust vs fear and child rearing. Sorry lady--if you are still seeking to justify the potential danger you put your child in by leaving her outside a restaurant (as well covered as she might have been) you need to take a deep look at reality. If in Denmark such things are still done, good for them. I doubt that you will find much support for what you did in any German city today. Such some parents lock their children in cars while they go inside a mall or engage in other activities. We in the USA recognize child abuse when we see it.

"Something is rotten in the state of Denmark".

I grew up in Cleveland in the late 1950s. My mom, a single parent, left me in the car for a few hours at a time while she met her girlfriends for drinks. That sounds bad, but there are other things that she did that were far worse.

Great to see how open minded some people in the EV are these days. Perhaps someone entering the restaurant or passing by could have tried to see who's child it was instead of calling the police. I often see tourists doing stuff that is not considered the "norm" here, better to address them than call the police.

Reading this post and going to the links (including the video on the Crowdfunding site), I understand that Ms. Sorensen needs to find some justification for what happened to her. I am pretty sure that you can self publish a novel for much less than $26,000 which is what she is asking for. She also seems to know English as does her daughter. New York City changed profoundly after the kidnapping of Etan Patz (1979). People with children were far more guarded after that moment. If Ms. Sorensen went to school here she must have be aware of how that kidnapping shaped people's concern for their children. I am proud of the people that called the police that day--they showed civic concern. Of course, Ms. Sorensen's treatment by the police (being strip searched) was an unnecessary step. From the photos on the crowdfunding video, it is clear that she was not deprived of counsel.