Report of a death outside the Orpheum Theatre 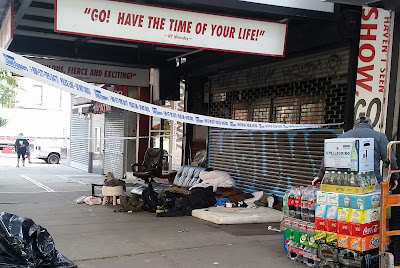 We received multiple reader reports this morning that a man was found dead outside the Orpheum Theatre on Second Avenue between Seventh Street and St. Mark's Place.
There was a large police presence here this morning around 8 (photo below by Derek Berg) ... 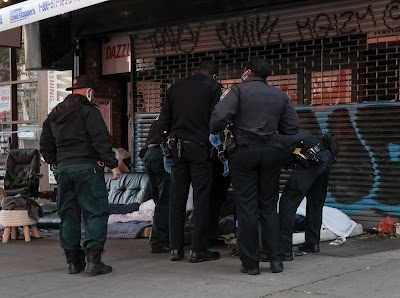 Sources later confirmed that one of the men who had been sleeping on the sidewalk had died. A friend said that the man had been sick, though he had refused to seek medical treatment.
People have been sleeping here in recent weeks... the group had previously been camped out on the northwest corner of Second Avenue at Seventh Street.
Thank you to Steven ... and 2ndAvenueSilverPanther for the top photo
Posted by Grieve at 4:19 PM

This makes me so sad. Thank you for reporting this.

Sad... walked past this on my way to vote and figured it was another fight among themselves or against another.
I know it's not popular opinion but people should not be allowed to live on the streets like this with mounds of their own personal garbage.
Hate the idea of forcing them into shelters which need to be reformed themselves, but with weather temps dropping it should be mandatory

has anyone seen Razor, homeless trans man with a big mohawk in all black? really worried about him

One of the people who camps there seems to have a raspy voice reminiscent of Wolfman Jack and a penchant for vocal projection, but it's so raspy that it's hard to understand what he's saying. Anybody know what his story is?

I saw a similar scene yesterday at 11am at University just off the NE corner of Washington Square park. Maybe that first cold night was too much for some unfortunate souls.

@Sim City Mayor I live next door to where the guy passed away, and have been treated to those vocal stylings quite often. He's really loud and can "sing" for hours on end. I've recorded him from my window, and a friend described his sound as "Popeye on heroin". I call him Frog Sinatra. It's entertaining once in a while - not so much incessantly, or at 3:00 am.

Razor...that's a blast from the past. I haven't seen him in about ten years. Has he been around? He's a person I've thought of and worried about often over the last several years. I hope he's ok.

There was no fight the guy was sick and didn't go to the hospital.

Another sudden death connected with helping homeless people in a big way for years. Pastor Diane Dunne died in her sleep and fed thousands of meals to Tompkins Square Park poor people.