This 2nd Avenue building comes back into full view 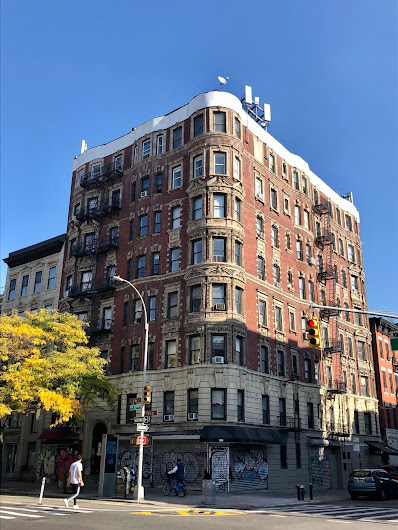 The sidewalk bridge was removed the other day from outside 104 Second Ave. at Sixth Street... ending a nearly three-year run (as seen in Google Street View).
One building resident said that no work was actually done during this time. The Department of Buildings had issued several permits in recent years, including for "removal/replacement of defective brickwork, limestone and terra cotta segments."
The two restaurants in the retails spaces have also moved on, most recently Jiang Diner after six whole weeks ... and, in the corner space, Madame Vo BBQ, which seems to have permanently merged with its sister restaurant on 10th Street.
Anyway, nice to see the building again. (And bring back Bamboo House!)
As for sidewalk bridges, I'd say the one outside 19-23 St. Mark's Place has the current record with more than five years maybe? (In emeritus status: the sidewalk bridge around the long-empty P.S. 64 on Ninth and 10th streets.)
Posted by Grieve at 5:00 AM

The skinny building on 3rd Av between 14 and 15 streets, Broadway between Astor Pl and Waverley Pl (across from the wine shop)

Any update on all the scaffolding around Village View? I don't think I've seen any actual work going on there.

So happy this scaffolding is gone.

How about the scaffolding outside the Police Athletic League building on south side of 12th St. just east of University Place?

Now, I don't get out a lot due to the pandemic, so maybe it's been removed in the interim, but last time I went past there it was in place. It feels like that's been there for decades with no evident progress made or word completed.

Re: Village View. I live there. The scaffolding is up as protection b/c we had some Local Law 11 issues (facade conditions that need attention). We're still bidding for the work to be done. Long, slow process. It will be up as long as we have a violation, and then during repairs. So, for 'years' more.

DOB needs to hold landlords to an expiration date on their scaffolding permits. Right now, DOB just gives them out like candy, usually 1 year at a time, and will renew for any reason, so landlords aren't really motivated to do work. Landlords should be fined if the work is not completed in a reasonable amount of time. Scaffolding is a quality of life issue for tenants. DOB is so landlord-friendly, I can't imagine them doing this on their own. Maybe a friendly pol might propose a law to compel the DOB to set limits on permits (?)

Live in VV, they put it up because they had some falling debris from the balconies, they were all suppose to be inspected and whatnot but no clue what the hold up is, As far as I know it was never a construction project.