A Thanksgiving without Odessa 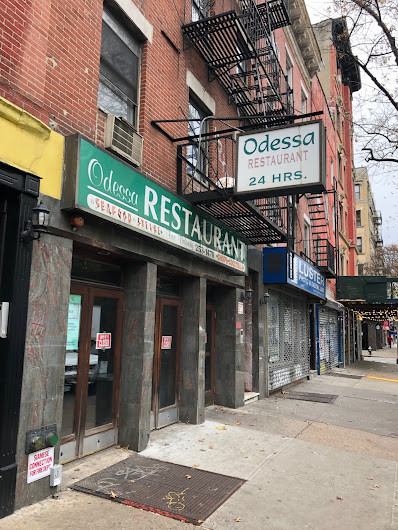 This is the first time in nearly 13 years of EVG history where we haven't hyped up the Thanksgiving special at Odessa five or 10 times by this date in November. (Please see the link farm at the end of the post.)
As you know, the diner, dating to the mid-1960s here on Avenue A between Seventh Street and St. Mark's Place, closed in July. Longtime manager Dennis Vassilatos said that Odessa was shutting down after a prolonged slump in business due to COVID-19.
Closer to the last day, however, co-owner Steve Helios told Gothamist that Odessa was only closing temporarily, that the space would be renovated. (The building's landlord is Odessa partner Mike Skulikidis.)
To date, four months later, no work has been done on the space... here's a look inside this week... 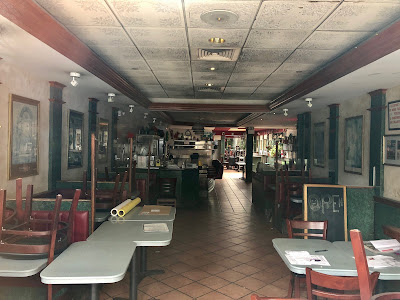 As for Thanksgiving... through the years they stuck with a winning offering — glass of wine, cup of cream of turkey soup, etc. And pricing — and signage! — for the Complete Dinner remained unchanged since 2014, when management bumped the meal from $15.95 to $18.95. 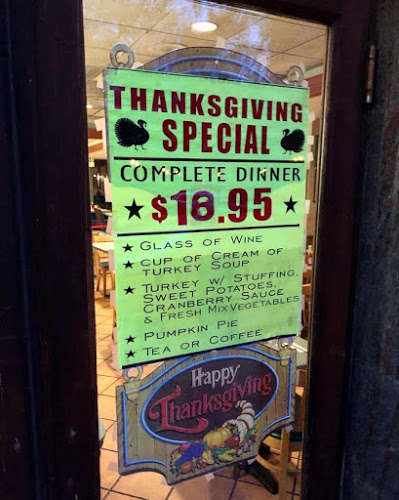 For me, it was the place I'd always go after a goth/punk show, or a rave. Gasmasks, fishnet stockings, and spiked collars, we were always welcomed at Odessa, even if we were a bunch of weirdos rolling in at 5AM.

I very much miss it.

Breaded chicken cutlet, mashed with brown gravy on the side, corn, and 2 slices of hallah with butter. Everything else was nonsense.

I used to say to myself, if Odessa ever closes, I’m outta NY (or at least the East Village). :(

I'm sooo freaking sad. His just may push me past what I can handle for covid

Odessa is an actual place in Russia and yet the diner must be Greek owned like many remaining diners left in the city after seeing somewhere on evegrieve that the owner is returning to Greece for retirement.

We have a few of them North of New York City including one that is owned by Hispanics in the countryside with a menu that is taken out from one these places most likely from NYC. I see the menu with "Greek Specialties" such as Spanokopita and Baklava. Sound familiar? Culture flows everywhere...

I worry about all the Thanksgiving at Odessa regulars and hope that they will enjoy today in a new way.

Odessa is not in Russia. Tell that to a Ukranian who lives in our neighborhood and see what they say..