[Updated] This is the last week for Odessa on Avenue A 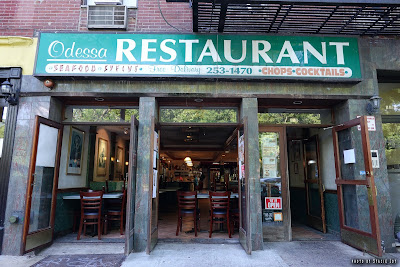 Updated 7/17
Gothamist now reports that the owners will just be closing for renovations. Longtime manager Dennis Vassilatos told Stacie Joy last Sunday that they were closing for good, not remodeling. Gothamist also got confirmation of the closure on Sunday.

This is the last week for Odessa Restaurant, 119 Avenue A between Seventh Street and St. Mark's Place.

EVG correspondent Stacie Joy spoke yesterday with longtime manager Dennis Vassilatos, who started at the diner in 1990 when it was next door. He confirmed that Odessa was closing after service on Sunday, July 19. 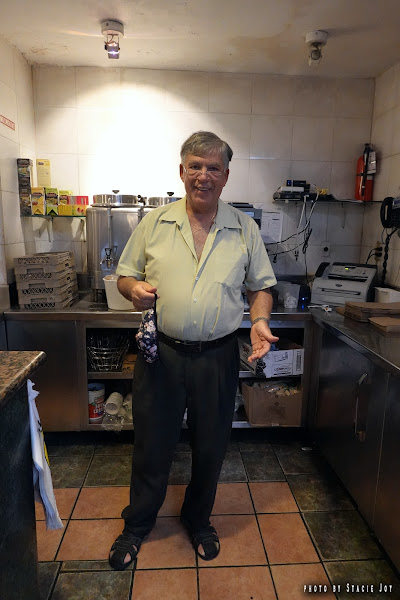 He says that Odessa is shutting down solely due to the significant loss of business during the COVID-19 crisis. (Odessa reopened for takeout and delivery in early April.)

Mike Skulikidis has been an Odessa co-owner since 1980 (along with Steve Helios). Skulikidis is also the landlord of the building, so there isn't an issue with a rent increase. And about the rumors that Odessa would be closed for remodeling: The place is shutting down for good, not reopening.

Vassilatos had been planning to retire to his native Greece in the months ahead... now he says he'll be doing it sooner than anticipated. While he's not a fan of long goodbyes, he knows that regulars are going to be understandably upset by the closing news.

As one reader said to us yesterday: "Odessa was supposed to be there forever."

Here are a few scenes from yesterday... 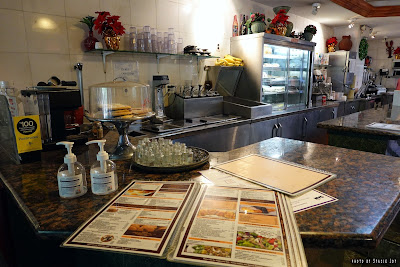 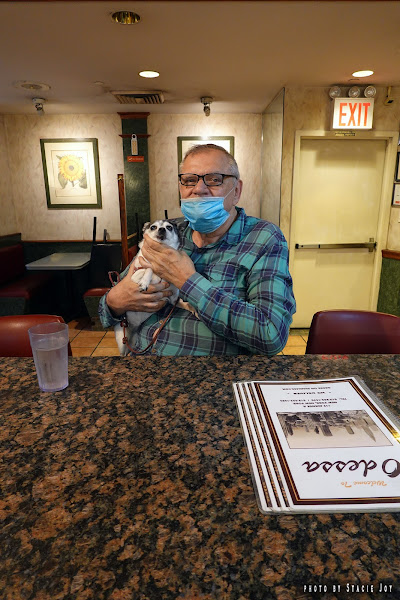 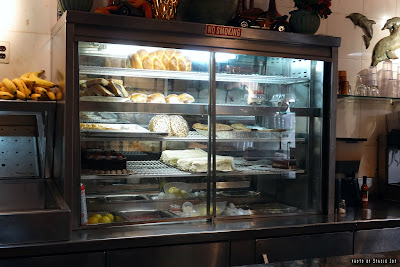 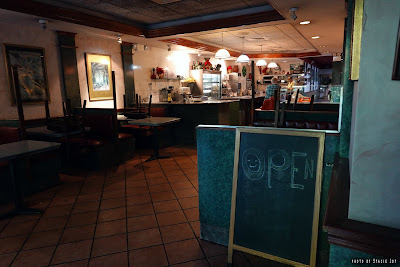 Odessa Restaurant opened in this space in April 1995. The original Odessa, which dated to the mid-1960s, closed next door in August 2013

Anyone know what is happening with Little Poland restaurant on 2nd ave between 12th and 13th street? They have been closed since the beginning of the pandemic shutdown and have not opened since. Nothing is posted on their doors?

This is a big blow. I wish them all well.

Willie didn't say a word when I bought breakfast yesterday.

Hate to see the demise of the diner. That makes zero left in the neighborhood. Got to go to 2nd Ave to find. What a loss. It's what made NYC what it is- make that was.

TRAGEDY! i have had so many wonderful times and delicious meals here over the years; the staff are always kind to everyone and never hustle you out, and the clientele was always a fantastic mix at all hours. i will sorely miss it! thank you odessa for so many glowing years! wishing all staff happy times and best luck in future.

My heart is shattered. While I always preferred the other (darker, smaller, older) Odessa, this was the last of the Avenue A troika of Leshko's and Odessa Squared that had managed to hang on, but now it is going. Just devastating to me, to so many others, to Avenue a, to the neighborhood.

This is sad and there's gonna be a lot more places that end up like this due to poor support from the city and state governments. Really can't blame Vassilatos for getting the hell out of this country as soon as possible.

The Stage, Polonia, Odessa - my three favorite breakfast/lunch spots, all gone. I went to Odessa regularly for the egg breakfast and to relax and read my book. Saturday nights were spent on the "dark" side for dinner and drinks. The staff were like family and it breaks my hear to see it all go.

I am going to miss this place so much. I see other restaurants in the neighborhood seem to be serving a good number of diners outdoors. I hope this will get them through to when they can fully reopen. But I worry it won't.

I have eaten there for 40 years of good food. Thank you and we are sorry to see you go.

Wow. So many memories here.

I started eating there when I first moved to the EV in 1968 and had breakfast at Odessa every Sunday with the then boyfriend. Many many takeouts and eat-ins since. It will be missed...

I actually broke up with a narcissistic boyfriend here during the summer of 2014 on a muggy August weekday morning. We exchanged cutting words and some regret perhaps to another while hung over while only a few guests were scattered about. I was embarrassed for looking like shit and for being emotional as I cried, but we were left alone by the professional staff. We had found this place because our friends apartment was just around the corner where we crashed on his couch following a night of partying. The food here was delicious. I drowned myself in coffee, hash browns and a omelette with tabasco. I feel sad for everyone connected to this place who gave it such charm and warmth. It carried many memories and is a welcome departure from fancy, overpriced destinations with pretentious waitstaff. Had it not been for that morning and this very restaurant, I wouldn't have had the courage to rid myself of a toxic relationship. Odessa is what makes the EV unique. What neighborhoods should be anyways. Memories are really all we have now since several NYC institutions are forever gone. My best to the staff, owners and loyal customers who must now search for a new spot. Bye Odessa :(

Odessa has the best schnitzel (breaded chicken cutlet) in the neighborhood, my first meal in the EV 23 years ago, and the only thing I ever ordered there. Dennis knows...

Willie! I remember when he first started working there. He only asked for my order one time on all these years and still remembers it!

Odessa was the reason I moved to NYC, after meeting my boyfriend there in 2007. That ended but my life in NYC continues. Thanks Odessa!

Cafe Pick Me Up. Stage. Gem Spa. Neptune. Haveli. Now Odessa. So many of our favorite neighborhood living rooms are disappearing, but the diners are irreplaceable. These are the places that would feed you late at night and on holidays when everyone else was closed. The diners were the places that would keep filling up your coffee cup and never try to rush you out the door.

It’s hard to believe that it’s been about six years since we lost De Robertis, and 12 years since Christines closed down. It seems like they were here yesterday, because the memories of all the good times are still fresh in my mind. The same will be true if Odessa and of so many more to come.

I fear we will be losing many more places soon. I just heard yesterday that StuyTown now has about 900 more empty apartments due to sudden move outs, which is just under 10% of their total apartments but probably closer to 15 -20% of the total population with all the roommates and room divider situations.

Yeah the women tear their blouses off
And the men they dance on the polka-dots
And it's partner found, it's partner lost
And it's hell to pay when the fiddler stops
It's closing time

I loved you when our love was blessed
I love you now there's nothing left
But.....closing time

so upset and in disbelief over this. get Odessa multiple times a week, and was sure they would come out the other side. I'm gutted, feel this is the worst closure of corona. would it help to start a go fund me? I don't have much but I would donate and circulate

I am very happy to see that these guys are now going to return to Greece for retirement. They were open during riots and everything you can think of including the first Wigstock and Howl and so much more. Thanks to the whole crew they were kind and very nice to me for so many years. I was stationed on Crete for two and a half years when I was in the Navy and we often talked about the Greek Islands and Greek politics over the years. Good luck to all of them.

I am heartbroken, and will miss Willie and Irene and the rest of the wonderful staff. I hope they all find new jobs during this tremendously difficult time...

I agree with John at 5:24. Those men should leave this hellhole we are now living in and retire to Greece. If I could leave NYC, I would.

Oh no, oh no, oh no!!! I am so bummed. This was our neighborhood place where everyone could get a good hot meal. Thank you for so many good breakfasts through SO many chapters of life. You will be sorely missed and wish it wasn't so...

Yes. The only blessing is the owner will retire and enjoy life finally. Running a restaurant is never easy. You got to love the game to play it and he was a nurturing man. Now let him go and return to his homeland.

I wasn't the biggest fan of the food personally, but you know a neighborhood institution when you see one. This hurts.

This one hurts. So many memories of meals with friends when I was a broke student, after a night clubbing, and post late night gigs. Thanks for the memories, Odessa.

I am very happy to hear that they are moving to Greece than being in this messed up country. I wish them the best. Now all we have left in this neighborhood are crusties under the scaffolds.

Such sad news.... This was my go-to place for late breakfasts, meeting friends when I regularly visited home. Peaceful, simple sustenance, relaxing. Nice friendly staff. Difficult to take all the loss that's going on. Just too much.

As others have said, deepest thanks from generations of Jackie Factory and other EV club lights, performers, artists and HOWL collaborators. Thanks for being a HQ for some of the most vibrant catalytic scenes and scenesters in the EV for three decades.

To the owners, we completely understand why you don't want to remain open, and you don't owe us any more than you have given already. Enjoy your well-earned retirement.

This is where I learned to order a “whisky” down - Toasted Rye Bread with butter . I also loved there ordering system with a mic that was piped in to the kitchen and the chef was only like one foot away from the mic That cadence and sound reminded me of the Beastie Boys.

I'm too depressed about this to even comment on it.

I hardly went here, but my late roommate was a regular and all the waitresses loved him. I do miss these relaxed eateries when they disappear, because they won't be replaced in this economy.

This is so sad. Willy has been seating and serving me and my family, his “number 1 customers”, for over a decade. He always knew our order and we always got the same thing. Thanks for the memories Odessa!

Now Gothamist is reporting Odessa is not actually closing...???

I know right? They played my feelings...and I risked taking the subway just to get my last pierogis from them ;(

This is like a death in the family. What a shame.

Willie was one of a kind. What happened to Willie after Odessa closed? He had been there for years!

Willie was one of a kind! Is Willie still in the area?