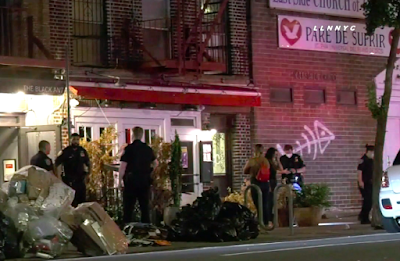 ABC 7 is reporting that an intoxicated man slashed two diners who were trying to help restaurant workers last night on Second Avenue.

The incident was said to happen before midnight at Dia on Second Avenue between Third Street and Fourth Street. [Updated: The location changed to Black Ant, right next door to Dia.]

According to witnesses, the incident started when an intoxicated man approached restaurant workers and demanded to be served.

The workers refused to serve him a drink, which angered the man, and that's when the couple attempted to defuse the tense situation.

The man was slashed in the back and the woman in the arm.

The couple, said to be in their 20s, were treated and released from Bellevue. The NYPD has not released a description of the suspect.

A lot more details about what happened have emerged throughout the day.

The location of the slashing has changed to Black Ant next door. The Post had six reporters on the story:

The mayhem erupted at around 11:30 p.m. at The Black Ant on Second Avenue, where a man, who appeared intoxicated, tried to get a table at the cozy eatery. He was rebuffed because the restaurant was about to close — sending him into a dyspeptic tailspin, multiple sources and bystanders said.

The drunk wouldn’t leave the restaurant, and instead began fighting with a male diner, who picked up a chair and began swinging it — and soon, more than a dozen employees and onlookers joined in the al-fresco free-for-all.

That's when Spencer Grammer, 36, and her friend Jan Phillip Mueller, 31, who were not originally involved in the argument, tried to diffuse the situation.

Per the Post, the suspect was "described as buff, bald and wearing a white shirt, and who may have had a female companion — had already fled on Third Street. Cops don’t believe the attacker was homeless, sources said."

The NYPD released this image of the suspect... 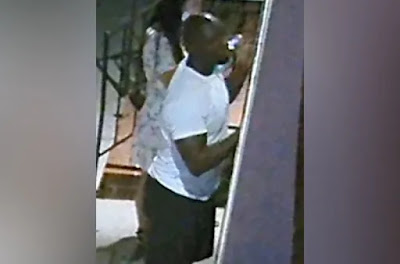 Grammer, an East Village resident, is a voiceover actor on Adult Swim's "Rick and Morty" and the daughter of Kelsey Grammer.

Kelsea Grammer's daughter was one the people stabbed

Spencer Grammer voices Summer Smith on Rick & Morty. Getting involved like that took balls. Good for them.

The backstory on Spencer Grammer is even more interesting (and tragic) and brings this story full circle. She was named after Kelsey Grammer’s sister, who was murdered in 1975 after being abducted following a botched robbery of a Red Lobster restaurant in Colorado where she was a waitress. So while this whole scene was going down, here is Spencer, in a restaurant, battling with a violent criminal, just as her aunt had done 45 years ago. Kelsey Grammer’s father was also murdered in the late 60s, so this family has had its share of tragedies.