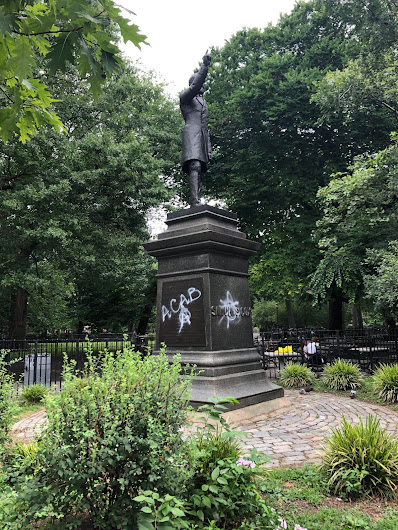 From the EVG inbox: A reader shares that someone tagged the statue of Samuel S. Cox at the Seventh Street and Avenue A entrance to Tompkins Square Park.

Cox (1824–1889) was a longtime member of Congress who "spearheaded legislation that led to paid benefits and a 40-hour workweek for postal employees."

However, according to the History News Network: "Cox fancied himself a champion of the United States Constitution but somehow his interpretation of the Constitution always seemed to deny rights to Blacks. On June 2, 1862, a year after the Civil War had begun but six months before the Emancipation Proclamation, Cox argued in Congress that the United States was made for white men only."
Posted by Grieve at 2:30 PM

I remember the tag from some years ago, possible my favorite tag ever. It just said: WHO?

Crime and all that comes with it is returning to the East Village. Blasio needs to resign.