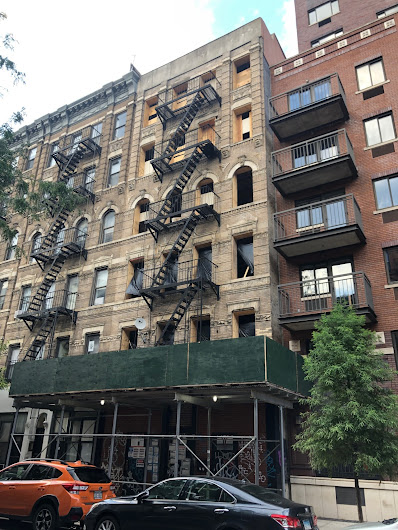 The renovations at 77 E. Third St. have entered the serious gutting phase here between First Avenue and Second Avenue... 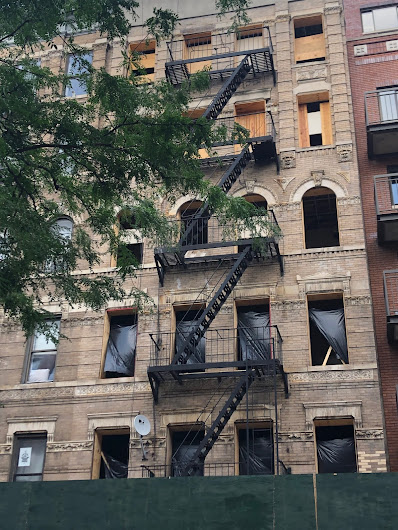 Approved work permits note "minor partition work" in the various apartments. (From the street level, the work appears to be more than minor.)

As previously reported, No. 77 — the former Hells Angels clubhouse, now owned by Better Living Properties — will be converted into 22 one- and two-bedroom units with an expected price point of $3,500 a month following a $2 million renovation. There was also a report that the ground floor will house two retail spaces.

The last of the members moved out of No. 77 at the end of March 2019. The Hells Angels had this six-story building in their possession since 1969.

The Hells Angels reportedly ended up in Throggs Neck, a neighborhood in the southeastern portion of the Bronx. Last week, two members and an accomplice were charged in the fatal shooting of a rival gang leader.

• The Hells Angels have left the East Village
Posted by Grieve at 6:15 AM

Their Leaving was the best thing to happen to the LES.

In these dire times--the EV/NYC turning into a lawless Wild West--I wouldn't mind the the presence of these outlaws.

I wonder if they will find any skeletons in the walls of that place during the gut renovation. If walls could talk I am sure they would have a lot of stories to tell about what went on in that building.

IMO, there aren't enough shamans, priests, exorcists or sage in the world to get the bad energy out of that building.

That time.... they found military grade C4 explosive stashed behind the building in the marble cemetery and shut down a perimeter around it. Yeah we know where that came from

I remember when some poor kid was killed by shrapnel from Hells Angels fireworks in a galvanized trash can. They were supposed to kill members of other biker gangs to be full members back in the day. Is that still their deal?

I wonder how many skeletons are in most in NYCs buildings

That other time... when a kid moved the cones to park and got shot in the stomache. Grieve ya got an archive link on that?

I remember in the early 1980s when a kid had his hand blown off when he threw an M-80 into a steel barrel during one of the Angels' legendary 4th of July celebrations, don't remember one being killed. I also remember the cinderblock wall that used to be right across from their headquarters that was painted with the names of members who had died or been killed; its demolition and the subsequent construction of a tasteful red brick wall to enclose a garden was one of the first signs of the coming gentrification of that block. Finally, I remember in the aftermath of 9-11, the Angels hung a massive American flag across the street, where it stayed for months. In that wounded city, where the Stars and Stripes were showing up everywhere, there was always something comforting about seeing it hanging there so defiantly.

The photographer Leigh Smith has a great shot of it - actually it's the only image I've ever seen - on his website: