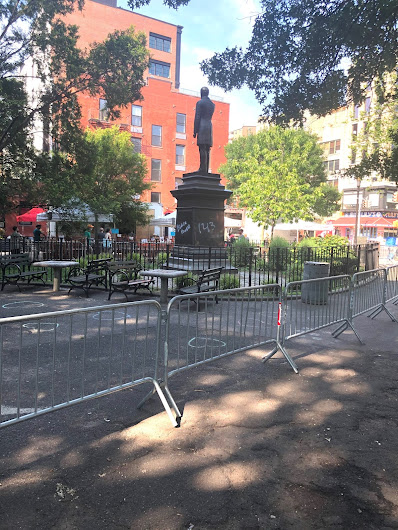 The NYPD put up barricades last evening around the Samuel S. Cox statue at the Seventh Street and Avenue A entrance to Tompkins Square Park. Police told residents who asked that they were there to protect the statue. (They've also restricted access to the chess tables.)

There was a large police presence here last night. Three officers are on duty this morning.

Cox (1824–1889) was a longtime member of Congress who "spearheaded legislation that led to paid benefits and a 40-hour workweek for postal employees."

However, according to the History News Network: "Cox fancied himself a champion of the United States Constitution but somehow his interpretation of the Constitution always seemed to deny rights to Blacks. On June 2, 1862, a year after the Civil War had begun but six months before the Emancipation Proclamation, Cox argued in Congress that the United States was made for white men only."

Earlier this summer, the city announced it was removing the statue of Theodore Roosevelt — long considered a racist symbol — from the American Museum of Natural History's entrance.

The death of George Floyd has led to the removal — by protesters in some cases and city leaders in others — of statues across the country because of the racist ideals they represent.

It wasn't immediately known if any direct action against the Cox statue was in the works.

A reader says they police removed the barriers from around the chess tables on Monday afternoon... 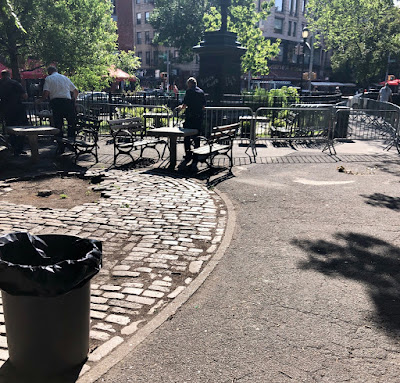 Time to remove that statue. Replace it with one of Allen Ginsberg or Ted Berrigan or Charlie Parker. Or all three.

why all the barricades? taking up all the chess tables regularly used by locals to protect an inanimate object from paint? defund nypd asap they clearly have nothing to do

Getting upset over an 1862 statement to Congress trivializes the death of George Floyd.

Leave it up or TAKE ALL OF THEM DOWN. We cant rewrite History.

Charlie Parker statue would be great. East 10th street was backup I guess with out 15 cops cars parked there from sundown on.

Here’s a solution we can all agree on: Just put up a statue of Ray holding an egg cream and a hot dog. Problem solved.

Charlie Parker statue! We can do this New York!

Don't trash the other statues, park them all somewhere together. Statue Park as a tourist attraction in the Adirondacks next to North Pole NY.

how about random Punk rock icons scattered around Tompkins square

Some people don't know what to do with themselves.
Leave the statutes alone. Re-fund and stop persecuting the police.
They protect all of use from the bad guys.

NYPD finally decided to show up- for this?? So much violence happening at 14th and 1st Ave but never a cop in sight, even knowing this is a hotbed for street violence. Disappointing.

What a perfect example of wasting money, and why they need to be defunded.

Yeah, let's just forget those ancient 1860s. Nothing that happened all those years ago has any relevance to racism. 🙃

Sunday morning during a peaceful lineup of farmers market patrons there were barricades, a police car and 6 cops. But you know, drag racing, roaring motorcycles and huge crowds on friday and saturday night is too difficult for the police to respond to.

These people are so annoying. You would have NO statues if you feel the need to agree with everything someone from that time did. The statue is honoring good things the person did and that's it. The people are just following each other and going nuts. Taking down Confederate statues does not mean taking down every statue YOU don't want. It has to go through a process.

No one knew who Samuel S. Cox was until Grieve pointed it out. I'm for getting rid of old boring statues that most people ignore. I'm totally down for something rad like Charlie Parker or even an abstract sculpture. We can employ artists and that's always a good thing.

Just asking , since some people commenting here may not know. Does anyone remember who neighborhood artist Michael Stewart was and why we rioted at TSP for him in 83 ?

Yes, John, I remember Michael Stewart. I was in TSP at least 2 times a day, walking my beloved dog. At that time, the dog area was the large lawn in the center of the park, in front of the bandshell.Loved the hood then - quite peaceful in comparison to now. We had a bad reputation, and great vibes.

Still? 5 cops, an suv and pice can parked in the tables. And barricades...

Graffiti artist murdered by NYPD for tagging in the train station. RIP

Those who want to see statutes taken down honoring racists and slave holders are not rewriting history. There is a huge difference between teaching about them in history class and putting up a statute to honor them. We shouldn’t have statutes that honor people that don’t deserve respect because they promoted hatred racism etc.

Leaving up statues honoring racists that are placed where people have to see them while utilizing public spaces is wrong.