Odessa is closed for now, but will it reopen? 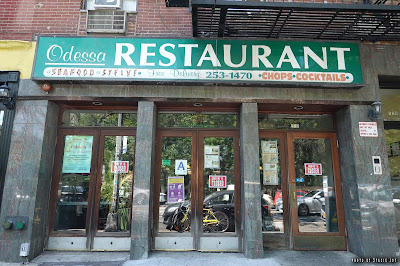 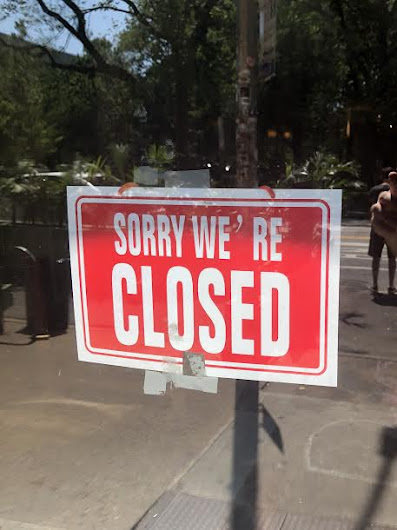 After hearing rumors on Facebook (one post was shared more than 1,100 times) the weekend of July 10 that Odessa was going to close, EVG correspondent Stacie Joy received in-person confirmation on July 12 from longtime manager Dennis Vassilatos, who shared that the diner was shutting down on July 19 after a prolonged slump in business due to COVID-19. He also said at the time that there wasn't any truth that the space was closing for renovations.

The news brought out some remembrances of a diner that has had a presence on the block since the mid-1960s.

By this past Friday afternoon, however, the story had changed. As Gothamist reported, co-owner Steve Helios stated that Odessa was only shutting down temporarily. "We'll be back," he said in the post, eyeing a return some time in 2021. The super for the building, owned by Odessa partner Mike Skulikidis, also confirmed the renovation to Gothamist.

This news took the staff by surprise. None of the employees on Friday evening were aware of these plans. In a conversation with Stacie, Vassilatos maintained that Odessa was closing, that he hadn't heard from ownership yet about any other arrangements.

Stacie asked if it was possible that she'd see him in the same spot this time next year and he said, "anything's possible in life, but don't count on it."

Since Sunday, we've heard from several longtime Odessa regulars about what is happening moving forward. Many of them are surprised and confused — and hopeful. On Sunday, one longtime customer who stopped by for a last meal to go was told by staff that Odessa might be back in five or six months, or else the owners might just rent out the prime space to another restaurant.

There are several theories that regulars are floating, including:


So for now, Odessa is closed. There aren't any signs on the door stating a renovation. We didn't spot anyone inside the space either Monday or yesterday. And given that Odessa lacks a social media presence, there isn't any unified message about the future to customers. 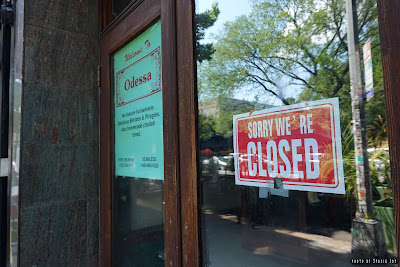 Odessa Restaurant opened in this space in April 1995. The original Odessa closed next door in August 2013

Email ThisBlogThis!Share to TwitterShare to FacebookShare to Pinterest
Labels: Odessa, Odessa Cafe and Bar, the Odessa

Seems to be some real disconnect in their partnership. Why dont they talk to each other?

None of this bodes well for Odessa to ever reopen. People seem to be at odds with each other within the ownership of the restaurant, and their lack of clarity to the public AND to their employees makes me think we've seen the last of Odessa.

This reminds me of when Moishe’s closed down, sending out so many conflicting messages and laving everyone confused and in turmoil. It’s so unfair to the employees and loyal customers. You get the feeling in these cases that the owners are telling employees one story either to give them hope or to save face, and giving another story to the media as the truth comes out. So far we have three conflicting stories: they are closed, they are renovating, or in one case they are retiring to Greece. Gothamist should have spoken to all parties involved and not just to the one who doesn’t own the building.

I felt bad for Dennis this weekend. A lot of people were coming in getting what they thought was their last Odessa meal. Some people brought up the Gothamist article that he didn't know anything about. People kept asking questions and he finally retreated and shut down.

A mystery, hmm...seems an odd time to be making renovations. Who can afford it, especially with no promise of better business ahead? It makes sense to me that maybe the real intention is to close, but leave the door of opportunity open just in case things get better or retirement plans don't work out. As we've seen, a lot can happen in just a few weeks.

My hope is that they will return, but I'm not betting on it. Having another restaurant take over could be a reasonable solution.

I tried to Seamless an order for pickup last Wednesday as a final hurrah and when I went in he was busy and yelling all over the place. Order ended up getting canceled too.

I'm guessing that even if Odessa does return, it will not be as the slightly cheesy 24-hour diner with the massive menu that we all knew and loved. Why renovate what was just fine to begin with if you plan on appealing to the same crowd, none of whom cared what the interior looked like? Smoke and mirrors...

I'm guessing the building owner is keeping the option to reopen as Odessa if indoor dining ever returns to NYC. And why not? He's not going to rent that space to someone else right now. Most restaurants can't just take a nap for "renovations" because they have to pay the rent. That's not the case here (though I haven't investigated what kind of mortgage is on the place; in a lot of these old-timey buildings, there's an I/O mortgage secured by maybe half the value of the property).

I was thinking the same thing. Moishe owed nothing to the community - he served it well, but it wouldve been nice to get some notice. Odessa situation is almost the same story..

As more and more workers , like the Odessa staff , lose their jobs and evictions resume things are going to get rapidly even more insane. People are privately telling me on social media they are going to move to more rural areas where they can grow their own food and rents are much cheaper.

Or could be that they're just peelin' potatoes.

It's good that you're not a business owner. Now is a perfect time to renovate, if you have planned on doing it before. Especially if you don't pay rent.

Same crowd might not be enough for making money anymore. As a long time client said to me: People don't eat this food anymore.

Dennis was in a bad mood ever since the pandemic had started. In 23 years of knowing each other, I've never seen him like this, time and time again, week after week.

Totally agree. I ordered a last hurrah meal a couple of weeks ago and they ended up not having the potato pierogies I ordered. I missed one phone call from the restaurant and picked up their second call. He was so angry on the phone saying he'd called "many" times and I kept not picking up and when I apologized for missing the call he muttered "Jesus Christ" under his breath and didn't even explain that this was all about switching out pierogies until I had to ask if something was wrong. Worst customer service I have ever received there in the 30 years I've been a patron. This back and forth is such a horrible position to have put these loyal employees in, especially on top of the already stressful pandemic. I hope they all manage to find work elsewhere.