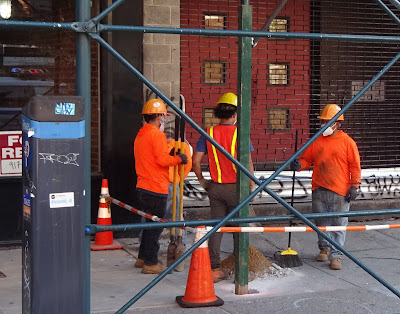 Workers arrived this morning to erect a sidewalk bridge outside the former Church of the Nativity and the adjacent building here on Second Avenue between Second Street and Third Street. 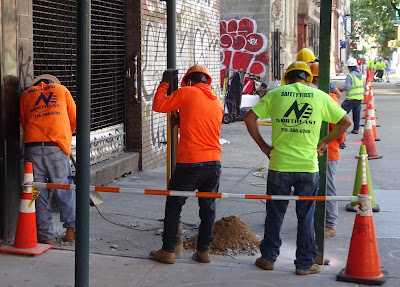 Demolition permits were filed back in March for these now-empty structures.

As previously reported, Gemini Rosemont Development purchased three contiguous parcels, including the former La Salle Annex at Second Street, on this block for an unspecified future development. Gemini Rosemont closed on 42-44 Second Ave. and 46-48 Second Ave. in March for $40 million. They paid $14.5 million for the La Salle property at No. 38 this month.

The total lot area of the assembled site is 14,075 square feet, according to city records. The combined development site can accommodate an as-of-right buildable area of 75,908 square feet and up to 101,210 square feet of residential area under the city's Inclusionary Housing Program.

The NYPD was also on the scene this morning as the sidewalk bridge and scaffolding work begin...

Makeshift living quarters have grown here outside the former church in recent months. The Department of Sanitation was expected to clean up the discarded furniture and other items here. They had not arrived as of 11 a.m. 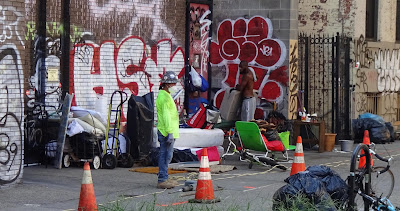 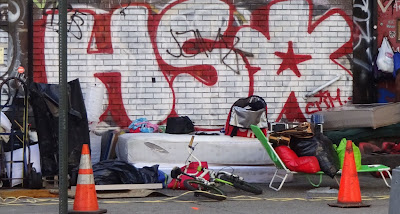 A new location for crusties to hangout i guess

As a fan of most brutalist archeticture I regret never stopping by to check out the inside of this church, does anyone know if the are photos of the inside?

At Rikers Island, I spent time in a medical unit where most of the inmates were dosed up to the max on either methadone or some other drug. Their "issues" were not much different from the guys hanging out in front of Nativity Church, but they were invisible to society, over on "the rock" away from public view. At Lewisburg Penitentiary in Pennsylvania, in a basement holding area, there was bunk after bunk of Vietnam veterans, struggling with all the violence of that senseless war, and making a futile attempt to drown their frustrations with drugs. At the Morris County Jail in New Jersey (the old jail behind the courthouse) there was no detox program, anyone who came in on crack cocaine went through a week or two of intense pain and splitting headache, unable to eat or drink, and barely able to get to the toilet. We would all ask for Tylenol, and then give the pills to the new arrival, so that at least they could get some minimal pain relief while they got off crack. In the Metropolitan Correctional Center in Manhattan, if you had "some influence," you could get almost anything, until they busted about ten percent of the staff for delivering contraband to the inmates. So what is the lesson to be learned here? Deep social problems are either visible, and troubling to people who have some concern in their hearts, or invisible, behind bars, and hence only troubling to those who have made some effort on behalf of those whose lives have come to ruin.

2nd Ave between 7th and 3rd, is the longest stretch of nuisance around the neighborhood. Crusties, junkies, violent mentally ill. I don't care who's fault is it, I don't think it should be major cities problem, and that the well being of the majority need to be sacrificed for them. Get them out of here.

This area has not only been home to homeless, there has been heavy drug activity and drug sales. I live not far from here and on multiple occasions have seen people with needles just about to shoot up, I have walked into drug deals, and have seen people with wads of cash hiding in between cars to count it all. The area has drawn other drug users to come here. Not that long ago there was a shooting early in the morning, which I heard the pop pop pop noise in my apt. I hope the demolition of this building forces the clean up of that area, because where are the elected officials? City council and the mayor?

The disdain for the homeless is truly disturbing. It shows we live in a society not only lacking empathy, but an unwillingness to change anything that will resolve the problem. The "Got mine, F U!" attitude has permeated our culture so much, it's disgusting. Don't like seeing homeless people? Fund housing and healthcare. So many people want the homeless to just be swept out of sight. Get ready for a wave of new homeless when the economic crisis really hits the fan - so many 'normal' people will be out on the streets. What then?

Anon 9:41am Absolutely correct. As the billionaire on "Succession" said, "the cruel United States." I live near here. When Reagan came in and slashed social programs, as have most subsequent administrations, this is what happens. So many of these "crusties" as they are condescendingly called are actually veterans and the mentally ill, now pretty much abandoned by our predatory capitalist, I got mine and that is all that matters, no idea about history or basic decency, society. Compassion people! It could easily be you in misery on that sidewalk.

In as much as this is the parish church of Dorothy Day, the fact that the homeless settlement is being either ignored by the church or denigrated by the community is truly ironic.

You are correct about the sad slashing of social programs during the Reagan era (never to be reinstated) which dumped the majority of the mentally ill out on their own on the streets, unequipped to take care of themselves.
Also so sad that this gap between "them that has and them that don't" keeps getting bigger and bigger (Bezos, Musk, etc.) The legions of the homeless will grow and grow as the population ages and the Corona virus wreaks havoc on our economy. Heaven help us all.