As the Church of the Nativity closes for good tonight, take a look at the original structure 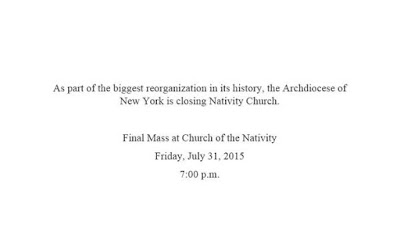 As previously reported, the Roman Catholic Archdiocese of New York is closing the Church of the Nativity at 44 Second Ave. between East Second Street and East Third Street.

The final mass is tonight at 7. 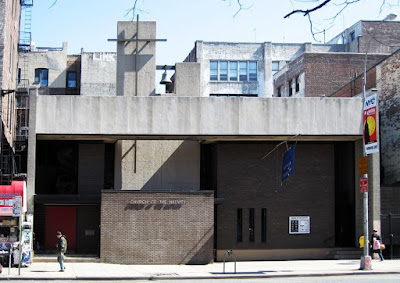 On this occasion, volunteers posted a photo of the the original Church of the Nativity building. Via Facebook yesterday:

The first church, located at 48 Second Avenue, was built in 1832 as the Second Avenue Presbyterian Church. In 1842 it was sold to the newly formed Nativity Parish. This building was demolished in 1970 after a fire. It was rebuilt by hardworking parishioners — hence the new, smaller church built with cinder blocks now located at 44 Second Avenue. 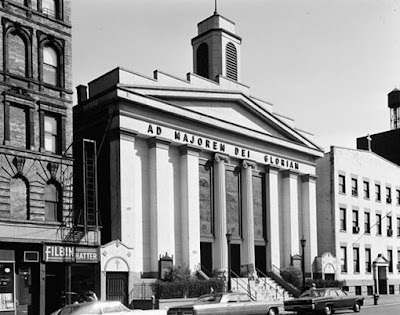 The Church of the Nativity is merging with Most Holy Redeemer on East Third Street between Avenue A and Avenue B. In total, as amNY reported: "New York City's 112 parishes will be consolidated into just 55 new parishes due to 'changing demographics' and a shortage of priests available to say mass."
Posted by Grieve at 4:20 AM

What a magnificent building it was; part of me is glad it burned in 1970 so I don't have to watch it getting torn down now. But even tho I am not a fan of Brutalist architecture, I am so sorry for the parishioners who have made its replacement their home for almost 50 years. They should be allowed to keep the house of worship in which they have invested so much time, effort and love.

I can't help but think to myself that the newer church's design is "so 1970," sort of a hip-modernist reduction (or cartooning) of conventions of ecclesiastic architecture. Even so, by this token, the newer building should be preserved for its historic architectural example.

These churches would get much more local support if they were more inclusive and treated gay people as equals. I would love to have a local church to go to.

the church on 2nd at 7th seems to have LBGT events

But even tho I am not a fan of Brutalist architecture, I am so sorry for the parishioners who have made its replacement their home for almost 50 years.

And I'm also sorry for the parishioners—of whom a significant proportion were Latino. Most Holy Redeemer is a beautiful, photogenic church, but I'm not looking forward to the construction of another condo tower in this former slum. Also, if anyone has been down to the courtyard in the back of the building, they know the courtyard in back was shored up by very old fieldstone walls, probably pre-1850. Gone, all gone.

Huh? That's the Jesuit motto on the old church. What's it doing there?

The church that they're merging with is Redemptorist, which is a missionary order and therefore creepy. It's also pretty empty these days, so they can use the extra bodies.

I can't think of anything more heartening than watching the catholic church collapse under its on weight. Good riddance, this is what you get for alienating your faithful and violating their trust.

Churches closing meanns fewer places for poor and homeless to get meals clothes etc. Not good at all.

Its a pretty bad building, apart from anything else. Zero relationship to its surroundings, confused arrangement of forms, the kind of building that gives Brutalism a bad (worse) name.