XYZ puts up its letters on East 7th Street 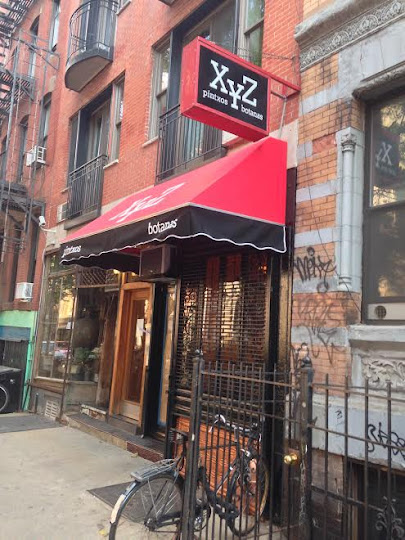 The signage has arrived for the new cafe opening at 102 E. Seventh St. between Avenue A and First Avenue.

XYZ will be serving "Spanish-influenced food," according to documents (PDF!) filed at the CB3 website for this month's SLA committee meeting. (This item for a new beer-wine license was not heard at the meeting.)

One of Europe's oldest cuisines, Basque, has a toehold on the west side. Though its roots lie in the Pyrenees, here it's surrounded by high rises in the form of nearby condominium building sites. But barring the occasional construction noise, this restaurant manages to feel unruffled and intimate. A husband-and-wife team serves not only in the namesake pintxos, the Basque equivalent of tapas, but also full-sized entrées. Simple dishes deploy characteristic Basque ingredients — seafood, peppers, pork—to great effect.

The previous tenant here, Tink's Cafe, closed in early June.
Posted by Grieve at 4:19 AM