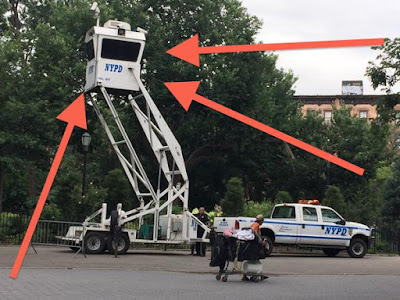 In our post about the newly installed NYPD Patrol Tower in the middle of Tompkins Square Park, someone began leaving comments as NYPD TEXT TOWER.

An example of the all-cap comments:

WE DONT SEE HOMELESS IN PARK BUT WE SEE LOTS OF U ON TINDER.

BE SURE TO WRITE THE @NYPOST AND LET THEM KNOW #TOMPKINSSQUAREPARK IS VAGRANT FREE SO WE CAN GO HOME. BORED UP HERE. #EASTVILLAGE

CHRIS FLASH HAS BEEN SPOTTED IN THE PARK DOING PRE-CONCERT PREP FOR THIS YEARS 88 RIOT REUNION CONCERT. HE HAS A LARGE AMOUNT OF DONUTS IN HIS POSSESSION USE RESTRAINT WHEN APPROACHING HIM. CODE BLUE.

I just read the tweets. A couple are funny but most are just the same tired jokes posted when commenting here.