Homeless model lived for 6 years on an East Village rooftop 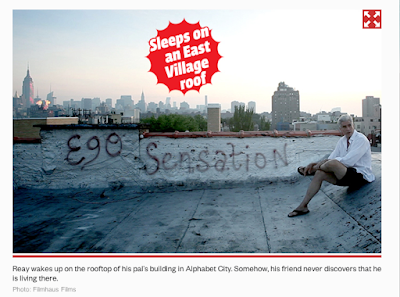 Mark Reay, 56, is the the subject of "Homme Less," a documentary due out at the IFC Center on Aug. 7.

Despite some steady modeling gigs, his "income just about covered my gym membership, locker rental, cellphone, health insurance and food." The Post shares some of his story today:

Given my slick, manicured, 6-foot-3 image and seemingly glamorous job as a model, actor and photographer, people will find it hard to believe that I lived without a home for six long years in New York City. Only my closest friends knew the truth.

Sure I lived in the East Village, but not in an apartment. I slept in the open air, battling the elements inside a sleeping bag on the rooftop of a friend’s building. From August 2008 to July 2014, my only shelter was a tarp.

There was a small space on the roof with railings around it, overlooked by no one. I had to hang onto a fence and walk out onto a ledge to access it, but it was my own 8-foot-by-3½-foot triangle of safety and privacy. With a tarp pulled over me and a plastic juice bottle to pee in during the night, I could get a pretty good sleep.

These days he lives with his mother in Northwestern New Jersey.

Cool story! If he had a good wi-fi up there, I could see how one could make that work. If nothing else, dude saved a lot of cash on rent. Shit, I should start scoping out rooftops.

Seems kinda bogus. Im guessing he spent more time crashing at friends apts than he is admitting to. A tarp and blankets dont do much during big snowstorms or 15 degree nights or heavy downpours. Where did he stay during Sandy? Being homeless is not to be romanticized or glorified. There are holes in this story. Anon 4:24- good luck with that. You will need it. Especially if you have to defecate with nowhere to go. This is a ridiculous story and movie. Another faux homeless idiot. Wifi? No power up there bro. No charge on phone. Do you leave blankets up there? Hope they dont get wet/stolen? Nothing cool about this story. Dude is broke and lives with Mom. Im sure she will be thrilled to see this. This guy is an idiot.

I was reading the story in the Post, and I can't believe he was going up to the roof of his friend's building for six years and never ran into the guy!

Oh yeah, "homeless" with mom's house in Jersey????? Can and will tell a true tale of nowhere to go….

@6:07 you sound like a typical EV Griever, staunchly anti-everything.

Oh, my first thought is that this was about Ellen Turrietta.

Why not just crash with the friend? I couldn't allow my "friend" to live on my roof. I'd have to let them stay especially in bad weather...at least until we could find a reasonable solution.

Anon 10:11 pm. As a formerly homeless EV Griever Im anti this clown. I know from personal experience that their are holes in the story. Please STFU. Most people wouldnt know but anyone with actual history of being on the streets would know.

I also find this story suspicious. He had a key to his friend's building, so they must have been good friends. But then he goes in and out of the building to get up to his hiding place on the roof for six years and goes totally unnoticed? And he had a tarp, but he would have still been exposed to the elements in the winter. I wonder if he crashed up there sometimes but maybe he didn't really live there all the time?

Just another deluded individual who thinks his story and "talent" are worth foisting on the thinking public. Obviously living with his mommy now, we can all probably say to him, "Hey...we know your mother always told you that you were special, but guess what....you're not."

Warhol said it...15 minutes of fame...well the movie is much too long...15 minutes would have been more than enough.

truly homeless folks are forced to live out in the elements 24/7 with no relief. and no one cares. little rich boy crashes out on his friend's rooftop BY CHOICE, and somehow this is worthy of a feature length documentary????

this is exactly the kind of self-aggrandizing tripe these well-off-but-wannabe-struggling rich coddled spawn of the elites bring to the table as their "NYC experience".. the typical "omg im roughing it in NYC, LOOK AT ME" crap they're constantly spewing in a pathetic attempt rebrand themselves as struggling, street savvy New Yorkers. meanwhile they have unlimited trust funds and rich parents as a back up plan, should their "starving artist" fantasy run it's course.

While I'm calling BS on his story, there is nothing to prove that he is "rich." In fact, if he is stuck living in NW Jersey, he probably is straight middle class. Or am I missing something and middle class is now "rich?"