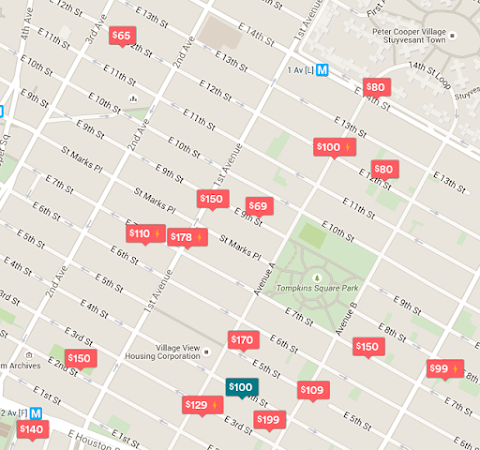 The East Village is the most popular neighborhood for Airbnb rentals, with 28 percent of the neighborhood's rental units converted into illegal hotel rooms, according to the analysis by affordable housing advocates the New York Communities for Change and Real Affordability For All.

In covering the study, the Daily News reported that the 20 most popular Airbnb neighborhoods — in Manhattan, Brooklyn and Long Island City — have lost 10 percent of their available housing units to Airbnb.

The study also found that the average rental was available for 247 days a year, and rented 109 nights a year, dispelling the notion that Airbnb users are just tenants looking to rent out their apartments when they happen to be out of town.

And Airbnb's reaction to the study? Per the Daily News:

Airbnb blasted it as “lies, fuzzy math and faulty stats.”

“The notion that 1 in 4 apartments in the East Village is rented via Airbnb is not just ludicrous, it is also not supported by a single piece of data,” said a spokesperson.

You may download a PDF of the study here via the New York Communities for Change site.

Meanwhile, last month, Gothamist wrote about a programmer who created Inside Airbnb, which "extracts every publicly available bit of information about Airbnb rental listings across New York City."

The data show how many of the listings are for an entire home (red) versus a room in an apartment (green) as well as how many are controlled by the same host, among other things.
Posted by Grieve at 4:30 AM

A friend was telling me how a friend of hers rents one apartment in Bushwick for her and her husband to live in and rents another apartment that they rent out through AirBNB. It's how they make their living. I didn't realize people were going that far with it!

I heard well over a year ago that AirBnB was doing this and more: to my knowledge, they're actually renting out whole buildings this way.

Now, I do know people who rent out single rooms in their apartments via AirBnB, but it certainly makes more sense to do it in a systematic, wholesale way—that's where the money is. As long as they can legally swing it, why not?

Welcome to Millennial New York. It's been waiting for you.

the other issue is the cities tourism agency, NYC & Company continues to produce false tourism numbers when they tell the public more visitors and there are more illegally rented apartments. NYC & Company continues to say nothing about illegal hotel rooms, air b&b and other organizations who take apartments and turn them into a corporate business, yet there is a housing crisis and ppl can't find apartments. There is no activism at this agency to help the real hotels out and promote safe tourism practices in NY. This is what happens when you have a bunch of political hacks who are not from NY running this agency.....

this map doesn't even take into account buildings like the one on 1st Street (#47 1/2) that has been operating as an unlicensed 'hotel' for years- long before the invention of AirBNB....

If I want to report an illegal Airbnb hotel apartment in my building who do I call, this guy sends his friends to rent apartments in their names , my tenants (I am the building super)
get harassed with noise all the time, the owner is or cant do anything, he keeps telling me they are his friend but See his ads on this illegal Airb&b website for 200$ A NIGHT for a 1500$ a month studio.

"Airbnb blasted it as “lies, fuzzy math and faulty stats.”

Beware. Airbnb, like Uber, uses the same BM that Scientology uses, attack, sue and destroy anyone who dares to defy them. On a recent Chris Hayes show on the NYC Uber issue, Chris Hayes stopped the Uber shill who had used the bullshit expression “shared economy” at least three times in his opening talking points. Both Airbnb and Uber use state of the art technology in their BM to provide a service but there is no “shared" economy here. In the case of Airbnb (in Manhattan), just a digital version of an illegal hotel business, in the case of Uber, a digital version of Gypsy cabs.

I'm inclined to think these stats are BS....The first thing I noticed is that there are at least a dozen "apartment" for rent in the middle of Tompkins Square Park. Um...yeah...that's giving your "study" some solid credibility right there...

I can say that I see a lot of unfamiliar people in my building coming and going with carry-on luggage.
I really think that this is a major factor in the upward pressure on rents.
Do the math: if a one-bedroom that might rent for $2500 can go for $150/night, that equals $4500.
The landlords know this, and they want a piece. So the rent gets jacked to close the gap.
I truly hope a crackdown is coming.

And then there are all the illegal hotel rooms within the apartment buildings which belong to our well known slumlords. They cater often on TripAdvisor and similar pages. Just punch in your address and you'll be enlightened.


If you go to the Insideairbnb site, you'll see that every one of the dots links to an actual Airbnb listing. My guess is that there are dots inside Tompkins Sq Park because whoever manages the Insideairbnb site wants the dots to be clickable, and the map is simply too dense with rental properties to allow for each dot to appear on the exact location of the apartment.

All you have to do is walk the streets in the EV and see all the people with wheelies walking around looking for their next AirB&B or a cab. My building is awash with them.

You can also call 311 and give them the details.

Example: A new tenant moved into my building a few months ago. After a month, it was obvious from all the people coming and going with luggage, that it was operating as an AirBnB rental. I fortunately was able to find the listing online, and emailed it to the management company. They had the tenant kicked out of the apartment within two weeks.

You can report suspected illegal AirBnB hotels at the Mayor’s Office of Criminal Justice page:

New York City has always gone to the "highest bidder". This business model perpetuates that trend.

Don't forget 402 E 11....constantly home of a variety "guests" of the prostitute, "actor", and euro trash who live there. There are so many strangers in and out of that slum, it'll make your head spin!

How much of this is unreported income? The Airbnb website leaves it up to the host as to whether they fill out a W9 form or not. Our taxes can go up while we subsidize someone else's moneymaking scheme? No doubt these are also the first people to start complaining about how "their tax dollars" are being spent.

"The first thing I noticed is that there are at least a dozen "apartment" for rent in the middle of Tompkins Square Park."

The zoomed in map does not have hotels in the park. There's just so many illegal hotels, the algorithm has no place to put the dots when the map is small.

Call 311 to report it. When prompted, say "illegal hotel." You can do it anonymously if you'd like.

Landlords all over NYC having been loving this scheme for a few years now. Certificate of occupancy rules, rent stabilization rules and tax abatement rules are being openly defied on a massive scale. When a landlord wants to cash in on the illegal hotel bonanza, bringing in 10 or 20 times the legal rent by converting an apartment to an illegal hotel "suite", the tenants have almost no recourse. Many of our elected "representatives" are bought and paid for by the real estate lobby and will claim that their "hands are tied".

For example, in 2008, the property owner of 1 Bank St. in the West Village purged all but the longest term tenants in his building by refusing renewal leases, then converting dozens of apartments to illegal hotel use.

Although all the tenants who were refused renewal leases were supposed to be guaranteed renewals under J-51 tax abatement legislation, pols and city agency representatives claimed there were "loopholes" that "tied their hands" in preventing this travesty. Property owners all over the city are "double dipping" by grabbing generous tax exemptions and abatements, which stipulate that rent stabilization's rules must be adhered to, then defy those rules, refuse renewal leases and convert apartments to illegal hotel use.

To read the sickening details, the Village Voice coverage of the 1 Bank St. story is here:
http://www.villagevoice.com/news/motel-sucks-6419999

Ummm, not sure where to direct my vile- but Grieve, may be time. Take the boy out of ..... Recent posts are too jersey - Staten Island . Wait I just threw up a third time in my mouth...

When landlords are doing this with entire bldgs it's one thing but when individuals are renting out a rm or their apt seasonally, doesn't this point more to how impossible it is to afford to live in this city? You have to rent out a room continually to afford paying the astronomical rents?? Come on people, we have condos/rentals operating as illegal dorms complete with fire hazard roof decks & way too many people per unit &, of course, the abysmal behavior that goes along with college living. But that's explained away as "that's NYC"?

This link doesnt work - who do you report these to? I want to rat someone out