How Grace Farrell came to die outside St. Brigid's in February 2011 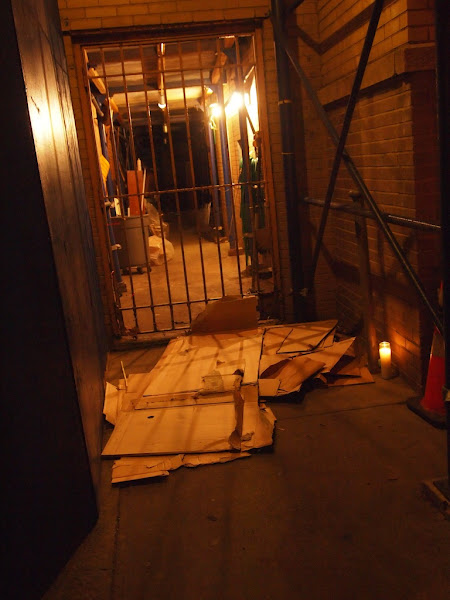 On Feb. 19, 2011, a woman froze to death in her makeshift bedding on Avenue B between Seventh Street and Eighth Street in a doorway at the under-renovation St. Brigid's.

In the days that followed, there were several media accounts of the woman, Grace Farrell. From the Daily News:

She came from Ireland half a life ago, a blue-eyed 17-year-old determined to make a splash in New York's art scene with her colorful portraits and vivid landscapes.

On Sunday morning — years after her life started to go bad in a haze of alcohol and a lousy marriage — Grace Farrell, 35, was found dead on the sidewalk in front of St. Brigid's Church on Avenue B in the East Village.

Her body was ice-cold from sleeping one too many nights on the street.

She spent her last night alive on a bed of cardboard in a church alcove. Thin blankets barely sheltered her from the brutal winter weather.


There's now a new documentary on RTÉ Radio 1 in Ireland titled Grace & Emmanuel. The special documents the lives of Farrell and Emmanuel Touhey, who grew up together at St. Vincent's Children’s Home in Drogheda on the east coast of Ireland. Touhey emigrated to the United States a few years before Farrell. Their lives took very different paths, as Touhey became an editor at C-SPAN's website.

In Washington D.C., Emmanuel read the news in the New York papers. Although he hadn’t seen Grace since his time in St. Vincent’s Children’s Home, he wanted her to be remembered as more than just another grim statistic.

“I think despite how hard she tried and how much she hoped to live a life that she wanted to live for her son and for her family, the odds were against her I think from the beginning.”

You can listen to the episode here. There's an accompanying article at The Irish Times here.
Posted by Grieve at 4:30 AM

Grace Farrell shows up in an aside in Warren Ellis' NYC crime novel, Gun Machine. Just a sentence or two, if that, about a body found in a St. Brigid's doorway.

Children who are abandoned by one or both of their parents have essentially died. A child born in 1976 doesn't understand things like shelters and adoption; all it knows is that its primary care givers, its only connection to life, have left it on the side of road, which is effectively a death sentence to that helpless little stone-age brain. That initial hurt can be overcome but it can never be erased. This is why, in spite the support that was available to her, Grace would never be satisfied unless she could somehow repair that connection to her mother, which was a fool's errand. The mother abandoned her once, and apparently the attempt at reconciliation failed. So, she died on the side of the road where her mother left her so many years before. What a world.

Perhaps a poster/flyer with Grace's story.....and print-up a whole bunch of pics/stories of other homeless folks......

.....and PLASTER that fuckin' tower with THE REAL STORY of how we are letting our governments DISREGARD the results of the conditions they create.
It's obvious that certain "leaders" in the community want some type of Tower Of Babble(sic) here.....so let's give it to them. Turn that media spotlight right around, and shine it RIGHT INTO their souls.....see IF they have ANY left.

Her husband was a scumbag wife-beater. He should be behind bars.

There's no way, I suppose, that the writer/documentarian could have known this, but Grace spent the last year of her life struggling to get sober, which makes her death all the sadder. She was a quiet but strong presence in AA meetings, and had a beautiful sponsor who helped dozens of other women before she herself passed away from cancer. But Grace was also unreachable, even as she kept returning after relapsing; at one point she amassed over thirty days of sobriety, and it was like a light flickered on in her, and I saw her smile for the first time. But it didn't hold. A rehab would have been best, perhaps, but she had no resources for it, or she resisted going. After she went absent the last time around, I kept expecting her to return as she had before; and while we see people who relapse and die all the time, there was something about her end that haunted me, and the other seven people who showed up at the sad, makeshift memorial we had for her. It's a lonely end, to die in that place, in the winter, at night. Grace was a lost soul, but knew enough, despite it all, to want to live.

Grace's family should sue the dickens out of the 9th Precinct and NY City/DHS as one of the agendas of neighborhood policing is to do the work to try to make sure such a tragedy never happens. And where was DHS?

Just as it is sad that so much attention has been centered on TSP but has anyone seen Dept of Homelessness Services ANYWHERE around dealing with the issues involved? Any sightings at all? Easier to spot the hawks than DHS.

DHS actually works on the trains and in subway stations. You are assuming that DHS being in the park will make a difference. I see a future EV Grieve post with 100 comments about DHS 'harassing' homeless in the park. Right? Its what you people say about the NYPD. - Why didnt they help this lady? Stop harassing the homeless.- Pick one please. A person cannot be forced into rehab or shelter. The ACLU and the liberals are about rights. So just stop the BS. What do you expect DHS to do?

And people freeze to death or end up in the hospital with frostbite EVERY winter. Hate to break that to you. A post about a missing dog gets 100 comments, search parties, and $10,000 rewards. This post gets a handful of comments. Typical.

If you are destitute on the coldest night of the year, despite having reached out previously for sobriety and deciding to go it alone, wanting to be found in an Irish church's doorway....

It sounds like suicide. Maybe that's what she wanted?

Nice try, Anonymous 1:27--assuming that suicide is what she wanted, when she was probably too drunk at the time to know what she wanted. But we have to rationalize the disturbance of it somehow, I guess ("she actually wanted to die--now I can feel better"). .

I didn't assume. I said "maybe". I would not know what her mental state was. And it is disturbing, and nothing about the possibly preventable death of a person would make me feel better. I have been helping the homeless and less fortunate for decades, and sometimes they disappear and one never knows what happened. I accept the loss, and keep trying to help.

I have friends who have and are battling depression and addiction, and I had a relationship with a former addict who later died after relapsing. Being unable to reach them was upsetting, and I never tried to rationalise it to make myself feel better. Life can be tragic, and it is up to those left behind to deal with it.

This is how it ends for many homeless. They are found dead on the train, in a park, frozen to death. Alone. This is the reality. Its also why when people comment here that having homeless is somehow acceptable or good for the area I get angry. When you dont see a homeless person around they are usually in a hospital or dead. No one claims the body. No funeral or wake. Thats the end game. Maybe the NYPD ' harassment' gets people into shelters or missions where they at least have a chance.

"The opposite of addiction is not sobriety. It's human connection." --Johann Hari

Grace was a vivacious young woman when I knew her. She lived life to the full. She had a difficult start in life but she chose a different road. Things could have been so very different.... Be at peace Grace x

I purchased an oil years ago because I really liked it. I looked at the back of the painting and found her name. Decided to google her. Ironically I'm Irish. I Found this article. I am familiar with addiction and lost a Uncle the same manner. God Bless this Woman,and her Son. Such tragedy.

Thanks for this post. I'm an Irishman, from Grace's generation, living in NYC. She deserved better, R.I.P. Grace.

Grace would have been living in NY in the 90s when I was there. It was a cruel heartless city.