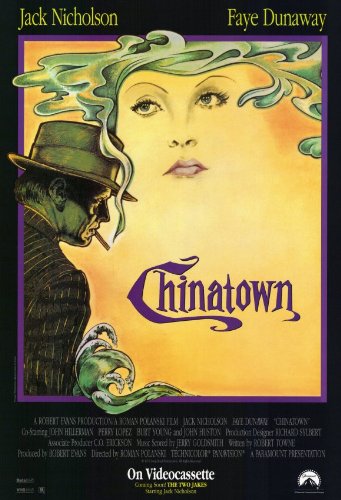 Tonight's free movie is "Chinatown," Roman Polanski's 1974 classic that likely doesn't need any introducing. (According to the organizers, James Franco selected this film for tonight.)

Also tonight! There's a food fair before the film feature five East Village restaurants — Caracas Arepa Bar, Luke’s Lobster, GG’s, Boulton & Watt and Ducks Eatery. According to DNAinfo, who first reported on this, the food vendors will be open from 5 p.m. to 8 p.m. and located adjacent to the park on Avenue A.

Meanwhile, there's live music (from Youth and Vanity) at 7:30 p.m., and the movie starts at sundown. You can head to the Films in Tompkins Facebook page for any updates, especially since rain is in the forecast this evening.

The organizers decided to reschedule "Dog Day Afternoon," which was cancelled due to the threat of rain on July 9, next week... Aug. 6.

The weather forecast has KO'd tonight's food fair and screening.

Showers and thunderstorms likely, mainly after 3pm. Some of the storms could produce gusty winds and heavy rain. Partly sunny, with a high near 85. South wind 10 to 14 mph. Chance of precipitation is 60%. New rainfall amounts between a tenth and quarter of an inch, except higher amounts possible in thunderstorms.

Showers and thunderstorms likely, mainly before 1am. Some of the storms could produce gusty winds and heavy rain. Mostly cloudy, with a low around 72. Southwest wind 9 to 14 mph. Chance of precipitation is 60%. New rainfall amounts between a tenth and quarter of an inch, except higher amounts possible in thunderstorms.

I've never been able to finish watching Chinatown, too much of a snoozefest. It's just like True Detective, all dark and creeepy but gong nowhere slowly. It's kind of like watching molasses roll downhill. Oh well, see you next year.

It's typical Noir, and imo it's extremely good. You should give it another chance and actually finish it.

"Bread and circuses" is metonymic for a superficial means of appeasement. In the case of politics, the phrase is used to describe the generation of public approval, not through exemplary or excellent public service or public policy, but through diversion; distraction; or the mere satisfaction of the immediate, shallow requirements of a populace, as an offered "palliative."

I agree, Chinatown is so boring, and totally overrated. I have seen the whole movie start to finish and there is no there there, but it's a great movie if you have insomnia and need to get to sleep fast.

I have posted this before and will post it again. This movie has the great line that sum of the destruction of our Hood and NYC in general. Like many great movies from the 70’s, evil not only wins but triumphs. BTW, Ebert places this movie in his "The Great Movies" book:

Jake Gittes: How much are you worth?
Noah Cross: I have no idea. How much do you want?
Jake Gittes: I just wanna know what you're worth. More than 10 million?
Noah Cross: Oh my, yes!
Jake Gittes: Why are you doing it? How much better can you eat? What could you buy that you can't already afford?
Noah Cross: The future, Mr. Gittes! The future. Now, where's the girl? I want the only daughter I've got left. As you found out, Evelyn was lost to me a long time ago.
Jake Gittes: Who do you blame for that? Her?
Noah Cross: I don't blame myself. You see, Mr. Gittes, most people never have to face the fact that at the right time and the right place, they're capable of ANYTHING.

Chinatown is for the birds. But Dog Day Afternoon on a warm summer evening, now that is perfect.

I would love to know what movies people who consider Chinatown to be boring find exciting. Yeah, it's a slow movie - that's the point.

You know what would be good in the park? Toy Story. People like that movie.

You know what other movies are boring and slow? 2001: A Space Odyssey, The Night of the Hunter, The Seventh Seal, The Third Man, My Darling Clementine, etc., etc.

Toy Story 2. Scrap Third Man, Orson Welles is only in it for 10 minutes, better Touch of Evil. Add Clockwork Orange. Better Off Dead (yeah I went there).