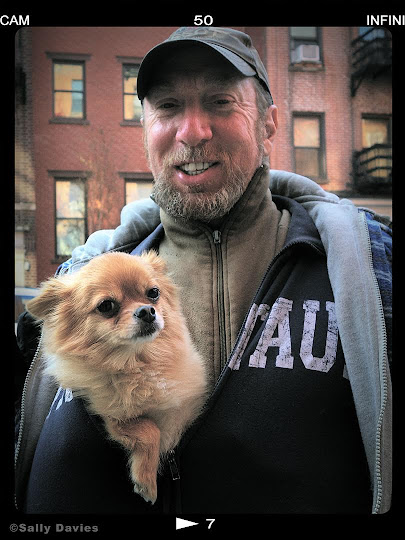 Charlie Romonofsky, a longtime East Village dog walker who was always seen with his chihuahua Sweet Pea, died in his East Fifth Street apartment last Friday. He was 57.

Romonofsky was born and raised in public housing in Coney Island. For the past 20 years he had lived on East Fifth Street where he ran his business, Mr. Charlie's Pet Services.

"He was a huge man who possessed the most gentle soul on the planet. Everybody knew him. Everybody loved him," said one of his clients, Diego Aguirre, who shares a dog with Jamey Poole, a longtime East Village resident and neighbor.

"Charlie's voice would be ringing in the morning air every day outside my window and he would go riding around on his bike with the tiny Sweet Pea tucked into his shirt," said his neighbor and friend Karen Platt. "The contrast between Charlie and Sweet Pea was something to behold, and when asked about why his tiny dog seemed so fearless and confident, he would always reply, 'Well, she's Sweet Pea, Queen of the Block.'"

Said his close friend Sally Davies, "Charlie was an eccentric. An original East Villager, a stand-up guy and a man of his word."

His friends created a memorial outside his apartment building between Avenue A and Avenue B. 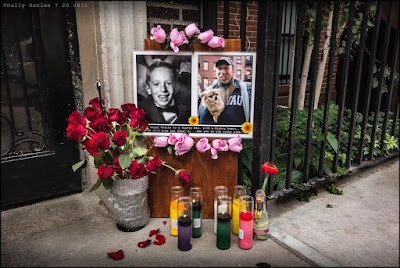 The memorial reads in part: "Happy trails to a Mighty Man, with a Mighty heart. We will miss you Charlie." 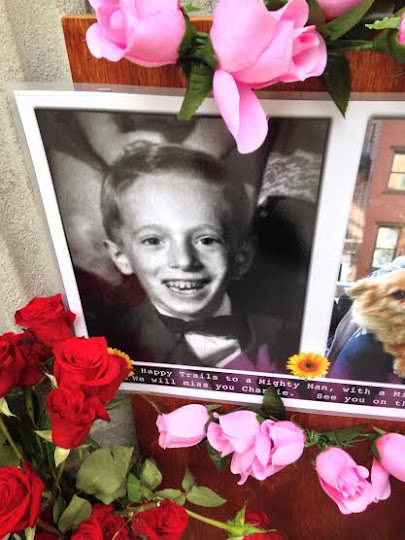 The memorial grew throughout the day yesterday... as did the tributes from those who knew him... 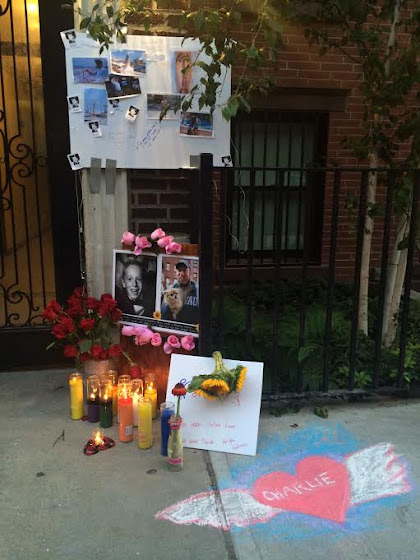 Said another friend: "Charlie was such a a larger-than-life character. Gregarious, sweet, helpful, funny, gentle but tough — infinitely likable. He was really one of a kind."

There's no word just yet about a memorial service.

I don't know why the post disappeared earlier for about an hour. I found a version of the post in my drafts in the Blogger template. This version is missing the last photo and comment from a neighbor. I'll try to redo that.

Charlie was pure of heart- dogs sense that too and maybe that's why they loved him so much. He was a great guy and my dog's weekend at his apartment was so much fun for him. I wish he knew how much everyone cared about him and that we could have helped him get through the darkness. This news hit hard and the East Village is a less vibrant place without him. I hope Sweet Pea and he are reunited in eternal love.

I'm so sorry; what an awful, premature loss. I hope one of the friends can take in Sweet Pea.

I didn't mention in the post that Sweet Pea died a few years back.

Charlie was a magical man. In the beautiful Sally Davies photo in your post he is holding my dog Hunter. His compassion for animals was amazing. He will be deeply missed by all of us especially his four legged friends.

5 street will never be the same. Never forget the blackout BBQ. I will miss you bro.
Say hi to Sweet Pea.

Oh how sad. One more EV original, and such a kind and loving one, gone, and I am sure it will not be just humans who will miss him. Go well, Charlie, and I pray that Sweet Pea, Queen of the Block, accompanies you on your eternal travels...

I never met Charlie, but judging from the comments, he brought happiness to many. I wish our paths had crossed. Condolences to his friends and family. May his light and memory bring comfort to you.

A devastating loss for our community. I loved running into Charlie on the street. It always brightened my day. Once when asked about Sweet Pea, he told me, "It takes a big man to walk a little dog".
RIP big man.

That's a great saying. I know a guy in Stuy Town who's the same way - big, burly dude who walks a dog who probably weighs less than one of his feet!

Sad news. I had the pleasure of meeting both Charlie and Sweet Pea and they made my day. Sweet souls, both of them. RIP.

A heavy loss for those of us on E 5th. Little dogs never had it so good as on the end of his leash. Thank you Sally for all you've done. Peace and Love.

How lucky I have been to know someone that it can hurt so badly to say goodbye to. Charlie was my friend. We both came from Brooklyn and made the East Village our home. Charlie was a presence here in EV, 5th st in particular. Charlie was a people person [canines too ]and created a hub, he brought people together. Knowing he was close bye made me feel safe and I'm sure others felt the same. Charlie was an intelligent witty man with a great sense of humor. No one could make me laugh so hard. Charlie was indeed a one of a kind who touched so many. I loved my friend Charlie. His passing is heartbreaking, but the laughs and all we've shared will endure. My life has been enriched for knowing him. It has been a privilege. til we meet again. See you & sweet pea on the other side. Patricia

Charlie was one of the most vibrant, amazing souls I ever knew. He was an original, the king of the East Village, and one of the best storytellers in the world. When kids would ask why Swee' Pea's tongue was hanging out, he would tell them, "She lost her teeth because she didn't floss, so make sure you do." Heartbreaking to know that Charlie is gone, but he will always be so missed and loved. R.I.P. Mr. C Love, Grant

There is chalk outside his place if you want to leave some art and a board for comments. People really cared about Charlie! He was so special.

I am so devastated by this loss. I stopped by the memorial this evening and many friends, and strangers too, were reminiscing about him. Such a sad day for the east village. Running into him was always the height of my day. I don't know if it was the beating he took to his head from a homeless guy, depressoin, or something else but he was a great friend. I will miss him so much and I am so mad I could Kill him.

I have no words -- such a wonderful man

Grant Shaffer- Your sentiments in the above post sums Charlie up perfectly as I remember him. You introduced Charlie to help take care of Declan when we were neighbors on 7th Street. He was a warm, wonderful man. R.I.P.
Also, love to you Grant xo

RIP Charlie. Thanks for watching Moe for us.

Charlie was a childhood friend. I just learned about this. He had a great head on his shoulders. I'm stunned!

I grew up in the same building in Coney Island and was friendly with his brother. So sad to hear of his passing. He was very kind man!!

This is so sad to hear, I just found out from a friend from my old 5th Street days.

Charlie was a true NY character! I remember when I saw him walking around with Sweet Pea the first time, I thought "now this guy has got to be really interesting!". He walked my dog Zack and I always enjoyed running into him in the neighborhood.

He will be missed.

Missed this when it happened but wanted to say a tribute to lovely Charlie. We'll miss you.

I was a close friend of Charlie when he first moved to the village. We rode motorcycles together and worked together as well. Hope all is well with Charlie in the great beyond.

I don't know why but I needed to do a search for Charlie's name and this tribute came up. I was aware he passed but this page is a nice sendoff in his memory. He walked by dog Zack who Sweet Pea didn't like but Charlie was always a good steward of. He was always was bigger-than-life, physically as well as his character.