Chase space on 2nd Avenue and St. Mark's Place is for rent 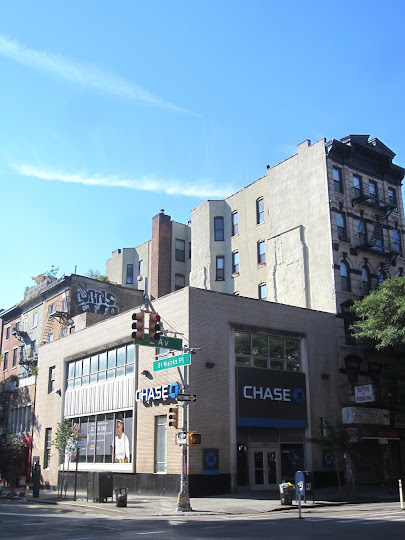 The retail space that is currently home to a Chase branch at 130 Second Ave. is on the market, available starting in January, according to a listing at Icon Realty.

Here are a few details from the listing:

130 2nd ave resides on St. Mark Place [sic] which is defined by a perpetual eclecticism born from an ever-evolving New York City and its mixing of the pop- and counter-culture movements. Dominated by pedestrians and boasting a lively, approachable and socialable sensibility.

-Prime East Village Corner Commercial Space on Second Avenue and St. Marks Place Accepting Offers for: General Retail Use, Restaurants/Bar, Office Space, Gyms/Fitness Centers
-New elevators will be installed and space will be delivered as a white box with a new all glass store front

Perhaps Chase figures they can do without this location… especially since there's another Chase branch two blocks to the north at East 10th Street.

And it appears that Chase is downsizing. There's a for rent sign above the Chase branch on Avenue A and East Second Street, as we noted last month. 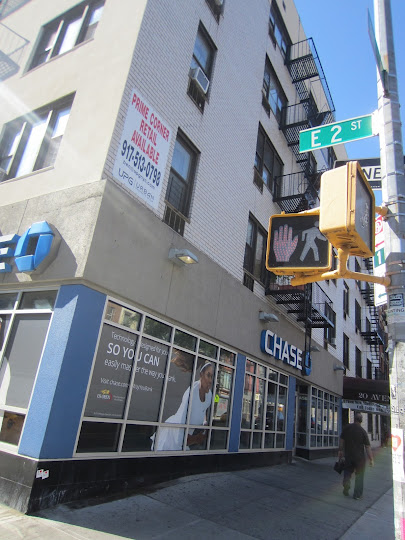 This space is also available starting in January, according to the listing.
Posted by Grieve at 4:30 AM

My guess a mini H&M. Chase bank locations will look homegrown, cozy and familiar after whatever replaces it opens.

Good riddance. Why did they need two branches within two blocks of each other on 2nd Ave.?

What's this? News to celebrate and not grieve?!?! Buh bye!

For the same reason Astor Place has 19 drug stores.

They didn't need two branches within two blocks of each other - that's why they are closing this one. Either this one, or the one up 2nd ave used to be a WaMu branch that became a Chase after the fallout from the financial crisis.

That is a classic building - architectural students, take note!

Man, I hope they open a TD Bank! That's the corporate bank for me!

@9:39's comment got me thinking: What bank does everyone here use as their primary bank? I'd love to see what a quick poll would come up with considering the general sentiment around banks.

I use Bank of America - literally the only reason I am still with them is because of their Museums on Us program.

Great location for a Catholic church.

this one used to be a WaMu and was converted during the crisis... there was never an intention to have two Chase branches so close. byproduct of the acquisition. I will walk past the Chase branch at 10th to get to this one, because the ppl are faaar friendlier behind the windows. The Chase on 10th employs some folks with bad attitudes.

Is it true than Gema's nail bar will open here

"...which is defined by a perpetual eclecticism born from an ever-evolving New York City and its mixing of the pop- and counter-culture movements. Dominated by pedestrians and boasting a lively, approachable and socialable sensibility."

Years ago, this was a Bankers' Federal Savings; I think this building has always housed a bank of some sort.

I use Chase but rarely need a branch. I have direct deposit, get money from ATMS and pay with my debit card.

Since when do they let drunken gibbons, no matter how "socialable" their "sensibility", write real estate jargon?

I use the Citi on Avenue A. I opened my account when it was an EAB because no other bank would have me. (There was Chemical and one other, I forget the name. These two were the major players back then.)

Before that, I used the check cashing places.

It really says something about the EV when even banks are getting priced out.

Anon 2:03 - Agreed, the food is terrible, and the portions are tiny!

I bet this stays empty for about 18 months.

For my bank I use Under My Mattress Savings and Loan, they offer no fee savings accounts and free cash withdrawals.

Who tf cares what people use as their banks. People were fine back then before there were bank branches in almost corner or block, and before 7-days/week service and ATMs. Ironic that after the financial crisis of 2007-2008 that more bank branches opened. That's Too Big to Fail for you.

Regardless, that's a perfect spot for a coffee shop or a "coffee shop" where they will serve "authentic" farm-to-table but lousy matzo balls, and over priced terrible food but portions are small, and the staffers are holier-tha-thou, esp. the baristas or mixologists who wear trilbies, yet people will flock it.

I'll buy it! I see a 30 story megalopolis in the works! And very soon. A few more gas leaks, and we'll clear out the entire block.

Too bad - his Chase was the nicer building with the competent staff, the one two blocks north is not.

I use TD because they're pet friendly. I've been using them since they were Commerce.

Out of all the Chase branches, this is the only one I use. The employees are really nice and there's hardly ever a wait. Maybe that's why it's being downsized.

@Gojira: It's an ICON listing - don't expect correct English, complete sentences, or any accuracy in describing the neighborhood. Why the f&ck does Icon get these listings? Who's stupid enough to list with them, other than themselves?

If anyone could demand truth in advertising, the listing really ought to say: Right up the street from where we "closed" Stage Restaurant and cut off heat/hot water to an entire building full of tenants. Also right across the avenue from where B&H can't reopen, and where 3 buildings exploded, killing 2 people, destroying affordable housing & displacing many good neighborhood people.

Was a baby furniture store before it was a bank.

"Years ago, this was a Bankers' Federal Savings" Thank you for reminding me. That's when I opened my account. Then it became the Dime Savings Bank...then Washington Mutual and finally Chase. I might have missed a few, feel free to clue me in.

"Out of all the Chase branches, this is the only one I use. " The people working there are very nice and always knew my name. I wish them the best of luck. Now I need to know where they're going to transfer my account. I have direct deposit of my SSI.

All banks are pet friendly.

Why is no one commenting on the "new all white glass storefront" part?

I understand what you are saying about keeping your cash money safe in shoes and mattresses. I did that loads of times, after getting money from the check cashing service.

But I understood I had to pay NYNEX and others for my bills with a check, and needed a checking account. I used to and would go and pay cash in person.

I also was intrigued about putting a little in savings.

Ah,fond memories of Second Ave Deli which now has 2 locations, neither of which is on Second Ave

That BofA museum program - guess how that gets paid for? Through the high fees they charge.

the staff in there have always been very courteous and nice to me. I hope they're not gonna lose their jobs.

@1:22 - Despite having an account with this for 7+ years, I have never paid a fee to BofA. Just don't be stupid with your money.

We are frequent customers at the Chase on 10th and 2nd Ave. Happy to see it is not closing. The staff is dog friendly. We can use the ATM anytime, but prefer to visit the tellers whenever possible as we now consider them friends and a part of our community. There are rumors of further employee downsizing which will save Chase on salary costs and have us all using the ATMs. If you want to ensure that doesn't happen on 10th and 2nd Ave, let the corp powers that be at Chase know that you want to keep people and not just machines working in our branch!

What does it say about the current state of affairs in the EV when banks can't afford the rent?

Icon and Stellar Realty, who own 128 Second Ave next door, will build a new larger building on the corner of St. Mark's and Second. How high can they go? Can they tear down 128 and incorporate it into the new one? Is the Orpheum Theater safe?