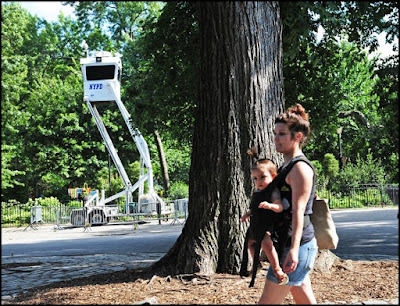 Protest the NYPD "sniper tower" in Tompkins Square Park 1988 with a weekend long campout to celebrate the 27 years since the bloody NYPD riot that injured hundreds of innocent and unawares local citizens in our neighborhood. The arrogance of the NYPD was never greater since the recent erection of the "sniper" tower outfitted with cameras and recording equipment.

A clear and blatant violation to first and fourth amendments rights to public assembly, free speech and privacy. Bring a tent, some water and noise makers. Support the right of homeless people to enjoy a public park. It's real estate maggots like Jared Kushner who are destroying our community. Let's show him it won't come easy.

The sleepover is planned Aug. 7-9.

Some clarification in the comments from John Penley:

I was asked to come back to help with this so I am. First of all the camp will be called Camp New York Post and people will not be sleeping inside the park and being arrested we will sleep on 7th street outside the park and there will be no fires just free food and cold non-alcoholic drinks. We also will not block the sidewalk. The point I want to make is that the reason for doing this is not just the tower it is because we believe the NY Post used the sad plight of homeless people to create a return to Giuliani style policing in relation to the poor and those suffering from poverty, mental illness and gentrification and we do not want that to continue

[Updated] NYPD patrol tower arrives on Avenue D
Posted by Grieve at 4:25 AM

Do you have a permit for this? If not, you'll be arrested. What's the point? Just make the tower into an art project, or a religious icon, or something Druid

The real question here is what does Fashion by He think about all this? Hopefully he's pleased so he can go to his important work, which, apparently, is shaming women because they have cellulite.

a fire barrel for warmth? on Aug 7th?

Yea, tell them you're coming, that's the way to do it. Do we have to register on a website? Do you need our cell phone numbers?

I hate this fucking tower. I've never gotten arrested and I'm a good citizen, but I fucking hate sitting on the bench and seeing it "watch" me. It shouldn't be here.

Glad someone's doing something at least

"The arrogance of the NYPD was never greater since ..."

Are you fucking kidding me? Where have you been?

The point of this, like so many other limp-wristed attempts at "protest" is for the feckless to grant themselves the patina of power in what amounts to little more than bad political theatre. I sympathize because I know these histrionics generally grow out of a compensation to the knowledge of one's own insignificance and lack of real power.

Same here. Same as it ever was. Same as it will ever be. If you think the installation of this tower is the most egregious offense and that your precious rights are being trampled upon, going to sleep in the park isn't going to induce anyone to change their minds whilst you're all snoring and sweating over one another. Perhaps these kinds of tantrums worked with your absentee parents but the men with the guns aren't cowed by your sanctimonious indignation.

Unless, of course, you think some hot poli-sci chicks in short shorts will show up, then count me. I'll be the tall handsome dude in the Che shirt rockin' the extra large mala beads carrying a copy of Lobaczewski's "Political Ponerology". Oh, and fuck the police.

It'll be gone in a few days, and not because of protests. Relax.

"The arrogance of the NYPD was never greater since the recent erection of the . . ." makes little sense. That and the "firebarrel" nonsense. And how are people supposed to sleep with "noisemakers" going off? Won't that be something else for neighbors to complain about?

Whenever I see some announcement of a protest in which participants are urged to bring "noisemakers," it signals to me that it might be organized by "covert ops" working for Them. The Facebook page looks like an incitement to RE-CREATE the TSP riots of yesteryear. The surveillance tower is nothing but provocative - because it's provocation.

Prediction: Crowd will assemble and be incited to topple the tower; officers within will be hurt or worse; NYPD will come bust heads and worse; "cleaning-up" the Park and more opporessive measures to regulate who gets to use the Park will be justified by the miscreance of assembled public.

Prediction: it'll be a snore. If anything, the few vagabonds without any real skin in the game and who are just looking for any pretense to do something stupid, will, and they'll be weeded out quickly. The rest of the hipsters will sit around quietly playing mahjong and sudoku and will eventually go home aglow with street cred and numerous Facebook selfies to prove it. At least that's what Zoltar is saying.

What about a more organized letter-writing campaign to the mayor's office and other related public servants? Something that can be organized by weekly meetings, perhaps held in the basement of the Tompkins Library? I would offer my services to organize such a thing if there was any positive response to this. A petition is one thing, but a group of people living here who all wrote letters I think has more power, especially if we could get some media attention or some of our more famous or accomplished to come out in opposition to this. Hell, maybe even getting people IN TOMPKINS to do quick videos on YouTube of why they HATE THEIR PRIVACY BEING INVADED would also be helpful.

SEE YOU THERE! WE LOVE A GOOD PARTAY!

Agreed that a more organized letter writing campaign is infinitely superior to some ethereal online petition, but to put an even finer point on it, an organized letter writing campaign with pitchforks would be greater still. The fact is that this hubbub is just a symptom -- if you really hate your privacy being invaded you're going to stop having to use your iPhones, and stop buying things over the Internet, stop buying your flat screen TVs with built in microphones that listen to whatever you say, stop using Facebook and uploading every stupid fucking picture of you and your cat, and on and on. It's not just about some NYPD Eye in the Sky in the park. And while you're at it, stop voting, stop giving ideological support to murderous allies that for some reason are given access to all of your private information, and, eventually, withdraw your currency and prepare to suffer for a bit. That is, if you really, really want your privacy back. Frankly, I think this is a lost cause. You'd have to contend with a whole generation of know-nothings that have been raised from the cradle sharing every insignificant mote of information about their private lives with a computer screen. Good luck.

Sounds like a plan. Gather the homeless, start some fires and yell at the police. What could possibly go wrong ?

I really think it is money talking to assuage the fears of the outsider newcomers to NYC and the EV.

Good points, 12:06. I agreed wholeheartedly, which is why I don't own a "smart" phone (or any GPS-enabled device); I have a 20-year-old TV; I don't shop online; I use cash all the time (too much credit card theft); and I'm rarely if ever on FB. My identifying photo (of which there is only one) is already ten years old. I don't plan on helping out big Brother NYPD one fucking bit, I rather like being UNKNOWN, my whereabouts UNKNOWN, my spending habits UNKNOWN, etc. Thinking people did not sell themselves out for a little technology...some of us are wiser than that. BUT THIS IS PRECISELY WHY I OPPOSE THIS FUCKING TOWER...I didn't drink the Kool-Aid. And if I want to sun myself, or heaven forbid take a nap on the Tompkins grass or read a questionable book or whatever, I WANT PRIVACY FROM THE NYPD TO DO THAT. Privacy in general in NYC is what it is. I'd old, fat, and ugly, so no worries about being ignored in that respect, but at the same time, the tower makes me uncomfortable and I SHOULD NOT HAVE TO FEEL THAT WAY IN THE PARK just because some parents are concerned about explaining some of the harsher sides of life to their impressionable kids. WHY DID THEY MOVE HERE? Tompkins is not Madison Park, it is not Gramercy Park (what a waste!), nor is it Union Square. TAKE YOUR AGENDA ELSEWHERE NY POST...Murdoch, Kushner, Icon, ALL OF THEM WITCHES!

I was asked to come back to help with this so I am. First of all the camp will be called Camp New York Post and people will not be sleeping inside the park and being arrested we will sleep on 7th street outside the park and there will be no fires just free food and cold non-alcoholic drinks. We also will not block the sidewalk. The point I want to make is that the reason for doing this is not just the tower it is because we believe the NY Post used the sad plight of homeless people to create a return to Giuliani style policing in relation to the poor and those suffering from poverty, mental illness and gentrification and we do not want that to continue

Why don't you want to print my comment about Daniel Rakowitz? Do you want to support the delusion that the Park was great in 1988?

Wearcyour Santa suits so that the NYPD won't bother you.

How about a protest outside city hall or DHS headquartets? Protest shelter conditions. Many homeless sleep in parks and on subways because the shelters are violent and chaotic. That is what is needed. This protest is stupid. The bigger issue isnt a return to 'Guiliani style policing'- its Bloomberg shutting down drop in centers, gutting the voucher programs etc. These are things DiBlasio should be changing. That would do far more than this lame protest. Sorry.