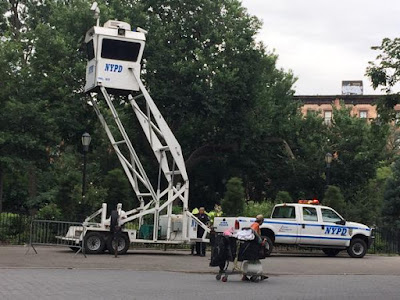 The patrol tower that the NYPD installed in the middle of Tompkins Square Park on Tuesday has prompted plenty of discussion. (Our post has 135 comments and counting.)

Yesterday, East Village resident Penny Rand, who has lived in the neighborhood since 1968, launched an online petition asking Mayor de Blasio to remove the tower.

There is no crime happening in the park that cannot be handled by foot police or officers in patrol cars. The precinct is just around the corner, patrol cars find their way into the park on a moment's notice.

Take down the tower. We don't want it. It makes us feel violated, insulted and angry that you chose this path under the guise of protecting us.

Take down the tower. We don't need it. It is overkill and just a display of muscle that infringes on our enjoyment of the park.

Take down the tower, Mr. Mayor. Take it down. Today.

The goal is 1,000 signatures by end of the month. Find the petition here.

Meanwhile, Gothamist talked to people in the Park yesterday about the tower.

"It's stupid, it's a waste of money," Annick de Lorme told us as she walked her dog past the tower last night. "It doesn't make sense to have two police officers sit around."

De Lorme said that she has lived next to the park on East 7th Street for 13 years, and felt that Tompkins is "one hundred percent" safer than it was when she first moved to the neighborhood.

Gothamist also gets an explanation from the city.

Mayor de Blasio's press secretary, Karen Hinton, told us that the Tompkins Skywatch "is a temporary 'high visibility' police command post to address safety issues on a temporary basis," and that "how long it stays is up to the Boro Commander."

Hinton said that the "NYPD tried to park the Skywatch in the street area, away from the park, but that was problematic. The park was the next best solution."

"how long it stays is up to the Boro Commander."

I think it's time to call the Boro Commander. Anyone have a name and number?

Exactly. Just put those cops on the beat. Amazing that these things exist and are purchased, for what? Seeing a half block away?

Tried reading petition in entirety and gave up. The author should thank your editing for this post which made the petition terse, to the point and not a rambling diatribe. (shades of Unabomber Manifesto)

This tower BS is SUCH A DOUBLE STANDARD...i.e., if you're wealthy and resting in a park, you're 'sunbathing"; if you're poor or homeless, you're a blight on the landscape. For instance, CHAISE LOUNGES ARE PART OF THE PUBLIC PARK ON THE HIGHLINE WHERE PEOPLE RELAX AND RECLINE FOR HOURS EVERYDAY, but that's okay, right, while a few unwanted homeless folks lounging in Tompkins requires the constant observation and intimidation of a watch tower? They'd NEVER go for this on the west side, though it was okay when there were repeated reports of public nakedness and sex in the windows of the Standard Hotel overlooking the Highline. So basically, any criminal behavior is permitted as long as you're well-heeled financially and "easy on the eyes" while just fucking sleeping is a crime if you happen to be homeless in the same space. Can I go and poke every non-homeless person sleeping in Tompkins and tell them to move it along? WHY IS THE POST DICTATING HOW WE ARE POLICING OUR NEIGHBORHOODS? WHY IS THE NYPD GIVING CREDENCE TO THIS PRESSURE FROM THE MONIED REAL ESTATE INTERESTS? WE ARE NO LONGER STUPID. WE'VE WITNESSED WHAT BLOOMBERG DID TO OUR CITY. NOT EVERY PARK NEEDS TO BE PRIVATIZED (NONE SHOULD BE, IN MY OPINION) AND WE WILL NOT PUT UP WITH THIS AGENDA TO SELL OUT OUR PARK.

Maybe the tower cops can do something about the out-of-control Jazz Band Situation. They are next to the playground practically every day and kids can hear everything. How can you explain that to a child?

what a bunch of fcking babies...they try and clean up the park and now you are going to complain how they do it...find a new hobby idiots

NYPD needs to show why it needs another 1300 officers on the backs on taxpayers.

Easy there, Fashion by Meh. Please go back to taking your creepy photos of women from behind and mocking them.

Hey, 8:59, non-fashion expert, you are clearly not an expert on policing either, and apparently have been in NYC for a short time. TOMPKINS SQUARE PARK IS SAFE; we do not need a tower. INVADING OUR PRIVACY does not equal "cleaning up the park." This is an obvious attempt at "cleansing" the park of unsightly people to make the rich more "comfortable" about paying market rate. I say, pay your millions for your crap glass condos: After a while, between the rising tides brought on by climate change, our growing police state problems, and the fact that NYC has become a giant antiseptic mall, the PRICES WILL FALL BECAUSE THE LOCAL COLOR THAT EVERYONE MOVED HERE FOR (and apparently take selfies of) will be LONG GONE. There will be no cute unusual shops, no old-fashioned diners, no indie book or music shops, just chain stores, chain banks, and a bunch of people looking into their screens and not caring about each other. ALSO: JUDGING FROM ALL THE TIT SHOTS ON YOUR BLOG, YOU ARE SOMEONE WHO EXPLOITS WOMEN, but that's okay I guess, since you're not an expert at it, just an amateur. What was it that upset you about my comment? I guess you're just saddened by the decrease in PDA from the Standard and wish there was something like that in Tompkins. I bet you'd like a spot in that tower for a while, probably with a ZOOM LENS!

FASHION BY MEH this is not a troll shelter.

Dear Fashion By He,

Some people may like folk music, while the sound of that drives someone else insane.

So there isn't any need to call someone a 'fcking' baby if their tastes or beliefs do not match your own.

Perhaps you could find a new hobby as well. Maybe study the Dalai Lama.

If anyone needed a poster-boy for what's wrong with the East Village, Fashions By He is it: http://www.dailydot.com/society/fashion-by-he-fashion-blog-body-shaming/

Have I left out any other self-absorbed, entitled, zero empathy, transient troll rube lines?

Shorter Fashions By He: "Look at me! Look at me!"

A certain "journalist" who is an Indian Rachel Dolezal and writes for Bland + Boredom should do an exposé on Fashion By Huh instead.

Huh. That's exactly where that tower was prior to being moved to the park. It was there due to a previous shooting. Time to move it back.

Instead of the spy tower with TWO cops sitting in a cop car parked next to it 24/7 texting + web surfing, why not have the two cops simply WALK AROUND THE PARK????

Not only would they be doing something more useful, they would be getting some fresh air and exercise....

Heck, put them both on a couple of $300 bicycles and they could cover the entire park and an additional 3 block radius.

"high visibility' police command post" = not a perch with a broad vantage, but rather, a highly-conspicuous tool of intimidation.

Do the Authorities no longer have a sense of their being part of a social dymanic, rather than "above" it, figuratively and literally?

I'm for the police tower, perhaps we will finally get news of "Sugar."

"why not have the two cops simply WALK AROUND THE PARK????"

And then you proceeded to answer your own question:

"Not only would they be doing something more useful, they would be getting some fresh air and exercise."

They'd wind up applying for disability in about a week, I think.

Maybe the tower cops can do something about the out-of-control Jazz Band Situation. They are next to the playground practically every day and kids can hear everything. How can you explain that to a child?

I know; it's so embarrassing.

Shouldn't he be called Commentary By Meh since he doesn't actually create anything? He's a troll not a designer.

This is not about keeping anybody safe. I bet you this wasnt initially even a police idea. This is the surveillance industrial complex; capitalism at it's worse. Prey on a fear, a prejudice and create a need for a non existant problem. All paid by the taxpayer. I hope Diblasio listens

I think if they painted the tower a different color, a nice shade of green for example, it would fit in better, and fewer people would oppose it.