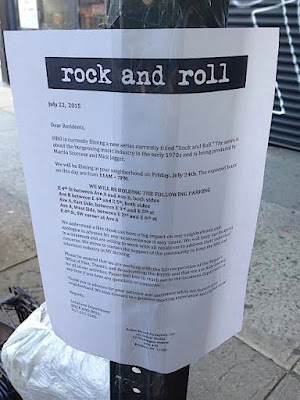 Crews will be out today in parts of the neighborhood filming the new HBO series "Rock and Roll," which Martin Scorsese and Mick Jagger are producing.

Filming will be taking place between 11 a.m. and 7 p.m. on parts of Avenue A (between East Third and East Fifth streets) and along Avenue B and East Fourth Street and wherever else the kinda blurry photo says.

According to Entertainment Weekly, the show is "set in 1970s New York, as punk and disco are emerging onto the drug-hazed, sex-crazed music scene, and record executive Richie Finestra (Bobby Cannavale) is trying to revitalize his label." The cast includes Olivia Wilde, Birgitte Hjort Sørensen and Mick's son James Jagger.

Sorry for that headline, BTW!

Oh...if only I could stick a knife in my heart.

Unfortunately, the film truck crews
were none too respectful of
their neighborhood surroundings.
At the end of the day they totaled our awning at
172 East 4th Street(Ageloff Towers)as their film truck pulled out.
Hope HBO makes good on this quickly.