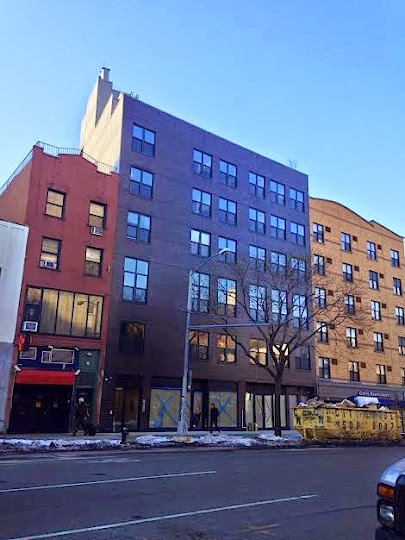 [EVG file photo of the FRONT of the building]

The new owner is real-estate investor Sunny Yung, who owns a handful of properties via his Central Management Corp.

As The Real Deal notes, Shaoul bought the property for $5.6 million in 2011. He then added three floors to the existing building to make it an unrecognizable, 1970s-student-housing-inspired rental with 20 units. 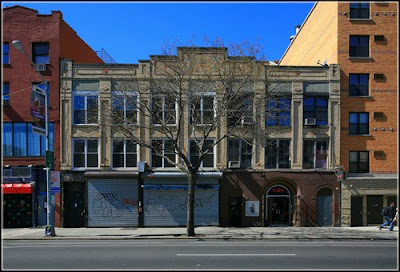 [Photo from 2009 by LuciaM via Panoramio]

According to Streeteasy, the average price of a rental here is $5,142. As previously noted, a Petco Unleashed is taking the building's retail space.

Shaoul's former rooftop-raging 62 Bloom on Avenue B is on the market for $80 million.

More about The East Luxe, Ben Shaoul's new 20-unit rental on 2nd Avenue
Posted by Grieve at 10:00 AM

I don't know how much he spent to renovate, but, wow, that'll be an amazing deal if it sells anywhere close to that. Have to respect his business acumen. Stripping the character out of the real estate from an architectural standpoint, well, that's another story.

We are the Borg. You have been assimilated.

Make it gross, flip it and run. NO CONSCIENCE, JUST GREEEEEEEEEED. His ethics are like his initials, just BS.

Now it's always sunny and young in EV.

A HEFTY flip tax/surcharge in the area of 50-80% would help curb speculation that leads to hyper-gentrification, as would REFUSING to rezone existing structures and blocks to allow for high-density housing, but the city (Giuliani-Bloomberg-DeBlasio) is clearly NOT interested in stopping this shit....

This is all just a shell game to these bastards.

The person who bought from Shaoul must be a complete idiot. Why overpay for this property, which the new owner certainly did.

Shaoul must be laughing all the way to his bank vault.

I can't wait for the entire real estate scene in NYC to implode - retail, market-rate residential, condos, the whole ball of wax.

that was a good-looking building! how come no one makes attractive add-ons/renovations? seems like you could still make plenty of money without making it look like a prison.

Now subtract all the costs a building has: real estate taxes, insurance, water & sewer, janitor or super, common-area electric bills, cost of heat/hot water (unless Shaoul renovated so that each unit pays their own on that), repairs, etc.

Net income is not going to be very high. I don't see where the return on investment comes from in this situation, I just don't, even with depreciating the building each year on the owner's taxes.

Maybe somebody smarter than me can explain to me why this particular building is a good purchase/investment at $29 million.

I can't wait for the entire real estate scene in NYC to implode - retail, market-rate residential, condos, the whole ball of wax.

And it will; what goes around, comes around.

@10:30 PM - The net income is probably more like $1.4MM. That's a pretty secure near 5% annual return on investment. Remember, you also have to look at future value. Rents will rise, real estate value will rise. I don't think he's getting a steal, but he's not getting ripped off.

@9:16am: Thanks! But (having been involved running a bldg in E. Village for several decades now) I don't see how his NET INCOME would be about $1.4 million/year. Can you clarify?

5% annual return is good right now, but perhaps not so good in the future (presuming this is a long-term purchase). If buyer paid all cash, he's tied up a LOT of $$, so there's an opportunity cost.

And yes, rents going up - but so also are the RE taxes, water & sewer, insurance, etc.

Yes, this is a lot of cash to tie up, but you have to put it somewhere. As much as anyone wants to talk about a real estate bubble, etc, the writing is on the wall - there's a lot of money to be made in the East Village.