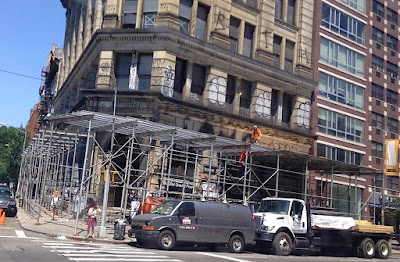 Workers continue to erect the heavy duty sidewalk bridge at 190 Bowery, where developer Aby Rosen is converting the former single-family home into office space and maybe some high-end condos.

BoweryBoogie first spotted the scaffolding going up late last week, and not much progress has been made since then, it appears.

So what's going to happen outside here at Spring Street? As Curbed reported, the plans approved by the Landmarks Preservation Commission back in May call for keeping the graffiti on the exterior. Plus! "The exterior will have entrances restored to their original 1898 state, and all of the windows will be replaced."

And as for the interior of the Germania Bank Building, a company made up of agencies representing creative professionals had previously reported signing on for some of the office space.

Rosen bought the landmarked building from photographer Jay Maisel for a reported $55 million last year. And no — it's not for sale again.
Posted by Grieve at 1:10 PM

It's ridiculous that they will keep the graffitti on the building.

It's beautiful that they will keep the graffiti on the building.

It's ridiculous that people will do to put graffitti on the building.

Don't confuse the activities of animals marking territory with art.