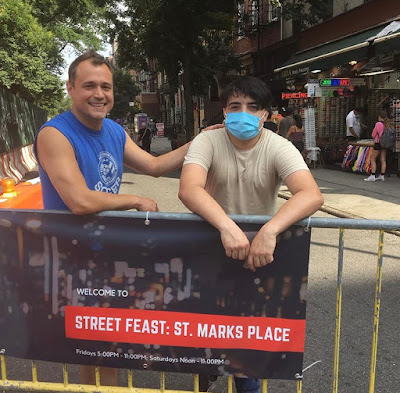 As you may have seen, Mayor de Blasio yesterday extended the Open Restaurants program until the end of October, giving NYC restaurants two extra months to serve sidewalk and curbside meals.

Also! The mayor announced that the city was providing a weekend expansion for outdoor dining options — a combo of Open Streets and Open Restaurants.

Per the city's release:

The program expands restaurant seating options onto car-free streets for select corridors throughout the five boroughs. Restaurants on these corridors will go farther away from the curb than other Open Restaurants participants, and the rest of the streets will be open to pedestrian traffic and emergency vehicles. Selected corridors will be operational on Friday from 5-11 P.M., and Saturday and Sunday from noon to 11 P.M. The 26 new locations bring the citywide total to 47 participating streets.

And around here, the new street dining — weekends only — will happen on:

As the top photo shows, the outdoor dining on St. Mark's Place already has branding — Street Feast.
Posted by Grieve at 8:21 AM

This makes it seem as though restaurants will not be opening for inside service until at least November.

Closing avenue B between 2nd and 3rd Street is a public safety issue for the Fire Department. The station on 2nd street between B and C uses avenue B for any calls that are north of second street. They specifically use that route to access any calls to the Jacob Riis houses along avenue D. According to the Battalion Chief this accounts for 100's of calls a month. I know they can stop and move the barriers, but this adds time to their trips and unfortunately could mean someones life. This is the reason Avenue B was only closed from 6th street to 14th street. This was discussed at the Community Board Transportation Committee meeting on Tuesday night, you can watch the recording on the Community Board Website.

Guess who's having 'Cuomo Chips' today!

This is wonderful and needs to stay in place at least until indoor dining is allowed. It also needs to be back in April. The absurdity of the broken process where a food establishment needed to go in front of Community Board transportation committee in order to request, justify and get approval in order to designate a parking spot as an outdoor dining area is exposed and brought into light. Abolish this broken process and let businesses thrive.

Choresh, there seems to be some confusion. Restaurants are not required to go in front of the Community Board to use the parking lane. The issue in front of the Community Board Transportation Committee was the closure of Ave. B between 6th and 10th street. The fire department came to the committee to discuss their concerns about the closure of that section. At the meeting they were unaware that the section between 2nd and 3rd was going to be closed but that section is even more relevant to them, because it is immediately adjacent to the fire station.

Way before COVID-19 when a business owners wanted to convert a parking spot in front of it to be utilized as outdoor dining area they had to go in front of the CB and get an approval and then get a permit from DOT. There is no indication that the city will change this terrible process.

Really annoying that the city did this without community board approval. They let some of the worst boozy brunch bullshit spots take over our streets.

LPIFLY - LOL, because it's a street, it's how we get around and move items around. It's pretty vital to a city and connects everything.