A memorial for Fahim Saleh on East Houston Street 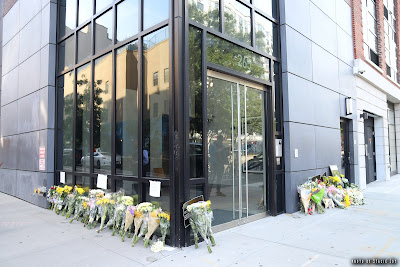 A makeshift memorial with multiple bouquets of flowers grows outside 265 E. Houston St., where the stabbed and dismembered body of Fahim Saleh, 33, was found last Tuesday in his seventh-floor residence here at Suffolk Street... 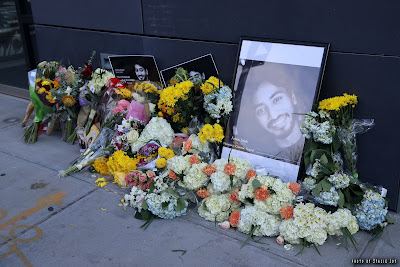 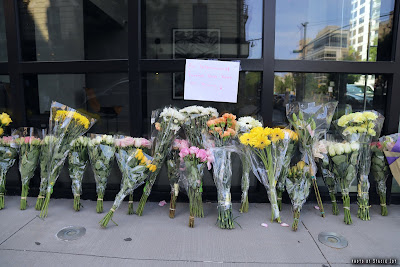 On Friday, Saleh's former assistant, Tyrese Devon Haspil, 21, was arrested and charged with the murder. As The New York Times reported: "Some investigators theorized that the suspect had tried to make the killing look like a professional assassination to divert attention from himself."

Yesterday, Legal Aid Society attorneys with the Homicide Defense Task Force who are representing Haspil said he has pleaded not guilty to second-degree murder. Per CNN:

"We are in the very earliest stages of ferreting out the truth. The life of this case promises to be long and complex. As the attorneys for Mr. Haspil, we urge the public to keep an open mind."

An aunt told the Daily News this past weekend that Haspil "was a quiet young man, at times annoying, but incapable of the cold-blooded murder."

Haspil allegedly killed his boss after getting caught embezzling more than $90,000 from him. Saleh had said he would not call the police if Haspil paid the money back in installments, according to published reports.

During the arraignment, Manhattan assistant district attorney Linda Ford said that they have overwhelming video evidence against Haspil, including surveillance video showing him at a Home Depot purchasing the saw and cleaning supplies.

His next court appearance is scheduled for Aug. 17.

Among other endeavors, Saleh was the CEO of Gokada, a motorbike ride-hail company in Nigeria. He was born in Saudi Arabia to Bangladeshi parents and was raised in upstate New York.

"The headlines talk about a crime we still cannot fathom. Fahim is more than what you are reading. He is so much more. His brilliant and innovative mind took everyone who was a part of his world on a journey and he made sure never to leave anyone behind."

I walked by here tonight and none of this stuff was here. So strange. I hope the building didn't have it removed.

How is that not a first degree murder? It's seemingly premeditated.

First-degree murder is weird in New York State. If the victim is a cop, it's first-degree (or an ambulance driver, or some other specified category), or if you're a hired assassin, or a few other things. But most pre-mediated killings would be second degree. The penalties are the same for first and second.