A Visit to Odessa Restaurant 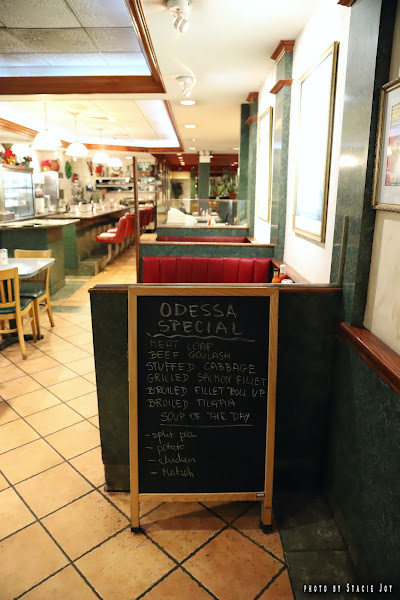 When Dennis Vassilatos and I set a date and time for me to interview him and take pictures at Odessa Restaurant, 119 Avenue A between Seventh Street and St. Mark's Place, the nighttime manager figures that after 9 on a chilly Tuesday will work. He expected this to be a quiet time, which would give him a chance to talk for a few minutes.

However, when I arrive, the phone keeps ringing, the fax machine keeps spewing out orders, and the Seamless app tablet pings on the regular.

I listen as customers phone in specific orders: two Odessa burgers delivered, must be well-done, with extra ketchup. This person calls back to remind Dennis that they need extra ketchup. There's a Turkey Club to stay, plus a newspaper to pass the time. Dennis searches behind the counter for suitable reading material. One order of mashed potatoes with brown gravy and a side of broccoli to go, which Dennis wraps up with a smile. 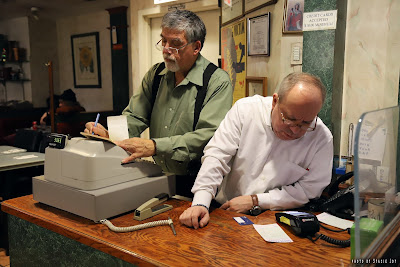 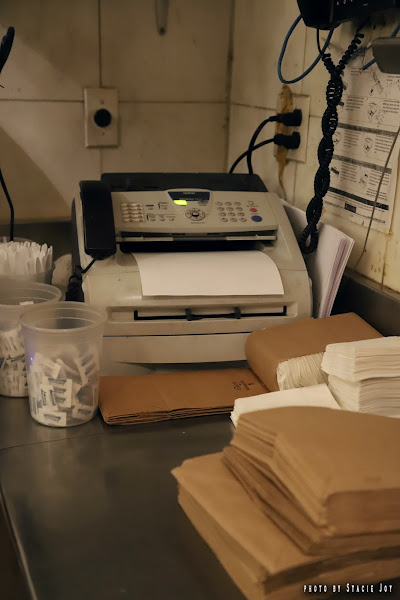 Dennis, 64, loves the neighborhood and speaks with appreciation about his customers, saying he’s never had an argument, that he can “get along with the stones.” He likes his regulars especially. “They order the same food each time and value consistency.” 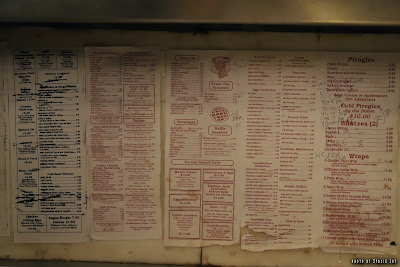 Dennis thinks of them like family. “The guys in the kitchen, they already know what to make when they see a regular coming. Makes things easy! The new, young people mostly come in on the weekend... They are not demanding and pretty easy-going with minimal problems.” 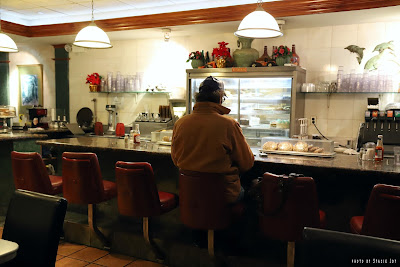 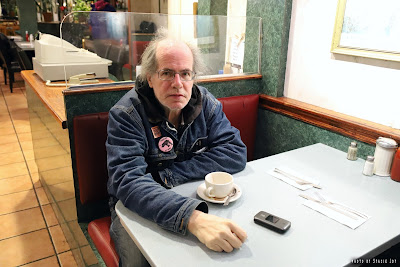 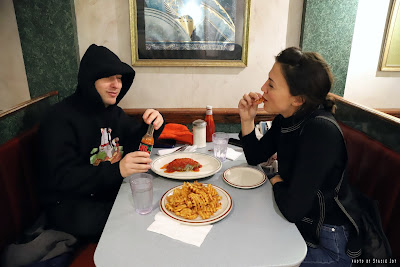 After one more order comes in — waffle fries with hot sauce — Dennis has a moment to talk about his time at Odessa, an Avenue A mainstay since the 1960s. 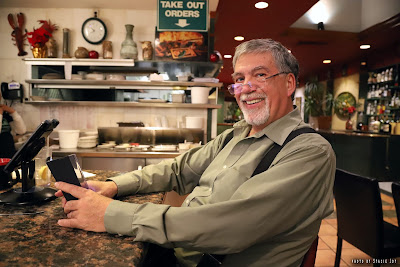 How long have you worked here?

How did you come to work at Odessa?

I came to America almost 45 years ago, in 1976. I was born on a Greek island called Kefalonia, and I had been studying economics, but when I took the college tests I scored only good enough to become a bookkeeper.

I came here on an F1 visa and studied at the New York Institute of Technology for three and a half years ... but I needed money so I answered an ad in a Greek newspaper for a summer job, and never went back to school. I worked as a manager in a West Village restaurant called Tiffany, which is now a bank. Then another place uptown before coming here to Odessa. Been here ever since.

I work nights, so I am not sure I’d be called a manager. Managers are daytime people, to make orders for food and supplies. Daytime stuff. But I assume all the responsibilities of a manager.

How long has the “new” Odessa been open?

When did the first Odessa open next door? (The original location closed in August 2013.)

What is the most-popular item or items on the menu? 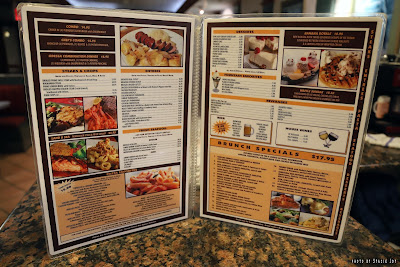 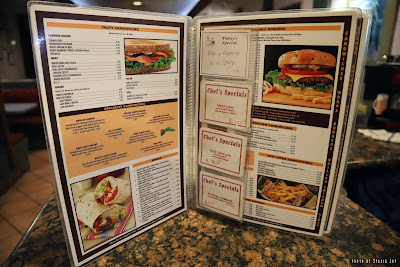 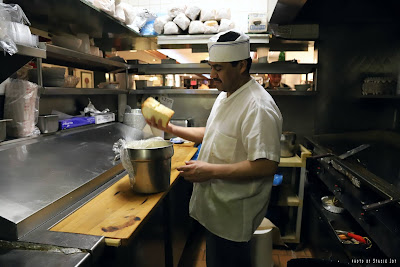 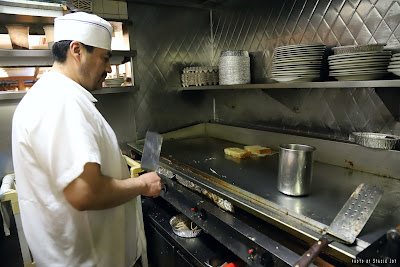 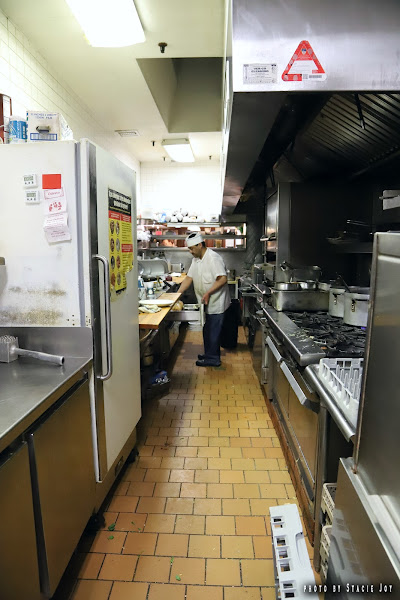 Do you have any archival photos of Odessa somewhere in an office or drawer?

No! I wish I did. Back then people didn’t carry cameras everywhere. I am always asking customers if they have photos but no one ever does. I would like to see them. 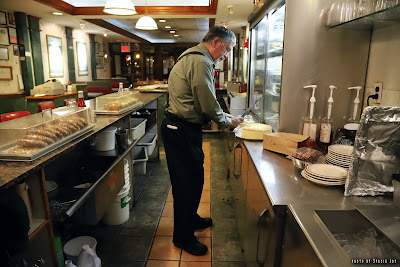 Email ThisBlogThis!Share to TwitterShare to FacebookShare to Pinterest
Labels: A visit to, Odessa, Stacie Joy, the Odessa

I came to nyc in the late 70s and Odessa was a fav place of the early punk crowd for late-night pierogues and potato pancakes. it was exciting because avenue A was still kind of dicey back then. I'm amazed and very grateful that it's still there, best of luck to them.

Dennis! I remember his first day! Had dinner there many nights for his first decade. The quality of the food went sideways around Obama (thanks Obama) but Dennis is still a champion. This post is effective advertising as I'm now going in soon to drink late night coffee like it's 1999. He and Ray are Avenue A.

Proud regular for 11 years, which feels like a long time but isn't, all things considered. When Odessa goes, so goes the city, IMHO.

Thank God they're still here. Thank you and brava, Stacie Joy! (This series feels like Mr. Rogers's Who Are The People in Your Neighborhood? in the best way.)

Great photos of a cherished place and beloved people.

I’ve spent many a Thanksgiving there and any old time. Usually pretty quiet. Dennis is a terrific guy. Always in a good mood and gave me a big hello. Its great to see him recognized.

Went to Odessa many nights a week for years. Dennis would hold court at the last stool at the counter, next to where I sat, and show me funny videos he'd find on his phone. His laughter was infectious and his smile as big as the Parthenon.

Like Odessa, he will be sorely missed, and I wish him a very happy retirement in Greece. He deserves every day of sunshine coming his way.

Great article and what a beautiful smile . I got lunch delivery Friday because I wanted to find out what is going to happen w. Odessas and my concern about delivery people and say good by since I wont be able to go by..... the person who came is new and yes, from Oaxaca. He said they are closing for 2 months, I said are you sure, maybe they are telling you this because they dont know how to let you go. He smiled behind his mask and said, "no se Sra. esperemos que si abren otraves" he doesnt know and hopes they open back. Me too.