94-96 Avenue A wrapped ahead of 1-floor extension 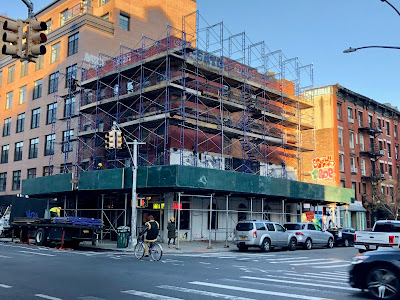 Workers spent parts of this past Thursday, Friday and Saturday erecting a sidewalk bridge and scaffolding around the building on the northeast corner of Avenue A and Sixth Street.

As we reported last May, the newish owner of 94-96 Avenue A filed plans with the city for a one-floor extension at the building that previously housed Sidewalk Bar and Restaurant.

• The building housing the former Sidewalk sells on Avenue A

• New owners set to take over the 33-year-old Sidewalk Bar & Restaurant on Avenue A
Posted by Grieve at 4:30 AM

How many rent stabilized apts are lost?

Wow that’s probably not going to be good for August Laura.

With a awesome view of a Con Ed substation

Half the city is covered with scaffolding, its outrageous. It is a tax to the rentiers we all have to pay.