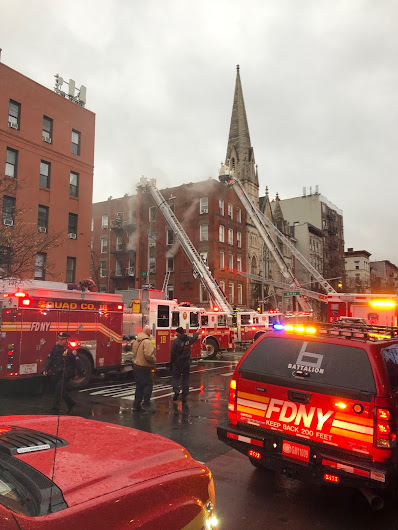 The FDNY is responding to a report of a multiple-dwelling fire on the southeast corner of Second Avenue and Seventh Street... 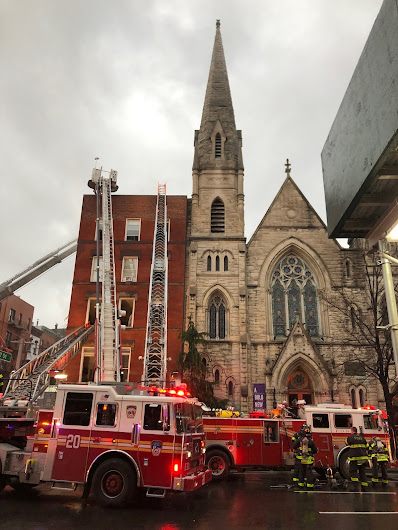 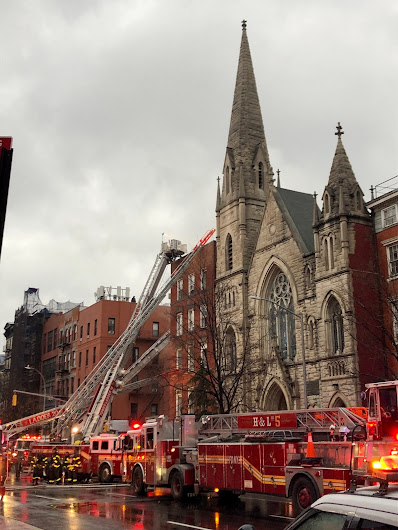 The first report came in at 4 p.m. ... the FDNY has since upgraded this to a three-alarm fire. The addresses are 48 Seventh St. and 116 Second Ave. The ground-floor retail tenants are Via Della Pace on Seventh Street and Café Mocha on the corner.

No word of any injuries at the moment. 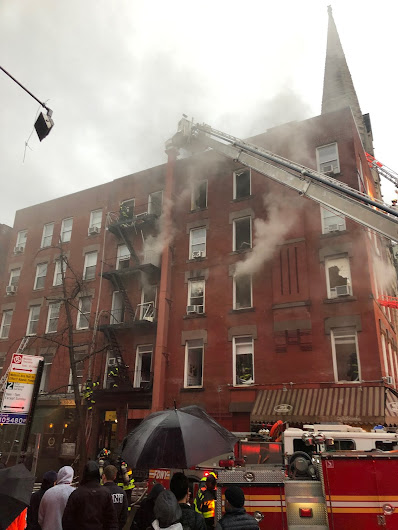 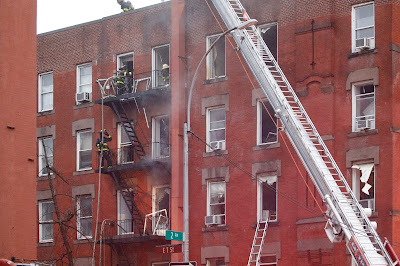 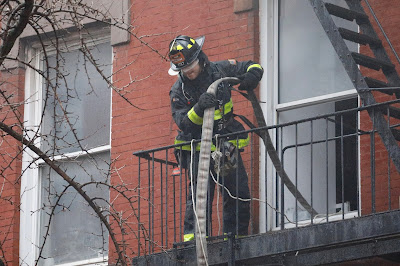 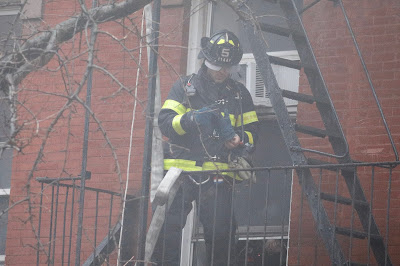 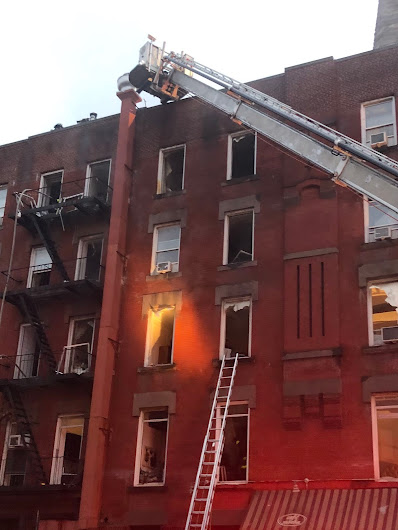 And a video clip from a Citizen user...

The FDNY has yet to issue an all clear... you can see the extent of the damage to the corner building... (photos by Steven)... 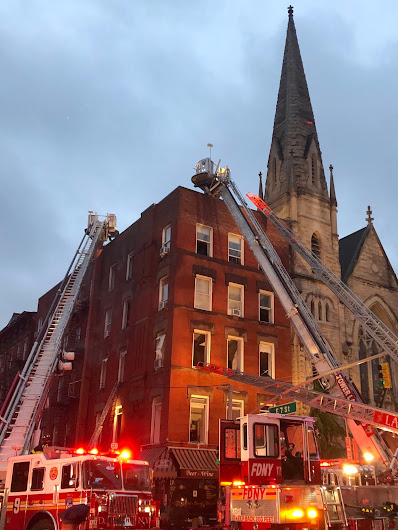 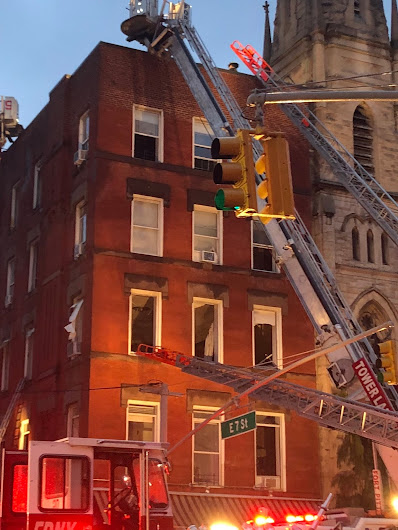 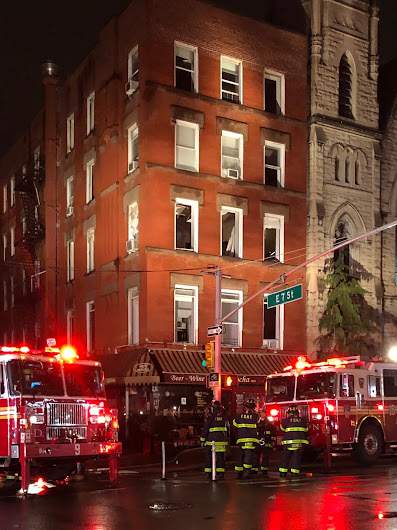 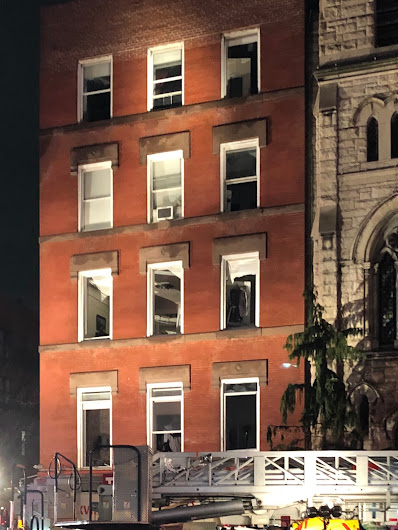 There was fire in the walls of all five floors..., officials said. The first floor is a restaurant and the floors above it are apartments.

Firefighters knocked out windows so they could reach the blaze inside. There were 140 firefighters at the scene.

Unsettling, considering what happened, diagonally across the street, a few years ago.

Fire is my worst fear in this city. My building has had fires on both sides twice and it's terrifying. This fire today made me flash back to the gas explosion and the dread rolled over me all over again.

The new young neighbors in my building like to burn scented candles, which they were doing as this fire (just a block away) was going on. It would take about 3 min for my building to burn. I wish the revolving tenants cared about these things.

I hope the restaurants haven’t been seriously damaged- two that feel most neighborly, Also, so glad the church has apparently not been damaged.

So awful, my heart goes out to all who live there

Any word on Middle Church? The church and its support building wrap around the building that was on fire. Thanks.

There weren't any reports of damage to the church...

My heart goes out to those whose homes were devastated.

Grieve, please tell us if there is any specific way we can help them.

This is heartbreaking. I live on 7th closer to C. I cross this corner each day and love how quaint this building is. I witnessed the horrendous fire in March of 2015 across the street, This intersection is besieged with tragedy and accidents. I hope those whose apartments were destroyed have refuge elsewhere. I feel every New Yorker's worst nightmare is becoming a victim to a fire where your entire home is gone within minutes. It's also sad to know firefighters were also injured too. They are the real heros. I am sending warm thoughts and wishes right now to all of whom were affected by this loss.

If there were rent controlled apartments in the building it may be problematic for the residents. In NYC leases may on occasion have a clause that allows the landlord to take the apartment back over from the tenant who will have no recourse to remain in residence. Landlords who are able to get people out of those type of apartments legally will have to repair damages anyway, so they can just renovate and break the rent control/stablization and then charge market rate when it is ready for habitation again.

I wish everyone who was living in the building all the best of luck and hope they and their pets are all well.

So sorry for all the tenants who have been displaced and only hope that they and their pets have found a safe haven. Fire is the City’s worst nightmare- to lose your home in a rapacious gentrification climate is pretty close to being in hell with little or no re recourse. Only hope people swill step forward to help them and for the City to protect rent stabilized/rent controlled tenants from landlords.