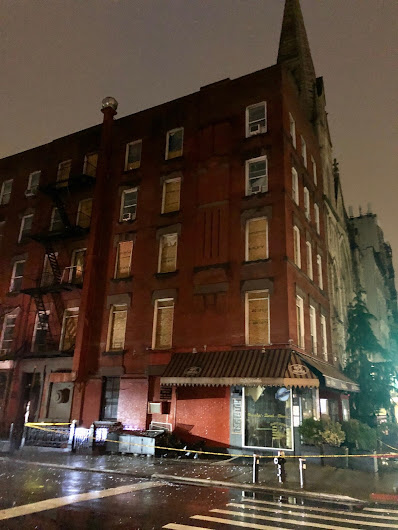 Here's a 6 a.m.-look at the southeast corner of Second Avenue and Seventh Street following the three-alarm fire that started here yesterday afternoon shortly before 4... 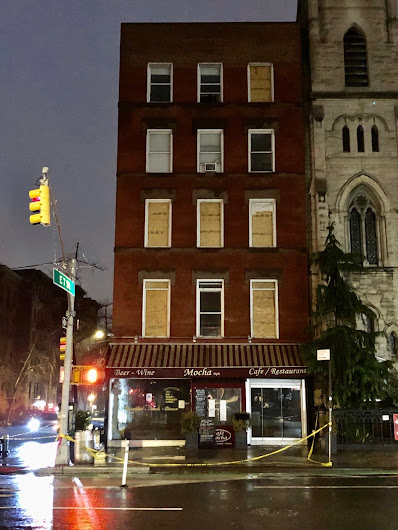 A lone police car is on the scene... 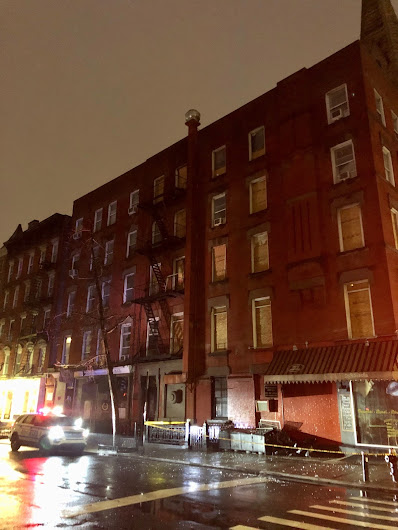 FDNY officials said that the fire started on "a lower floor" of the five-story building and spread up to the top floor before it was extinguished by about 140 firefighters, according to published reports. The cause is under investigation. Five firefighters were treated for minor injuries.

The owner of Cafe Mocha, the ground-floor restaurant, said he smelled the fire before the building went up in flames.

"I was in the restaurant and we smelled the fire coming from the bathroom. We smelled it, I think, coming through the shaft," owner Ghasan Ballan said.

"I feel bad for the residents, they have no home," he added.

No other word at the moment on the status of the two retail tenants here — Cafe Mocha and Via Della Pace ... or the displaced tenants of the building with 15 units.

One report said that the building suffered extensive interior damage.

I am a tenant of the building. Live on the top floor. Thank you all for your concern. All tenants and animals (including my 2 cats) are safe and sound. Thankfully my family is blessed with much love and support from family, friends and neighbors. According to my super, building has much smoke and water damage. Will take about a year to restore the building.

thank you for the update. I live on that block and a fire is one of my biggest fears. I feel so sorry for the residents and Mocca and Via Della Pace. I just had a glass of wine at Via Della Pace on Saturday.
Hope the restaurant and the Café will stay, and the building will be fixed soon and residents can return!

I hope everyone, residents, business owners and staff, will be well and return to the EV as soon as possible. I walked past the building at about 1 AM and could hear the workmen sawing and hammering to close up the building. and saw the police car keeping vigilance. So sad for everyone affected.

Did I miss any?

The numerous fires around the EV are terrifying. I wish these buildings were safer and more fire-resistant, I now feel extremely paranoid.

The biggest recent EV restaurant fires were the one on 1st Avenue near 12th St that destroyed Uogashi Sushi and led to the recent demise of Tree Restaurant in December, and the huge smoky fire on Broadway from 8th to 9th Street a couple of years ago that started in a deli and shut down Famous Famiglia Pizza, destroying dozens of apartments. There was also a fire in the building where Artichoke Pizza was originally located before they moved across 14th street. Just last December there was a duct fire at The Smith on 3rd Avenue, but they luckily survived.

This fire hits hard because in addition to the residents it affects both Cafe Mocha and Via della Pace, two favorite EV spots, and also because it is so close to the buildings destroyed by the gas explosion, which destroyed Pomme Frites and Sushi Park, killing two people and making many more suddenly homeless. The problem is these old buildings burn fast, so make sure you have a working smoke detector, a small fire extinguishers, and a plan to get out.

There was a fire in a residential building on East 3 Street between first and second ave almost two years ago. I wish everyone involved a speedy recovery on this. I know as someone that lived in the E3 Street building, the clean up can take awhile and I hope that they have a landlord that is supportive of them during this time.

I live on this block and just want to say that my heart goes out to all of you who were affected. So sorry this happened to you all but am also grateful that no lives were lost. I hope you get back into your apartments in record time. Many thanks to the world's best fire department, the FDNY, who expertly handles putting out fires like it's no big deal.

So glad there were no injuries.