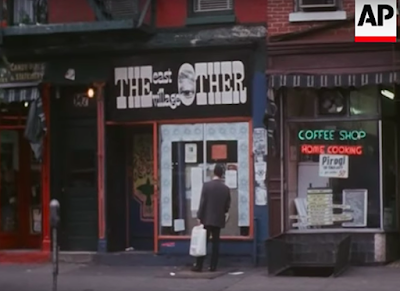 Updated 2/28: I didn't realize that my blogging friend Alex at the always-excellent Flaming Pablum posted this back in 2018.

In case you haven't seen this (the clip was new to me — thanks Winn!) ... here's 8 minutes of footage from the Associated Press dated Oct. 13, 1967, and titled "Hippies change scene in East Village." (The AP uploaded the clip to YouTube in August 2018.)

It was apparently part of a report (b-roll?) on the scene here — after the Summer of Love caught the attention of the mainstream media.

Unfortunately, there isn't any sound to the clip. At times, you get the idea that some editor told a crew to "drive around the neighborhood and film some hippies!"

You'll recognize several locations, like a glimpse of the Christodora House on Avenue B and some familiar places inside Tompkins Square Park (Temperance Fountain!). There are other shots of storefronts and businesses of local historical significance, such as the East Village Other office when it was still at 147 Avenue A, and the Diggers' Free Store at 264 E. 10th St.

Also, notice how few storefront vacancies there appear to be.

Anyway, enjoy ... watch it with your choice of music as a backdrop...

Email ThisBlogThis!Share to TwitterShare to FacebookShare to Pinterest
Labels: 1967, hippies

Wow. Another world. Hard to believe that little kids in that vid are now well into their 50s. People outside of the hippies dressed relatively formally back then---a guy in a Mr. Rogers cardigan and slacks, etc.

I couldn't help but notice the park looked a hell of lot cleaner, although those girls going barefoot in it was gross. Also, no dogs? The cars were so cool!

May I recommend the excellent 60s track "Time Has Come Today" by the Chambers Brothers.

Wow... A trip back to my childhood! All within a block of my home, Theatre 80. Charlie Brown had just opened at our place, and the Negro Ensemble Company was up the block. I went to the Electric Circus and the Dom... and the push carts really took me back. I am going to have to look at it in slow speed to see if I recognize any of the people. Thanks so much... Best to you and yours!!!

Village view was new then! That blows me away.

Given the date, I'm certain that this footage was shot as part of a news report on the murder of Greenwich, Conn. teenager Linda Fitzpatrick - which happened on Saturday night Oct. 7, 1967. She and her hippie friend James Hutchinson (aka "Groovy") were found naked with their heads bashed in with a brick in the basement boiler room of 169 Avenue B. These murders were seen as the advent of a crime ridden era on the Lower East Side...and they were also seen as exposing the dark side of "peace and love" hippie culture a la the Manson Family murders on the west coast.

Or wheelchair ramp curb cut -outs on the corner either!

I want to SPANGE all of them!

Wow...Amazing shots...quick one of the "Jesus Saves" sign on 11th Street. This does look like it could have been shot in early October 1967 by the coats/leaves on trees. Also, trees in the park are smaller and not very many trees along the streets.
It would be great to know if even one single store from that time is still in business.

@Edddie- There was no dark side to Hippie Culture. A few criminal individuals don't define an era. If you read Low Life there was plenty of crime in the EV in the 1900s. What changed the EV in the late 60's was an influx of cheap heroin. The actual dark side were the corrupt cops who took bribes from low level drug dealers which in turn allowed the drug trade to flourish. People reading this today might find it hard to believe but one could go to dozens of abandoned buildings in the EV, go inside, tell someone you couldn't see behind a wall what drug you wanted (weed, coke, H), put your money into a hole the wall and walk out with your party supplies. Places with the best shit would have waiting lines forming to get in.

Let's do the time warp again!

@XTC - I well remember, in the early 1980s, the drug dealers that flourished on the southeast corner of 11th Street and Avenue A; more than once I would see a beat cop (yeah, they used to have them in those days) standing cattycorner on the northwest side of the intersection idly watching the in-your-face transactions and doing nothing about them, because they had been told not to by their higher-ups at the Ninth. I also remember more than once seeing a body bag taken out of one of the abandoned-save-for-the-shooting-galleries buildings across from my apartment, where rich white kids had gone in, copped, shot up and croaked. Those were the days.

All those wonderful cars + great small shops.Not a Big box in sight.Wish I could turn back the clock!

Hi. Truly appreciated this walk back in time. Wonderful memories of the EV. Particularly, the Psychdelicatesssn!

This was great! Took me about half an hour to watch because I kept pressing the pause button to study the scenes.

Like another commenter said, the park was much cleaner and also had a different layout. So many chess tables!

Thanks for this, I look forward to trawling through it again.

Thanks. I actually can use the word cherish to describe most of my feelings & memories of living on East 11th. Was briefly for a couple of years out of four spent in the city. It was for me a neighborhood. I had friends mostly developed from hanging at Brownies before it became a music venue. Brownies opened when we were living at the corner. Lived in the city from '87 to '91. "Great life long as you don't weaken." paraphrase of Dos Passos applies.

Garfinkel Pharmacy?! I wonder if it’s the same Garfinkel landlord/family that sold their buildings to the infamous Raphael Toledano!

Will have to rewatch, but Gelb Lighting maybe the most long-lasted holdout from that era?

Gelb Lighting was at 151 Avenue A when this film was shot, they later moved further south down the the avenue and were there for many years. I love that part of the film because my store Live Shop Die occupied the old Gelb space at one time, and I well remember Stanley's, the little Polish Diner you get a glimpse of there on that same block. Great little time capsule!

My family owns the building that says Coffee. Stanley was our tenant and I was 3 years old when this photo was taken. I am happy to say that we still own the building and instead of a coffee shop, we have a fabulous hair salon there called D'lala !!!!!!