Another look at the incoming tech hub 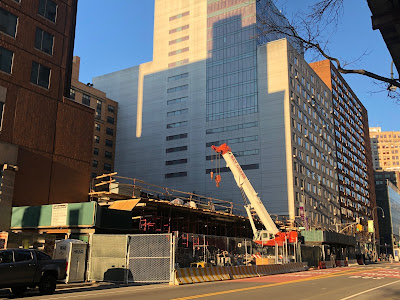 Quick update on progress at the tech hub (aka Zero Irving) on 14th Street between Third Avenue and Fourth Avenue.

Late last week workers started on the deck for the third level of what will be a 21-floor building... 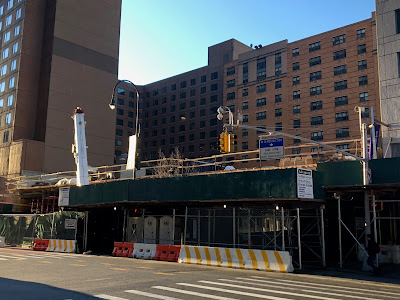 Workers also completed installation of the sidewalk bridge along 14th Street to move pedestrians inside the building footprint ... 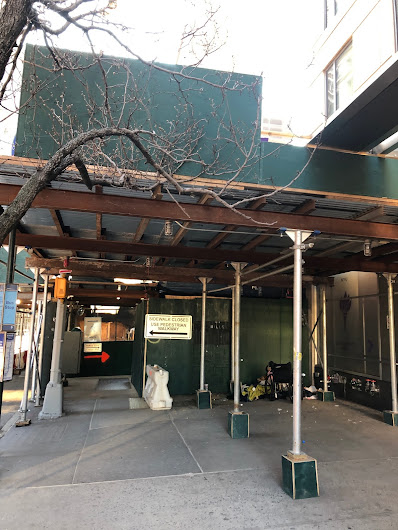 One full lane of 14th Street has now been blocked off outside the site for construction work. In July 2018, during a televised hearing, the reps for the developer promised that all demolition and construction work would be done within the bounds of the property. That obviously isn't happening.

The building, developed jointly by the city’s Economic Development Corp. and RAL Development Services, will feature 14 floors of market-rate office space as well as "a technology training center and incubator, co-working spaces, state-of-the-art event space, and street level food hall on the seven floors beneath," per the Zero Irving announcement issued last October.

The project, championed by Mayor de Blasio and initially announced in early 2017, passed through the city’s Uniform Land Use Review Process earlier in 2018, capped off by a unanimous City Council vote — led by local Councilmember Carlina Rivera — in August 2018. A rezoning was required to build the the structure, which is larger than what current commercial zoning allows.

The approval came despite the pleas of some residents, activists, small-business owners and community groups who had long expressed concern that the rezoning necessary for the project would spur out-of-scale development on surrounding blocks.

The new building, on the former site of a P.C. Richard & Son, has a completion date for the spring of 2021, per the renderings onsite.

Previously on EV Grieve:
First sign of the tech hub — aka Zero Irving — above ground on 14th Street
Posted by Grieve at 4:15 AM

"In July 2018, during a televised hearing, the reps for the developer promised that all demolition and construction work would be done within the bounds of the property. That obviously isn't happening." - Many, many thanks to Mayor diBlahblahblah and Car-lie-na for stepping in on behalf of their constituents and making sure the developer held fast to the terms of the agreement not to disrupt or inconvenience street traffic and pedestrians! Always good to know that our elected officials have our backs!