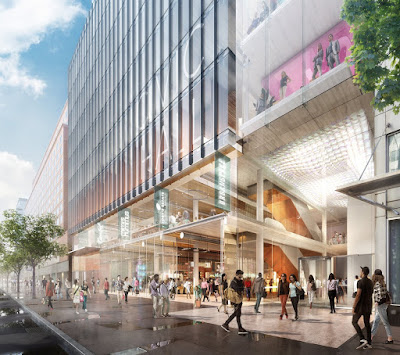 This was the last stop in the approval process for the project, which is being developed jointly by the city’s Economic Development Corp. and developer RAL Development Service. The 240,000-square-foot building will feature Civic Hall, which will offer tech training for low-income residents, as well as market-rate retail and office space. (Last week, Microsoft reportedly provided a $100,000 grant for the planning and development of the Tech Training Center.)

The de Blasio administration proposed the so-called tech hub as part of the mayor's "New York Works" initiative, which they believe will create up to 600 jobs.

The vote yesterday came despite the pleas of some residents, activists, small-business owners and community groups who have long expressed concern that the rezoning necessary for the project would spur out-of-scale development on surrounding blocks.

During her campaign, Rivera had promised to seek a separate rezoning for the surrounding neighborhood to establish height limits and, in some cases, cap commercial square footage in exchange for her support of the hub. The administration had balked at the idea of curtailing office space, and a compromise was expected to take the form of landmarking some buildings and requiring special permits for new hotel development.

In a statement to amNY, Rivera said: "I am voting yes today for a tech hub that will bring true community benefits, tech education, and workforce development services that will finally give women, people of color, and low-income New Yorkers access to an industry that has unfairly kept them out for far too long." (See below for a statement that Rivera sent her constituents yesterday afternoon.)

The Greenwich Village Society for Historical Preservation, which had lobbied for protections for the surrounding neighborhood as a component of the tech-hub plan, released this statement from executive director Andrew Berman:

The City Council's deal approves the Mayor’s Tech Hub with just a fraction of a fraction of the protections the surrounding neighborhood needs and called for, and which Council member Rivera promised to condition her vote upon. The approval of the Tech Hub will accelerate the transformation of the adjacent Greenwich Village and East Village neighborhoods into an extension of ‘Midtown South’ and ‘Silicon Alley,’ which many developers and real estate interests have already begun to call them. It’s a shame that the Mayor is so invested in protecting his real-estate donor friends that he would not consider real but reasonable zoning protections for the area that would have prevented this kind of unnecessary development, and encouraged residential development that includes affordable housing.

Proud 2 work 4 a strong Latina - born & raised in the LES - who gave #District2 residents, especially our Black & Brown communities, workforce & training opportunities. It's not everyday a kid from the PJs can experience this reality but because of @CarlinaRivera it will happen.

Big thanks to NYC Councilwomen @CarlinaRivera for her leadership and support for @civichall's tech training center on14th St, which the council approved today. The community benefits will be substantial and long-term. #civictech

Really proud of my @NYCCouncil sister @CarlinaRivera. These things are NEVER easy but CR managed to thread the needle with skill & grace ensuring benefits reach the communities that need them most AND that the surrounding neighborhoods are protected. Boom. https://t.co/OSNDRalIcY

In particular, I need to thank my Councilwomen @CarlinaRivera for balancing the demands of facilitating @civichall's project, so that the TechHub will fulfill its mission of providing jobs training & activating civic engagement, while ensuring all her constituents can thrive. https://t.co/YwCjrdLGaC

Many thanks to @CarlinaRivera’s leadership, @CivicHall’s Union Square project can begin to level the #tech playing field 🙏🏼🎉 #letsbuildtogether #civictech https://t.co/TC952X7aid

@CarlinaRivera You sold us out. I thought you were good on protecting our community.

The "local protections" are a fraction of a fraction of what we were fighting for, what we need, & what you promised to condition your vote upon. This will result in an acceleration of bad=out-of-character development in Greenwich Village+E. Village: https://t.co/2PhJeEDKKs

Give me a break. These "protections" are paltry. You sold out the community, and we won't forget it.


Shame on you, @CarlinaRivera. I voted for you because you promised to make zoning restrictions in our community your top priority. You did no such thing with your vote. Is this how you keep commitments to your constituents? https://t.co/8tsxY8xv6l

And here's Rivera's letter — this link goes to the full version, which outlines her rationale for the yes vote...

Please read my letter to my community about today’s vote. The Tech Hub will build a bridge for our neighbors to great jobs & with local protections secured. We will continue working towards preservation & making our neighborhood stronger. https://t.co/rmIST9vZ3j pic.twitter.com/rZtyzMjXVE


Meanwhile, an EVG reader shared this photo from Tuesday... the reader reported that several of these flyers were posted near the 6 stop at Astor Place... 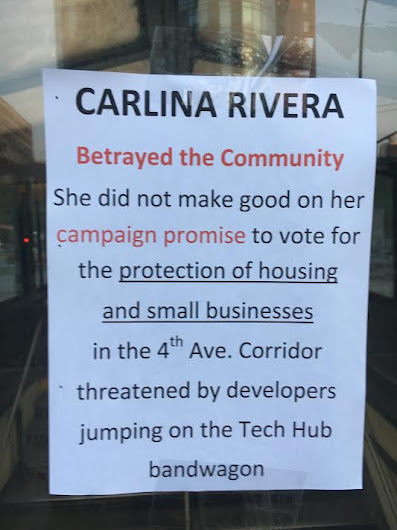 In all fairness, there was no precedent in tying an area rezoning to a single-site ULURP. The only leverage that Rosie Mendez and Carlina Rivera had in this whole process was a potential "No" vote on the Tech Hub site... The city called their bluff. That any concessions were achieved at all is a small miracle. Who expects REBNY to hand over their support of a broad downzoning (a catastrophe for their members in the area) in exchange for one building?

Regardless of the Tech Hub (because without the Tech Hub, redevelopment is coming) the area could use new zoning. That process is not necessarily over. And pretty much everyone wanted the Tech Hub, so at least that is happening now without any further delays. But it would have been good to have achieved more at this point.

She protected her political future not the East Village.

"community benefits" there will be no community now that the floodgates of over development have been open. Those that could benefit from the Tech hub may not have an affordable place to live now that mid-south has officially begun.

I have written Rivera and expressed my deep disappointment in her vote and betrayal. She caved to political pressure and fell back on the emotional slogan (for our children) excuse. You are done Carolina, I will actively support her next political opponent when she runs for re-election. She could have been a hero of this community now she is the disgrace.

Carlina Rivera, along with other politicians, only tell you what you want to hear so they can get voted in. Then they betray their constituents. You were voted in; you can be VOTED OUT!

I hope the Times follows this story to see how many jobs are created and who they are created for. I am very suspicious of this whole enterprise. Prove me wrong.

That’s right, lets blame a brand new city councilwoman for not singlehanddledly stopping a project that REBNY and DeBlasio backed, and which was unanimously approved by both the City Council and Community Board 3. This was a done deal already. A no vote would have sacrificed the few but meaningful concessions she did manage to get. A no vote on a single building would have no effect on area zoning issues which are yet to be determined, and a glass tower would have been erected anyway. Instead of criticizing one of the only allies the EV has in terms of affordable housing and protecting the community, perhaps its time to get a reality check on what Rivera and all of us are up against. The fight isn’t over, so lets rally around the few politicians who are on our side instead of irrationally overreacting to a single building has a boatload of more job and training benefits than PC RIchards ever offered this community.

Rivera is a traitor to her community. She says one thing or says nothing(BOYS" CLUB) then does the ONE PARTY RULE bidding and votes to destroy her community. And what does she say? The usual bullet points the ONE PARTY RULE hands out to its elected officials(read that as slaves) Oh, I voted for it because of the educational aspects, and the great jobs and the blahblahblah. What a load of it... TRAITORTRAITORTRAITOR...RECALL! RECALL!! RECALL!!

Carlina Rivera just totally sold out this neighborhood. I will NEVER vote for her again for ANY elective office, and I have already written to her saying exactly that.

She ran on the "I'll protect the neighborhood" promise, but she's now proven herself to be just one more political hack who will say one thing and do another.

I want to know who "got" to her to make her change her vote - did she get $$$$ in exchange for selling us down the river, or did she get something else?

Even if her one vote would not have stopped the Tech Hub, it would have been a powerful indicator that De Blasio and his developer friends can't just walk all over this neighborhood unopposed. But Rivera didn't even have the backbone for that one vote.

She may have set a record for how fast a new council-member can PROVE they are worse than useless. Can we recall her and elect someone who isn't a complete weasel?

Yes I do blame a single councilwoman for throwing away the only tool this neighborhood had to push back against the pro REBNY mayor. She had one mission and that was to prevent "mid-town south" from swallowing up our small businesses, affordable housing, historic building and quality of life. There will be no stopping development now or Broadway and 4th Ave now. Don't make excuses for Carolina Rivera and don't buy into hers. This tech hub was the perfect Trojan horse for REBNY to demolish the East Village and fill it with more Death Star buildings and luxury housing.

@12:59PM: Exactly right! Her obligation was to REPRESENT THE NEIGHBORHOOD, which she did not do. She didn't even TRY.

The Tech hub may or may not be good for the area, that is left to be seen. HOWEVER the site that the tech hub sits on, which is on 14th street, which has a totally different character that the rest of the neighborhood, and really has nothing to do with the third of fourth avenue corridor.This rezoning was for a very minor change. The tall building could be built on that site by right and would have happened regardless. By negotiating for the rezoning of that site they were able to get a few concessions from the developer. Holding that site(and the few concessions that were received) hostage until the third and fourth avenue rezoning is undertaken is not realistic. That site honestly does not have a huge impact on the rest of the neighborhood.The bigger problem is the new buildings further down along 14th street between 1st and avenue C, why is not one protesting that, that is more of a threat to our neighborhood than the tech hub?

The Tech Hub should have never been held hostage for a downzoning, and I'm happy that Carlina Rivera saw fit to approve it as is.

We should be encouraging good jobs for our neighbors in Alphabet City and the Lower East Side, not using the space as a poker chip to encase the neighborhood in amber.