On second thought, Jiang Diner is moving back to 5th Street 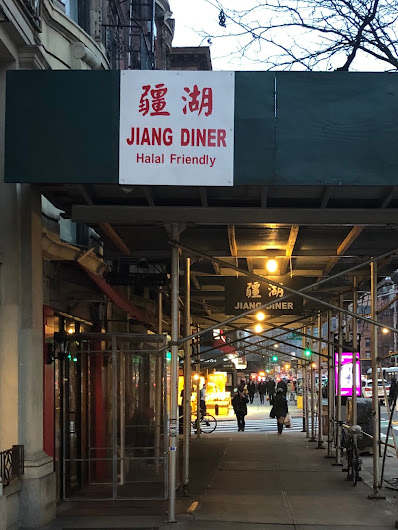 After six weeks at 104 Second Ave. between Sixth Street and Seventh Street, Jiang Diner is returning to its previous location at 309 E. Fifth St. between First Avenue and Second Avenue ... 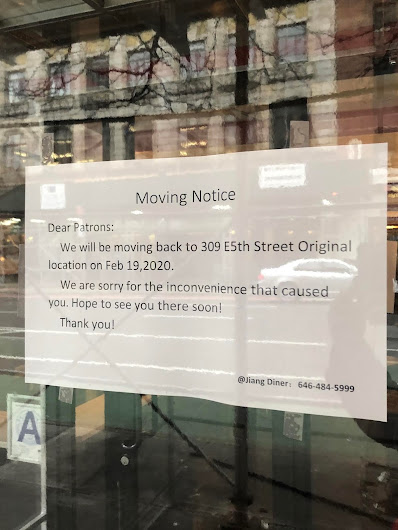 There isn't any reason cited on the note to patrons, other than that Jiang Diner, which offers Northwestern Chinese cuisine, including the popular Xinjiang big plate chicken, will be back on Fifth Street starting today.

So to recap: Jiang Diner, which has been a hit since opening last spring on Fifth Street, moved to the former Hot Kitchen space on Second Avenue. (According to the Times back in August, Tao An, the owner of Jiang Diner, was also behind Hot Kitchen.)

The Fifth Street location was set to become a quick-serve establishment... 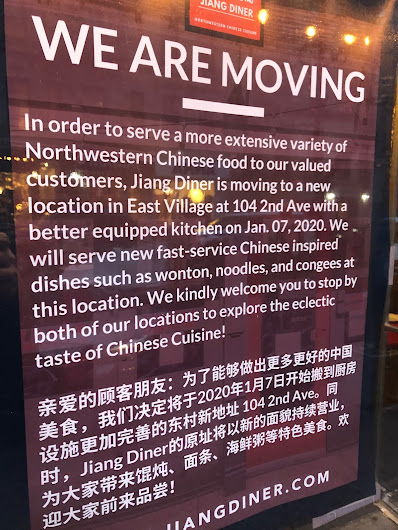 So 104 Second Ave., long stuck under that sidewalk bridge, will be vacant again. As we've noted, Hot Kitchen, the Sichuan specialists, went from serving terrific food to a more pedestrian hotpot.

At the beginning of December, the restaurant started offering Japanese cuisine under the name Sushi & Sake. That venture lasted a short month.

Thank you to Steven for the photos and tip!

wtf are they doing? They used to be good as Hot Kitchen, before they messed up their menu and stopped delivery.

I don't ask much for service but Hot Kitchen's was really bad.

How much money has been spent on printing menus, building websites, etc for the constant changes by this restaurant owner? I hope he has enough left to hire good cooks...

Hot Kitchen was really good. Bring it back to it’s old space. I don’t know why he changed it to hot pot when there were already two others within two blocks...

at least they'll still be in the nabe the food is off the chain good here and the service at Jaing diner incarnation was great! guess i'll be waling the extra block to grab some of dem amazin' dumplings
promise i don't work for them :)