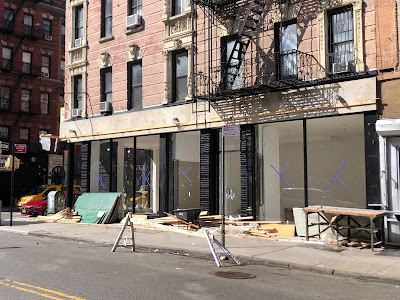 Workers are removing the plywood from the retail space on the northwest corner of Fourth Street and Avenue B... revealing the all-new storefront that will soon house the the Half Gallery... 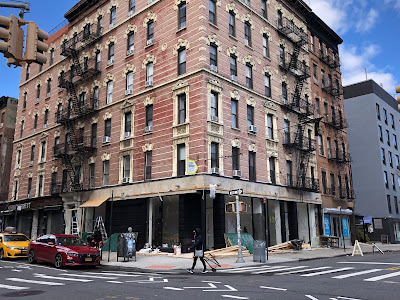 In mid-December, the gallery announced it was relocating from the Upper East Side to 235 E. Fourth St.

The gallery, which has worked with Rene Ricard, Louise Bonnet and Nathaniel Mary Quinn, started on the Lower East Side in 2008 before heading north. Here's more via ARTnews:

Bill Powers, who founded Half Gallery, said that many of the artists the gallery has worked with “have a real connection to [the East Village] and that art scene,” adding that the move is “a little bit of a homecoming.”

With the Swiss Institute, the Brant Foundation, and other art institutions opening in the East Village recently, the neighborhood remains a hotspot for art, Powers said, adding, “We used to get a bigger crowd for openings when we were downtown because I think the gravity of the art world, spiritually, is downtown or in the outer boroughs.”

The gallery takes the space of Tapanju Turntable (and Kate's Joint until 2012!).

The exterior is already a marked improved over the Turntable front, which had the warm, inviting look of a visitor's center at a North Korean prison. 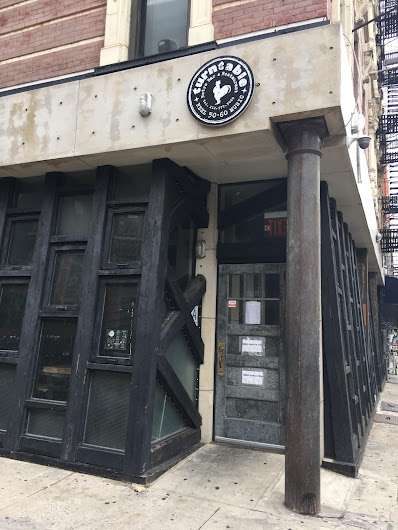 Email ThisBlogThis!Share to TwitterShare to FacebookShare to Pinterest
Labels: 235 E. 4th St., the Half Gallery

"which had the warm, inviting look of a visitor's center at a North Korean prison." lol
I was a bit confused when it opened, such a weird facade for a fried chicken place. From what I heard, they had no turntables, just reel to reel players.

I have to admit, that exterior is part of why I never walked in that place...

Agree with the critique of the old Turntable, what were they thinking, did it have some architectural or cultural significance which nobody could reference? I just found out it was actual a restaurant after reading this, wow.

Always thought that was a weird and uninviting store front. Still miss Kate's.

Haha, I always thought the chicken place looked like the hull of a prison ship.

And that wasn’t chicken either.
Just Sayin’

I wonder if North Korean prisons do actually have visitors centers. Maybe ones with just entry doors, no exit ones?

RIP Kate's Joint. Does anyone know if she ever opened another restaurant? Would travel anywhere for her faux popcorn "shrimp"...