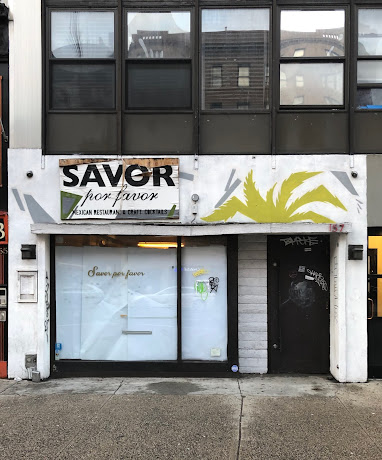 There are hints of activity at the rather beleaguered restaurant space at 157 Second Ave. between Ninth Street and 10th Street.

The for rent sign has been removed... and paper now covers the front windows. We haven't heard any info on a new tenant just yet.

As noted in previous posts on No. 157, this has been a challenging space to make work for any length of time.

Last August, the Marshal seized Savor Por Favor, the Mexican restaurant-bar that opened in October 2018. The previous tenant, Yuan, which shut down in July 2018, also didn't make it to a 1-year anniversary.

The previous tenant, Wylie Dufresne's bistro Alder, called it quits after two-and-a-half years at the end of August 2015. (There was a rumored rent increase, per Eater.) Other recent restaurants here (before 2013) included Plum and Cafe Brama.

Would be nice if the new venture lasted more than a few months...
Posted by Grieve at 4:00 AM

I'm willing to bet that if the 13th Step disappeared, all the businesses on that block would thrive.