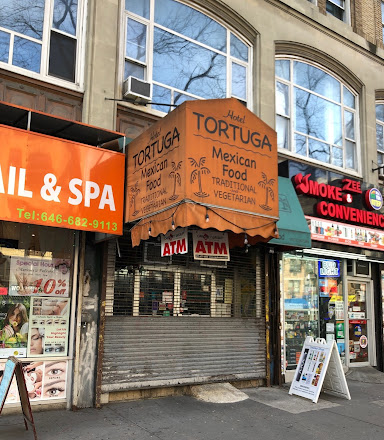 A bad sign at Hotel Tortuga on 14th Street between Second Avenue and Third Avenue — the Marshal came calling late last week ... and the space is now in the legal possession of the landlord... 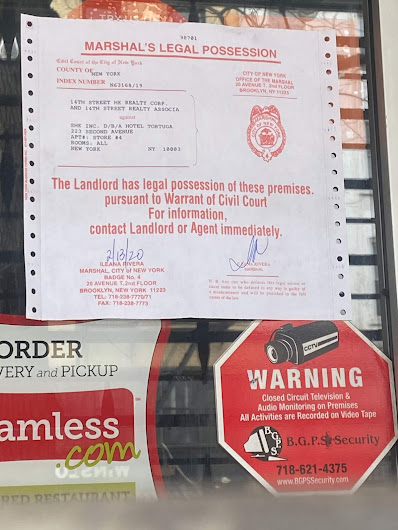 No word yet about a closure here. The Hotel Tortuga website is offline, and their social media properties haven't been updated since 2018. The phone is also out of service.

A new owner took over the inexpensive Mexican restaurant in November 2017. Staff and menu essentially stayed the same.

The previous owners, David and Jean LaPointe, first opened Hotel Tortuga in 2010. They also ran Curly's Vegetarian Lunch one block to the east on 14th Street until the end of 2011.

Previously on EV Grieve:
Hotel Tortuga, under new management, will reopen soon still as Hotel Tortuga
Posted by Grieve at 4:15 AM

This is a real shame. I recall that after they last closed and reopened a couple years ago, we went in for dinner and asked the woman that always seemed to be working there what had happened. She said the landlord had contacted the staff after the closure and asked if they wanted to keep running the restaurant.
When they said they did, he told them they could just keep running things themselves with essentially the landlord being in charge. I guess things have changed since then...

This is sad to me. I loved the OLD Tortuga. It was perfect.
Once the old owners left, the place had unwelcome changes, like the addition of a TV.
It just didn't have the same warmth and charm.
But the Hotel was great while it lasted.