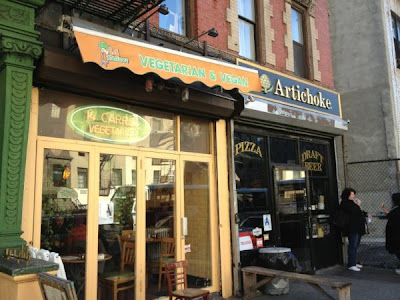 Over on East 14th Street, Curly's Vegetarian Lunch is now 14 Carrot Vegetarian, per this photo and tweet via @SamStorer ... Turns out that Dave and Jean, who ran the place the past six-plus years, moved on at the end of 2011. From the Curly's website, "[T]he new leases terms proved just too much for a little vegetarian place..."

However, the Curly's folks are still serving vegetarian fare up the street at Hotel Tortuga.

We don't know too much about the new management at 14 Carrot. Sam says the vegan pancakes are still quite good. Meanwhile, the three Yelp reviews have been fairly brutal.
Posted by Grieve at 6:34 AM

That really sucks - one of my favorite places for brunch - mostly because Dave and the regular long-time staff were friendly and the food was good.

Just chalk it up to more greedy landlords who don't see value in working with long-term tenants and businesses. I went to 14 carrots and they were trying to pass themselves off as the same business - just a name change - so I'm annoyed to see that they were lying.

Even though the food was decent, I'm inclined to find a new place and hope that they (14 carrots) fail in order to prove to landlords that screwing local, hard-working tenants is a poor business decision.

I was in there mid December and was told by the staff that the space was taken over by the owners of Artichoke and Led Zeppole. Can anyone confirm?

Confirmed....Saw dave yesterday....Rent was to damn high so he worked something out with the artichoke boys.

They're serving MEAT at hotel tortuga. wtf? see ya.

Curly's / 14 carrots is indeed gone from that space. I walk by it everyday and in the span, seemingly, of one day the place was gutted and transformed into an extension of Artichoke. Guess I can never have that delicious Santa Barbarella sandwich again, woe.

Wait a minute. Im late ...Just finding out about this. I was planning another visit and this pulled up on the internet.What happened to my boy "Curly?" He was a sortta crazy Christopher Lloyd type.This is sad news.